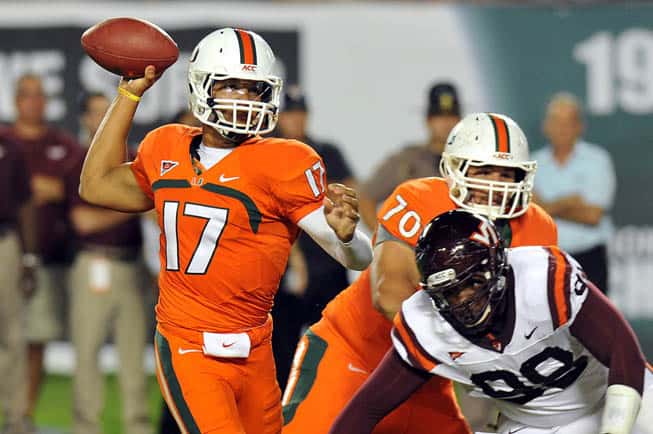 Another week, another Florida State demolishing of a top conference contender. Just weeks after the Seminoles hammered Clemson, Miami became FSU’s latest victim in a 41-14 loss at Doak Campbell Stadium. Those two high-profile victories have Jimbo Fisher’s club at the top of the conference standings and near the top of the BCS standings.

With the Seminoles seemingly all but in the fold to play in Charlotte, the focus now turns to the team that will eventually oppose them in the Queen City, along with the other schools that will fill the ACC’s eight bowl berths. Florida State is obviously bowl-eligible, along with five other clubs (Clemson, Miami, Virginia Tech, Georgia Tech and Duke). One team has five wins, with four additional clubs at four wins. The last four weeks of play for the conference’s teams shape up to be an exciting time. We’ll get the ball rolling on those last four weeks…right after we ask you this week’s trivia question!

ACC Trivia, Week 11 (answer at the end of the article): The Virginia-North Carolina rivalry has been played 118 times. Which two rivalries are the only two to have been played more often?

Program guide: This looked a lot more like a potential Coastal Division championship game just seven days ago than it will at 7:00 Saturday night. There is still a great deal of significance behind this matchup, however. The Hokies enter the game on a two-game losing streak, having fallen to Duke and Boston College. Virginia Tech had somewhat of an offensive anomaly against the Blue Devils, rushing for 173 yards. That total quickly fell back to expectations last week, as the Hokies ran for just 55 yards against Boston College.

The Hokies have rushed for 76 yards or fewer five times this season, with four of those outings coming against conference teams. Virginia Tech averages just 81.4 yards against conference opponents, even with the great output against Duke. Miami surrenders just under 173 yards per game on the ground against ACC opponents, including 192 yards last week against Florida State. The Hurricanes are 3-0 when opposing teams rush for fewer than 100 yards, so the Hokies need to beg, borrow or steal to cobble together a run game to keep Miami on their toes.

Miami has its share of concerns in running the football, as well. Star running back Duke Johnson will miss the remainder of the year after breaking his ankle against the Seminoles last week. This injury vaults touchdown maker Dallas Crawford into the starting lineup for the ‘Canes. Crawford has carried 67 times for 294 yards this season, including nine scores. The sophomore has shown the ability throughout the season to take over a game on the ground and help control the tempo. If he can do this against a stout Hokie rush defense (ninth in the FBS – 102.7 yards per game), he can set up the suddenly-stout combo of quarterback Stephen Morris and receiver Allen Hurns.

Both teams have been quite effective at getting pressure on the opposing quarterback. The Hokies and Hurricanes have combined for 49 sacks and 113 tackles for loss. Logan Thomas had ample time to check his progressions and throw the football against Boston College, passing for 391 yards. Getting extra pressure on Thomas may lead to high and rushed throws, allowing the ball-hawking Hurricane defense to do what they do best. The ‘Canes are tenth in the FBS in interceptions (14) and 14th in turnovers gained (21).

Despite what happened to both teams last week, this game shapes up to be a defensive battle. The Hurricanes have won just three of the last ten matchups between the two, however. Virginia Tech will look to avenge last year’s 30-12 loss, and with the nation’s third-ranked defense, the Hokies will be more than ready when toe meets leather in south Florida on Saturday night. In a somewhat down week across the country, this is a true “must-see” game.

Trivia answer: I asked earlier: The Virginia-North Carolina rivalry has been played 118 times. Which two rivalries are the only two to have been played more often?

Only Minnesota/Wisconsin (122 games) and Kansas/Missouri (120 games) have been played more.

Too bad Kansas and Missouri no longer play each year having met that many times. West Virginia and Pittsburgh no longer play anymore either and they have met 104 times.
Looking forward to seeing my Canes beat VT again this year like last season. ND at Pitt might be interesting too.