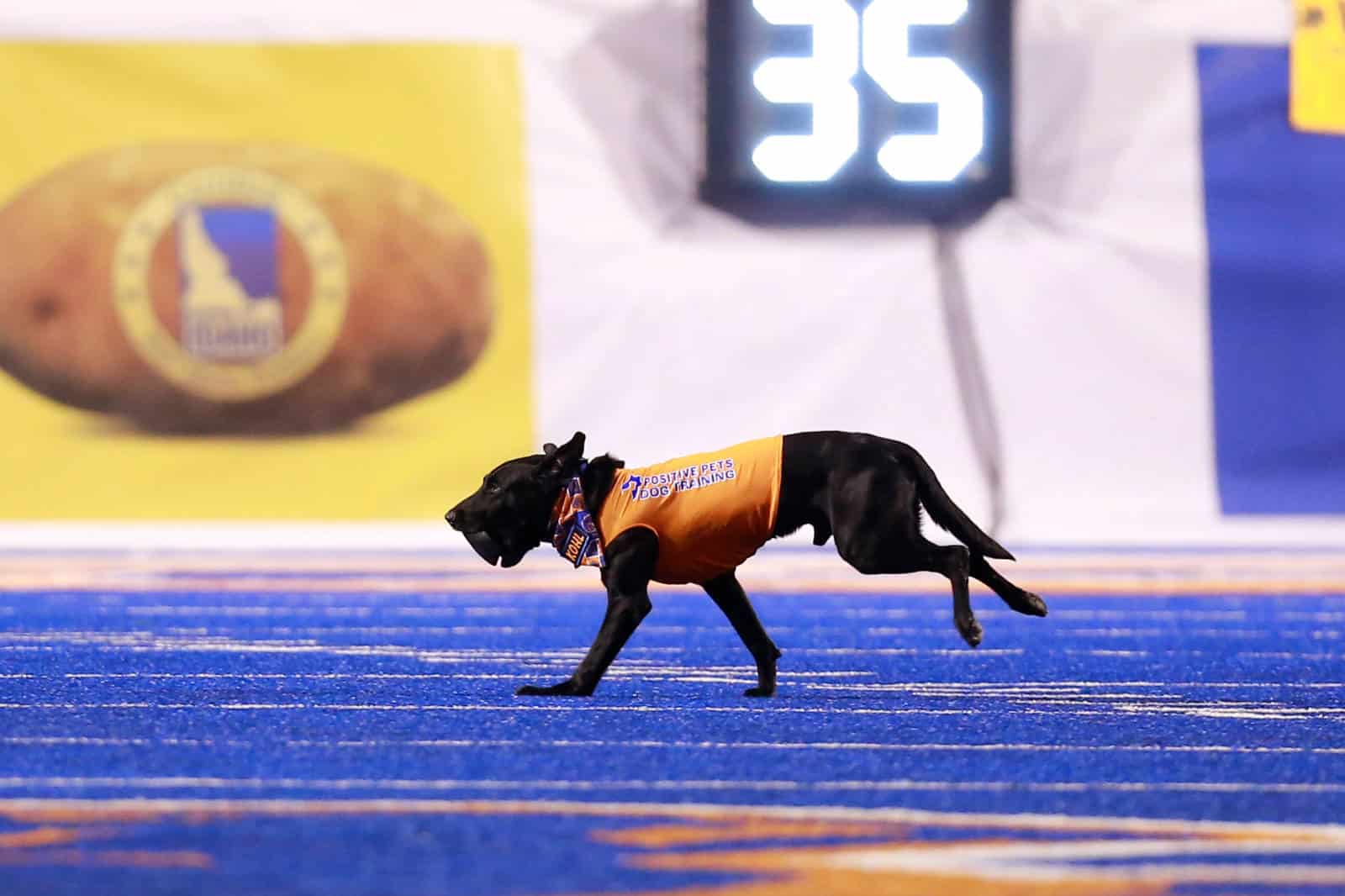 After a largely pedestrian slate last week that seemed to end as the sun went down, we await a fun Week 4 slate that includes multiple huge ranked-versus-ranked matchups, a test of Shane Buechele’s mettle as SMU’s newly-minted leader at TCU, a number of key intersectional tilts, and much more. If you’re looking to melt into your couch or favorite recliner and watch a game or 25, this is one of your best early opportunities to do so. Of course, the weather in much of the United States (except for south Texas, and our most sincere prayers to our friends over there as they battle the remnants of Tropical Storm imelda) has been absolutely outstanding, so you might consider taking your radio or favorite streaming device outside for part of the day.

We’ll simultaneously look back and ahead (which is tough to do, but we’ll manage) at the world of college football, but we’ll first ask you probably the oddest trivia question I’ve ever posed in eight seasons of this feature.

TRIVIA (answer at the end of the column):  Which two FCS schools share a fight song (same song, different lyrics)?

TAKE OF THE WEEK:  I should set this up, but let’s just get straight to the take.

Folks. Situational. Awareness. When you’re 0-2, you probably don’t want to start mouthing off to the quarterback of the team that’s about to make you 0-3.

To use your words, good sir, Jalen took your soul.

TAKE OF THE WEEK, PART 2:  Since nobody seems to have any situational awareness…

Funny, sure, but when you can’t even get within five touchdowns, maybe it’s time to tap the brakes on the attempts to roast people.

North Dakota State 47, Delaware 22: This set up for Delaware to have the chance to avenge a crushing defeat by the Bison. The Blue Hens had them in Delaware Stadium, with both teams ranked, and the eyes of the world — the FCS world, at least — laser-focused on them.

The Bison nearly doubled the Blue Hens in first downs (26-14), better than doubled them in rushing yards (295-125), and pretty much reminded everyone why they’ve won all but one FCS national championship seemingly since the Lewis & Clark expedition.

NDSU now heads back to the Fargodome to welcome fourth-ranked UC Davis (about which we may speak here in a bit). Delaware heads back to the drawing board, where it looks to rebound against Penn, who is opening its season this weekend with the visit to the Blue Hens.

Washington 52, Hawaii 20:  Yeah, next time your coach starts feeling himself a bit too much and tweets a photo of the Rose Bowl logo, you might want to tell him to tap the brakes before his team finds itself trailing 38-7 after 30 minutes of play. Hawaii had 16 third-down tries, and converted just seven of them. Combine that with being picked three times, and…oof.

So ends the Mountain West’s recent dominance over the Pac-12, and, likely, Hawaii’s relevance (on the national stage, anyway) in 2019.

Virginia 31, Florida State 24:  It was a great night for Virginia fans. Then, panic set in. Virginia missed an extra point (#CollegeKickers), and the same looming dread UVa supporters have come to know as an old friend made an appearance.

Then, as the great Caroline Darney chronicles, Bryce Perkins escaped sure doom in the backfield, and dashed seemingly 200 yards for a two-point conversion. Minutes later, the Cavalier defense somehow staved off a last-second attempt by the Seminoles to tie the game, and the incredulous rush of the field ensued.

We’re only a couple of weeks in, of course — and I might, admittedly, be a little biased — but I’d have to throw this one on the games of the year list — to date, at least.

Note:  Lest I be corrected on any of these choices, I know about Notre Dame-Georgia, et al. Again, we’re looking for games just outside — or way outside — of the proverbial top tier.

It’s always great when we get meaningful, non-P5 conference matchups before October even hits, and we have one on the blue turf right as many of us here in the east get home from high school football.

The Falcons started the season by throttling Colgate, then pulled off a fairly impressive 30-23, overtime victory at Colorado last week. The victory was a little close for comfort, as the Buffs scored 13 fourth-quarter points to force extra time. Kadin Remsberg tallied 25 of his 146 rushing yards on the first play of the final drive, scoring a touchdown on the lone offensive play the Falcons required to take home the victory. Air Force employed a — let’s call it efficient — passing game in the victory, as Donald Hammond III completed 7-of-12 throws for 155 yards, despite 113 of those yards coming on his two touchdown tosses.

Boise, meanwhile, got a bit of a much-needed breather with a 45-10 victory over Portland State last week, following nail-biters against Florida State and Marshall. The Broncos are, as usual, well-skilled on offense, with their 516.3 yards of total offense per contest hovering behind only Utah State and its 656.5 per in one fewer outing. Freshman quarterback Hank Bachmeier has connected on greater than 61 percent of his throws early on, though his 4:3 touchdown-to-interception ratio is a bit of a worry.

One item to follow:  Boise ranks 41st in the nation in rush defense, allowing 3.54 yards per carry. Of the 92 opponent carries against Boise’s defense, only two have reached the end zone. That performance will, obviously, need to continue against the Falcons’ ground game.

Do I really have a choice here? If you are at all a connoisseur of FCS football, this is one of those matchups you absolutely cannot afford to miss. The Aggies and Bison tee it up for the first time in 12 years — would it surprise you if I told you NDSU handily won that game? — with at least one of these sides decidedly different. Dan Hawkins guides his UC Davis club (and they ain’t intramurals, brother) into the Fargodome with big-armed quarterback Jake Maier at the helm  Maier slung the rock 49 times last week, completing 38, in a 41-13 drubbing of Lehigh. Four of those Maier throws found the paint, with Carson Crawford hauling in nine throws and a score.

Whether Davis’ defense can slow the Bison juggernaut will be the real mystery here, and few teams have had the answer. The team is an utterly ridiculous 57-5 going back to the start of the 2015 season, and just as it didn’t miss a beat when Craig Bohl left for Wyoming following the 2013 campaign, it has similarly kept rolling following Chris Klieman’s departure for Kansas State. This game marks the second in a gauntlet of four straight likely ranked teams for the Bison, with only a home tilt with Missouri State providing a much-needed respite before a trip across the border to face current-number three South Dakota State.

To put a fine point on it:  If NDSU wins its eighth national title in nine years this season, it might be the most remarkable of them all.

This game took on an interesting twist in a hurry. Sure, there was always some heat to the “once-in-a-lifetime” game — Mack Brown’s first game as a head coach came for App just over 35 years ago —  but App’s continued rise and UNC’s hot start under freshman Sam Howell have drawn a lot of attention to Chapel Hill.

Despite the hype around Howell, App is actually outperforming UNC in total offense by 50 yards per game in the first few games of the Drinkwitz era in Boone; though, to be fair, those efforts have come against East Tennessee State and Charlotte. Quarterback Zac Thomas is also having a solid start to the year, connecting on 30-of-44 tries for 332 yards and five touchdowns. Running back Darrynton Evans is rushing at over 10 yards per clip, tallying 333 yards on 33 totes, with four touchdowns in the mix.

UNC was its most balanced on offense last week against Wake Forest, throwing for 189 yards and rushing for 144. That balance came with a defeat, however, as the Deacs tripped up the visiting Tar Heels, 24-18. Howell has also yet to be picked, finding the end zone six times on 48 completions (76 attempts). Howell stands tied with BC’s Anthony Brown in lowest attempts per game (25.3) among regular, non-Georgia Tech quarterbacks in the ACC. Running backs Javonte Williams (37 carries, 205 yards, TD) and Michael Carter (40 carries, 203 yards) have nearly split the work, and one would certainly hope to see a decent level of production from the tandem against a Mountaineer defense that has surrendered 4.89 yards per carry to opposing rushers in 2019.

One final item:  While looking at Appalachian State’s defensive numbers and making the thinking emoji, note that a lot of that offense came at the hands of a Charlotte team that has shown vast improvement early on in the Will Healy era. That improvement will certainly be tested at Clemson this weekend, but credit where due to the hard-charging 49ers.

Furman and Elon (along with Niagara, though the Purple Eagles don’t field a team) share a fight song.