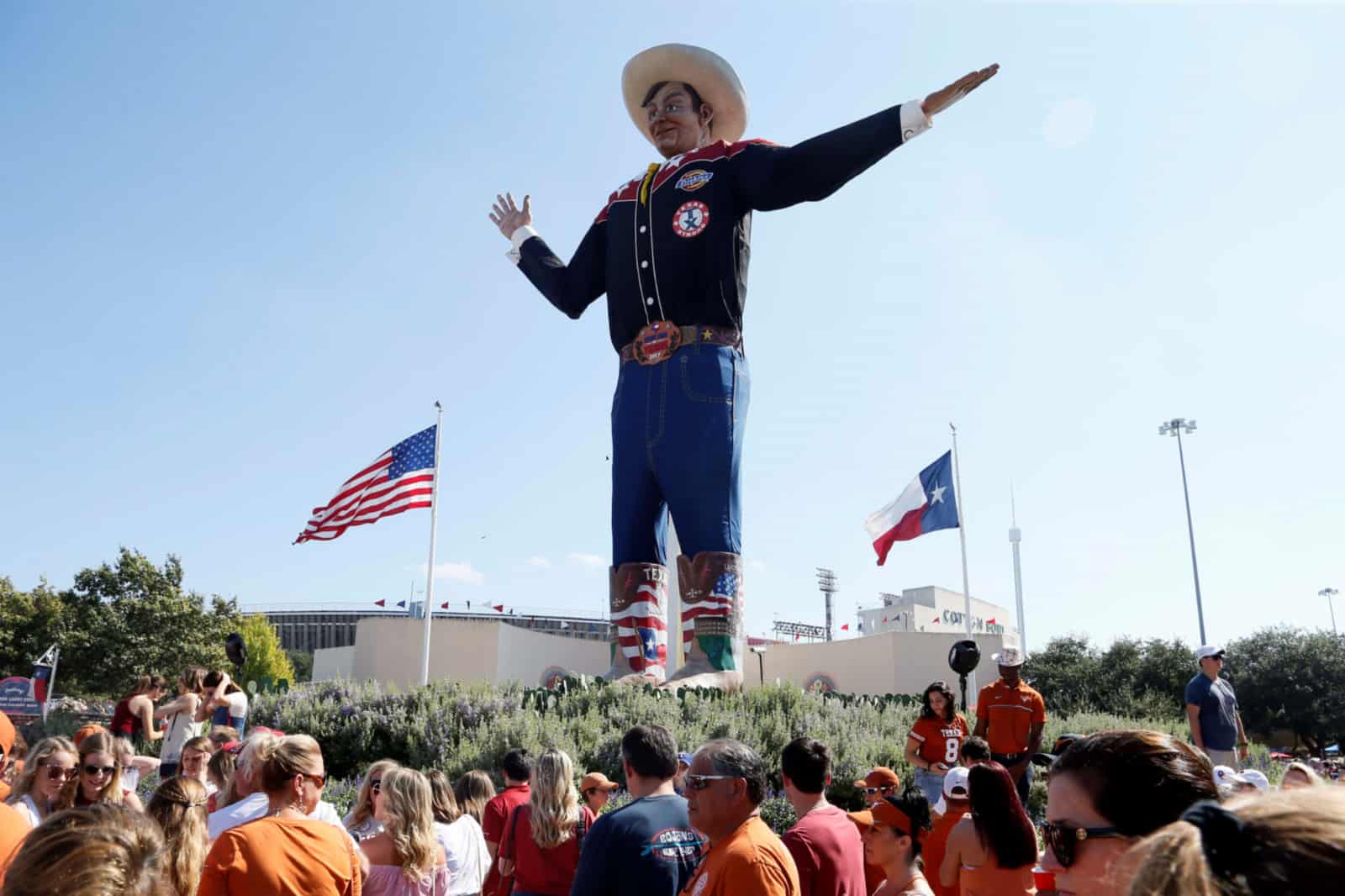 Welcome back, everyone, for another week of Clear Your Schedule! We’re already into Week 6 (and October…what in the…), so just take a breath and realize that we’re (roughly) halfway through the season. That’s really exciting or really sad, depending on your perspective.

Last week saw the return of the podcast, and I think we may have ironed out the sound concerns from that first week. Give it a listen by pressing the handy little play button just down from here.

We’ll also ask this week’s trivia question on the podcast side. If you find you’re wanting to test your trivia knowledge, give us 15 minutes.  We’ll take you through three games, including our FCS Game of the Week!

Before we move forward, let’s look at how last week’s games we featured wrapped up:

Before we move to the written games, here are the audio breakdowns of three of this week’s six games! Just press play!

Hero takes a fall:  This might not be the most innovative note we’ve ever included in this feature, but it is arguably one of the most illustrative. Texas enters this game on a four-game win streak, which would have seemed much more the norm years ago. It is, however, the first four-game win stream for the ‘Horns in six seasons. That 2013 Texas club won six in a row, and, coincidentally, Oklahoma was the only ranked team to fall as part of that streak. Texas beat Oklahoma, 36-20, in the Red River Rivalry that year (I still call it that, and so should you).This year’s Longhorn club has clipped two ranked opponents in that four-game stretch.

Something you’d expect…and something you wouldn’t:  Oklahoma’s offense is the same juggernaut fans have come to expect during Lincoln Riley’s tenure in Norman, with the Sooners having gone 27-1 over their last 28 Big 12 games. Oklahoma’s offense ranks 12th among FBS clubs, totaling just over 523 yards per contest. Quarterback Kyler Murray is fifth in total offense at 349 yards per game.

Texas’ defense is the more unexpected sight on the field in this one, however. The ‘Horns rank 30th in total defense at just over 333 yards per game, and 31st in scoring defense, surrendering just shy of 20 points per game. While there may not be a marquee player on the Longhorn defensive unit like Oklahoma’s Kenneth Murray — yet — there is a solid combination of youth and veteran production on the defensive side of the ball. Freshman defensive back Caden Sterns has three picks through five games, while cornerback Kris Boyd has eight pass breakups and nine passes defensed. Sterns and Boyd will be key to the attempt to slow down Kyler Murray through the air, and the linebackers in orange and white will have to stay home to force Murray back into the center of the field and out of the second level.

Getting defensive:  Oklahoma’s defense also deserves credit, with just seven Sooner opponents scoring first-half touchdowns on 32 drives (22 percent). If Texas can score early, it would be both huge and against trend; along with the success we’ve outlined for Oklahoma’s defense, the Longhorn offense has been — by the numbers, anyway, largely pedestrian. Texas ranks 78th in total offense, tallying fewer than 400 yards per outing. The Longhorns are 62nd in the nation in passing offense (243.4 yards per game), and 91st in rushing offense (just over 153 yards per game). Needless to say, the notion of having to embark on a huge comeback against the Sooners is less than desirable.

Print that, tweet that, whatever:  Texas’ being ranked has been met with a significant amount of skepticism. A blowout here would bounce the Longhorns back out of the national conversation.

Seeing red:  Florida’s pass defense is stellar — we’ll briefly touch on that a bit later in this piece — but the Gators’ defense is not as successful inside the 20. Florida opponents have converted on 6-of-8 tries (75 percent) in the red zone this year. LSU’s success in the red zone, however, is well-documented by the Tigers’ sports information department. LSU is 20-for-22 in the red zone this year, and is 44-for-49 inside the final fifth of the field in two years under Steve Ensminger’s offensive tutelage. 12 of those 20 LSU scores this season have been touchdowns, and the Tigers’ 4-for-6 performance against Ole Miss in the last game snapped their four-game streak of having converted on every opportunity in the red zone.

Pedestrian passers:  Both teams’ quarterbacks — though skilled — find themselves fairly low on the national passing offense rankings. LSU’s Joe Burrow throws for an average of 204.6 yards per game, which places him 64th among FBS passers. Florida’s Feleipe Franks can be found nine spots lower in the rankings, throwing for just over 192 yards per game. Burrow has thrown for a sub-45 percent completion percentage in two road games, and his 72 percent completion percentage against Ole Miss in the Gators’ last game was the first time Burrow has recorded a completion percentage higher than 57.1 percent this season. Similarly, Franks has eclipsed 53.3 percent against exactly one FBS opponent this year, lodging a 71 percent number in last week’s win against Mississippi State.

A whistle symphony of which Axl Rose would be proud:  As effective as both of these teams have been early this season, they share a common Achilles’ heel:  penalties. Florida ranks 83rd among FBS teams in number of penalties per game, while LSU ranks 85th. The Gators were whistled 11 times for 90 yards against Mississippi State last week (compared to just two for 15 from the Bulldogs), and average 7.6 penalties for 63.8 yards per game. LSU, meanwhile, collects 6.4 whistles for 64.4 yards a game. Florida has been called for double-digit penalties in their last two games (10 for 79 yards at Tennessee, to go along with last week’s effort), while LSU has tallied no greater than nine in any contest this season.

Print that, tweet that, whatever:  Dan Mullen has begun the turnaround much sooner than many expected in his return to Florida. A win here — however unlikely — would be a huge next step.

Cutting teams off at the pass:  Miami (Florida).  Florida.  UAB…(?) Yes, Virginia, those are the top three teams in the land in passing defense. Opposing teams have thrown for just 141 yards per game against the Blazers this season, with Savannah State completing fewer than six percent of its passes and Tulane just over 26 percent of its throws. While the results were a bit different against Coastal Carolina and Charlotte, no UAB opponent has gone for greater than 194 yards through the air this year. Seven of the Blazers’ last eight opponents have thrown for fewer than 200 yards, with Ohio’s 210 at the end of last year the lone exception.

Conversely, Louisiana Tech ranks 22nd among FBS teams through the air, including a 330-yard outing at LSU two games ago. The Bulldogs throw for 299 yards per game, with J’Mar Smith hitting receivers at a 58.1 percent (90-for-155) clip. Smith has thrown for nine scores, but has also thrown a slightly troublesome four interceptions. The Blazers have picked off four passes this year, so ball control will be a factor for Tech.

Pressuring passers:  If we’re being honest, neither quarterback should feel comfortable in Ruston Saturday night.  UAB is tied for 15th nationally in sacks, having recorded 15 on the year. 11 of those sacks have occurred over the last two games. On the other side of the ball, Tech’s Jaylon Ferguson is tied for third in the nation with six sacks. Four of Ferguson’s quarterback takedowns came in the midst of his club’s furious comeback from being down, 21-6, at North Texas last week. Quarterback hurries will make a difference, even if those sack totals aren’t as gaudy as those previously posted.

Bowling for…bowls:  UAB’s sports information department accurately points out that the winner of this contest controls its own destiny on the road to a Conference USA title. It would not be terribly unressonable to say that the Bulldogs have set a postseason standard to which UAB likely aspires. The Blazers made only their second bowl appearance in program history last year and their first since 2004 in falling to Ohio in the Bahamas Bowl. The Bulldogs have won six of 10 bowl appearances, including the last four in a row (2014-2017). Those appearances have come in four different bowls over those four years, and the Bulldogs have scored 35 points or greater in each contest.

Print that, tweet that, whatever:  It’s hard to believe UAB’s program is this strong after a year’s “vacation”. If they win here, they could — possibly — represent the league as its champion.

Enjoy your college football weekend, everyone! We’ll see you back here next week for Week 7 (it gets harder to type with every passing week, friends). Before you go, click the handy little Twitter follow button below, will ya? Until next week…

Notre Dame started out with 5 teams on their schedule ranked between #10 and #20 preseason. 3 teams they have beaten were ranked when ND played them. At the end of Week 6 only Michigan is ranked on their whole schedule? Does it matter?