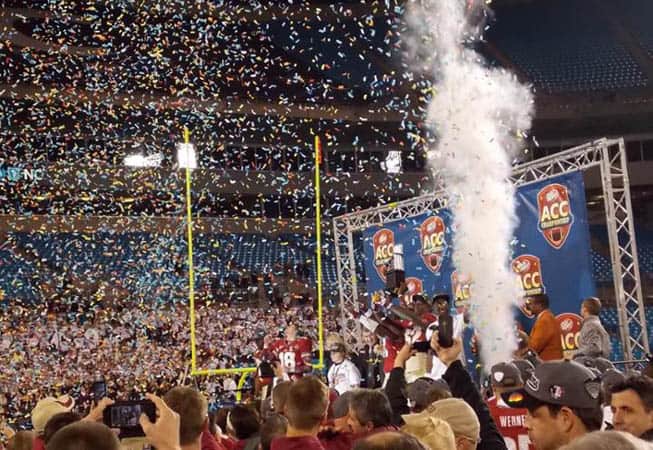 Take a journey with me to two-and-a-half months ago. It’s September 21, 2013, and the Wallace Wade Stadium clock has just hit 0:00 on a 58-55 Duke loss to Pittsburgh. The Blue Devils are 0-2 in the conference, and many pundits and fans are wondering if Duke’s resurgence during the 2012 season was just a fluke. The “real” Duke was surely back, right?

Duke hasn’t found itself on the losing side of the scoreboard since that day. Non-conference victories over Troy and Navy preceded six consecutive ACC wins — four away from Durham — and propelled the Blue Devils 140 miles southwest to Charlotte. Duke takes the field looking to win the school’s first outright conference title since 1962, though the Blue Devils did split the crown with Virginia in 1989. David Cutcliffe’s team is also the first Coastal Division club other than Georgia Tech or Virginia Tech to compete for the crown.

Florida State, for their part, is back in familiar environs. The Seminoles defeated Georgia Tech 21-15 in the 2012 edition of this game, hoisting the trophy in front of 64,778 fans in Charlotte’s Bank of America Stadium. Current Bills quarterback E.J. Manuel completed 16-of-21 passes for 134 yards in the game, while running back James Wilder, Jr. rushed for 69 yards and scored twice. Wilder also captured the game’s MVP trophy in the victory.

Though many — including almost every oddsmaker alive — see this game as an easy repeat victory for the Seminoles, we still have a game to preview. Before we do that, though, it’s trivia time!

ACC Trivia, Championship Edition (answer at the end of the column): We mentioned earlier that FSU running back James Wilder, Jr. was the MVP of the 2012 ACC Championship. Who won the MVP award in the first-ever ACC Championship?

Program guide: We talked earlier about Florida State’s offense, but there is so much more that could be said. The Seminoles set conference records this season in touchdowns (84), touchdown passes by a freshman (Winston, 35) and points (644). The touchdown and point records break records previously held by previous Seminole squads. The freshman touchdown record previously belonged to NC State’s Philip Rivers, who threw for 24 in 2000.

Florida State’s defense has — as much as possible — flown under the radar this season. FSU has allowed greater than 345 yards of total offense in a game just once this season, which was also the closest game they played all season, a 48-34 victory over Boston College. This was also the last game in which the Seminoles trailed. A Chad Abram touchdown catch tied the game at 17, and FSU has a running streak of 511 minutes and 49 seconds without trailing. Conference opponents averaged just 282.3 yards per game against FSU, and the ‘Noles lead the nation in points allowed (11 points per game).

Duke quarterback Anthony Boone has experienced his own share of success, going 9-0 as a starter this season. The Devils have gained greater than 400 yards five times during their winning streak, and Boone’s success has played a huge role in that run. Boone ranks seventh in the conference in total offense at 209.7 yards per game. Though Boone has thrown for just ten scores, his leadership has helped guide the club to Charlotte. Fellow quarterback Brandon Connette has provided a tremendous change of pace, ranking 16th among all ACC offensive players at 139.9 yards per game. Connette has completed 62 percent of his passes and thrown for 13 touchdowns, adding 13 rushing touchdowns to his total.

Much of the Blue Devils’ success has been predicated on their bend-but-don’t-break style on defense. Duke ranked in the middle of the pack in total defense this season, allowing 436.3 yards to ACC foes. While Duke has gained greater than 400 yards in five games during their win streak, they have allowed greater than 400 yards in four of those games. Duke allowed 418.3 yards per game in November, the month in which they surrendered their highest average yards total. The Blue Devils feature the league’s top three tacklers in linebacker David Helton (9.5 tackles per game), linebacker Kelby Brown (9.2) and safety Jeremy Cash (9.1). Duke will need to throw more punches than they take to leave the field in Charlotte victorious and clinch a BCS bowl berth for the first time in school history.

Trivia answer: We mentioned earlier that FSU running back James Wilder, Jr. was the MVP of the 2012 ACC Championship. Who won the MVP award in the first-ever ACC Championship?

Pretty much anything you could ever want or need to know is in this review between these two teams.While it is unlikely, a Duke win could really shake things up in the world of college football.This game should provide a lot of interest though,as there are two teams here that were not really expected to be there by most fans.

People thought Florida State was going to walk over Georgia Tech in this game last season, and look how that went.

Good point, Josh. Florida State was completely out of its rhythm all night. I was on the field for the final five minutes, and I still don’t know that anyone was confident the Seminoles would hold on until the final gun sounded. I don’t know that Duke can disrupt FSU that much, but I wouldn’t be at all surprised.