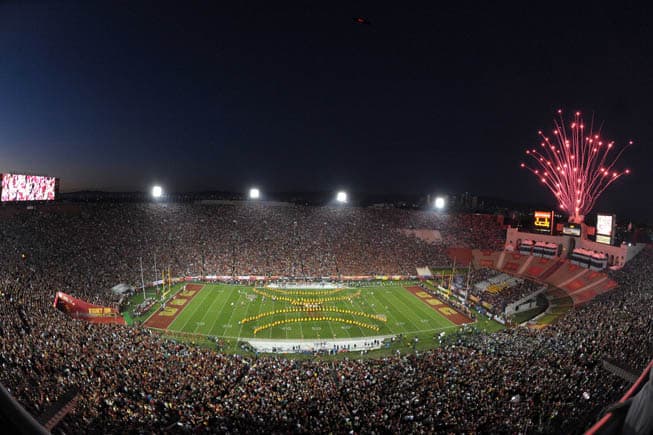 The BYU Cougars and the USC Trojans have scheduled a three-game football series for 2019, 2021, and 2023, BYU announced today at their Media Days.

In the first game of the series, BYU will host USC at LaVell Edwards Stadium in Provo on Sept. 14, 2019.

The second and third games of the series will both be played at Los Angeles Memorial Coliseum on Thanksgiving weekend in 2021 (Nov. 27) and 2023 (Nov. 25).

“We have a huge number of Cougar football fans in Southern California who will love having a chance to see their team play twice against one of the best programs in all of college football,” said BYU director of athletics Tom Holmoe. “Cougar Nation will also be excited to have USC come to Provo.”

BYU now has five games scheduled in 2019 and two in both 2021 and 2023. In 2019, the Cougars also host Nevada and Boise State and travel to Virginia and Washington State.

The Trojans now have two games slated in 2019 and 2023 and three in 2021. USC also plays Notre Dame each season and is supposed to play Tennessee in 2021 at a site to be announced.

This announcement is going to leave a lot of people in the state of Utah wondering why BYU and USC can play in November, but Utah and BYU cannot.

USC is a much more attractive an opponent than Utah. As a Husky fan, when Utah and Colorado entered the PAC12 it ended our annual rivalry with USC and gave us games with Utah and Colorado. We were the losers in that deal.

USC is certainly a far better opponent than Utah, however the Utah-BYU rivalry is a big deal to those involved. From my standpoint this scheduling agreement is a slap in the face to the University of Utah.

Maybe that will wake Utah up out of its druken pac10.2 stupor. They claim not to want to play BYU to limit the tough non conference games then they schedule Michigan. Utah wanted to show BYU that they are better than BYU now that they are in the Pac10.2. The reality is they are going to miss a bowl game for a second year and become less relevant. It is a slap that should wake Utah up, but sadly it wont. They will continue to claim greatness through losing seasons and association.

No one loves 2 for 1 deals but I like it. Only TH knows how difficult it is scheduling late November but it looks tough. And the only road games USC has scheduled, 2 for 1 or otherwise, beyond 2013 are Texas, Notre Dame, Tennessee and BYU. Good company.

A slap in the face to the University of Utah? I’m confident that BYU had offered these dates to Utah previously.

The slap at least from what we know of, is that USC can schedule ooc games after September and Utah cant. More likely it is that Utah has not pursued it, but without them saying otherwise the assumption is that they cant based on their own assertions in the past.

I doubt BYU offered Utah a 2 for 1 in Utah’s favor.

The Pac-12 commissioner Larry Scott likely offered a post-September waiver at the insistence of USC AD Pat Hayden, something he is very reluctant to do with Chris Hill at Utah working with Tom Holmoe. Rumors abound however that post 2016 the 2nd weekend in October might be in play for a BYU vs. Utah matchup. What will be interesting however will be any future series with Utah State since I think Holmoe is reluctant to agree to ANY future dates in Logan all the same as Chris Hill. A rotating payday game bus trip for the Aggies to SLC in even/odd years & Provo is a real possibility on that one particularly if BYU gets a league deal they can’t say no to. BYU is not as commited to long term independence as some would be lead to believe.

I know it’s a 2-1 but as a BYU fan, ending the year in sunny LA against USC? I’ll take a 2-1. November schedules have been a big gripe with many fans. This solves it for two years. We need more teams like USC as the last game of the year.

Yes, I’m all for warm weather November games. I do wish that USC wasn’t so snobby and would home and home it.

USC wasn’t all that snobby. They do play in Provo in 2019, but the snobby part is when they wanted 2021 and 2023. Besides, those days could easy be thrown out because those dates are so far down the road……….

BYU is the team from Utah that we should’ve invited to join the Pac. Here in California I know tons of BYU fans, but I’ve never met even one University of Utah fan in the state.

Talk to Cal and Stanford. They said HELL NO if BYU won’t play on Sunday.

From the USC Press Release:
___
“Not only are we pleased to be able to extend our storied series with Notre Dame, but we were able to keep the game on the traditional dates of Thanksgiving weekend in Los Angeles and mid-October in South Bend,” said USC athletic director Pat Haden. “Adding the series with BYU, which is a great matchup for the fans of both teams and for all college football fans, helped us in that regard.
___

Does this mean that USC needed to schedule BYU in the 2020s, helping offset Stanford, in order to get its own late season ND games? So will there be Stanford-BYU games to enable Stanford to have ND games by offsetting USC?

Or am I reading Haden’s comments wrong?

Tom Holmoe, the BYU AD in a interview with a local radio show indicated that he has had recent success with scheduling with PAC-12 schools to help offset unanticipated scheduling issues. He also said he would likely announce some more series with PAC-12 schools in the next month. So you could be reading into that correctly, based on what Holmoe said.

I do not like 2 for 1 deals. But I do like playing the top programs in the country (actual or branded). If bringing Texas and USC to Provo once requires a trip to their Stadium twice then I take it. Especially when we play them in November.BYU has added November games with Notre Dame USC and Wisconsin helping to bolster their late season interest.

Utah is unlikely to ask for a scheduling exception to play BYU later than September. Utah has shown that the game is not a top priority for them and as such why would they try and play it at the end of the year.

I predict that the scheduling restrictions will be changed on the Pac 12. If the trend for AQ programs to increase SOS continues then the Pac 12 might not have much choice. WIth sanctions pending for Oregon the Pac 12 is less likely to have teams in the new Playoff. After missing the playoffs once or twice they will need to rethink their strategy.

On another note to help offset all of these 2 for 1 deals BYU needs to start getting more 2 for 1 deals on their end. They do get one FCS team each year and that offsets one game. The problem for them is they cant pay Sun Belt teams as much as the SEC can especially factoring in the additional travel costs. Same thing goes with the MAC BYU cant pay them Big 10 money and would need them to travel longer distances. So I am interested to see how they address this issue.

BYU is getting 2 for 1’s in their favor via the MWC, see Nevada and Utah State

My prediction is 2013 will be the last time BYU palys Utah State on Logan. Utah State is the poorest of the MWC “Lil’ Sisters of the Poor”

My point was when you add up the 2 for 1’s BYU is giving and receiving it is lopsided. BYU has future games with schools with no return or a lopsided returns.

By my count that is 8 games without a return game. BYU does have a 2 for 1 with USU over the next 3 years. And the Nevada series mentioned by G to F is essentially a 2 for 1 when you count the 2010 game.

I’m with you on this, jst5. Unless teams are willing to give us at least 2 games in November, I don’t think we should schedule anymore 2-for-1s. In fact, we shouldn’t have scheduled so many to begin with, and we certainly should never schedule 0-for-1s like we have with West Virginia, Michigan, and Nebraska.

Bronco warned that BYU would be road warriors for a while. The good news–we get to play with the Big Boys, and in many cases, in November, and in USC’s case, on Thanksgiving Weekend! As much as I love our program, we are going to have to prove ourselves in order to build up our brand (reputation) more, and that will require some sacrifices on BYU’s part. USC and others are not being snobby, they’re acting in their own self-interest. And, of course, BYU can always say no. But the fact is that we want to play on the road around the country where our fans can watch live games against famous teams.

Byu does need more 2-1 in their favor. If I were them I would keep a 2 for 1 with USU and go after recurring 2 for 1s with Idaho and NM State. Both will be in the Sun Belt and I’m sure would appreciate some games in the west. Also new new and upcoming FBS teams might bite. Plus some of them play in (or near) fairly large venues (Umass, South Alabama, UTSA, Georgia State, UNC-Charlotte) that the home team (and BYU) would love to fill with BYU fans.

@JST-
You have to understand, they don’t look at it like that. With over 300k Alumni in Arizona they feel like they just got a 2 for one with AZ. They concede AZ will get more fans in Tucson, but they anticipate having more fans in Phoenix and in Provo. So it isn’t two games in Provo, but they accomplished the same thing, a three game series where they have the fan majority twice.

For BYU it’s not about the location, it’s about Alumni and the crowds. If you have a 3 game series and you felt you would have the crowd advantge in 2 of the 3 games -you would book that series. It’s not about where the game is played it’s about how many fans you can bring!

Bryan Fischer did some digging on this one. He got the explanation that USC asked the Pac 12 for a waiver for these games in 2021 and 2023 to avoid 12 games in 12 weeks before a bye.

If they knew they had a bye, then it seems Stanford and USC have been told the other 10 teams will be paired up in the final week. So Stanford would be wise to find BYU or Army as opponents in even numbered years. And quick – with Navy joining a conference, they will likely have a conference game that weekend (before AAC Title game followed by Army game) so there is no need for Army to match Navy in quantity of consecutive bye weeks any longer. As such, BYU-Army seems like a fit for Thanksgiving weekends.