BYU and Tennessee schedule football series for 2019 and 2023 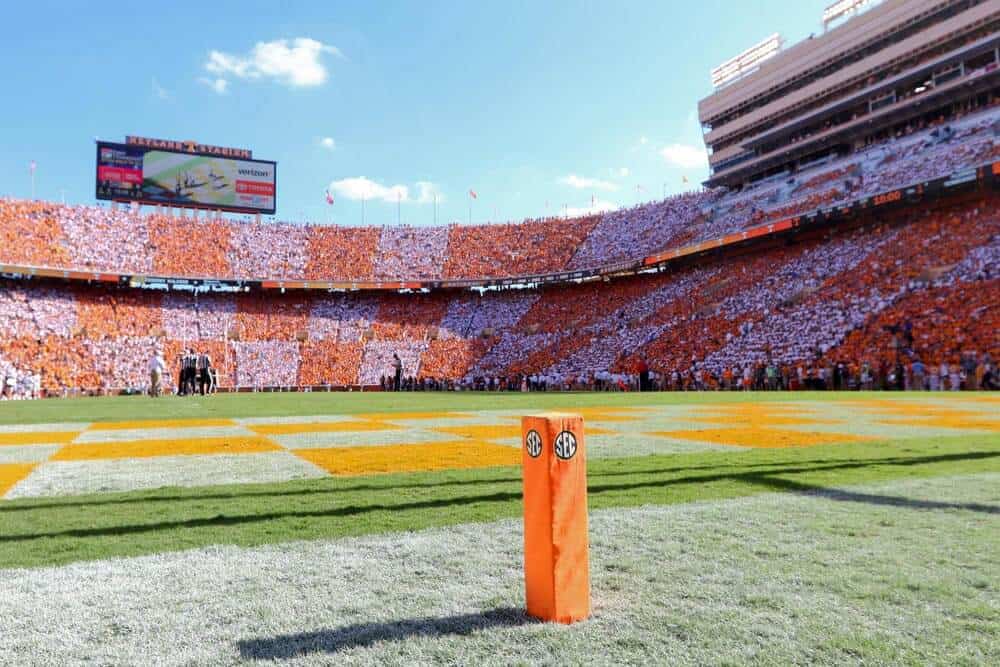 The BYU Cougars and the Tennessee Volunteers have scheduled a home-and-home football series for 2019 and 2023, both schools announced on Thursday.

In the first game of the series, BYU will travel to face Tennessee at Neyland Stadium in Knoxville on Sept. 7, 2019. The Cougars will then host the Volunteers at LaVell Edwards Stadium in Provo on either Friday, Sept. 1 or Saturday, Sept. 2, 2023.

The 2019 contest will be the first-ever meeting between the two schools on the gridiron.

“There’s something about those orange and white checkerboard end zones that shouts ‘Tradition!’,” BYU director of athletics Tom Holmoe said. “When the opportunity to play a series with Tennessee presented itself, we didn’t blink. They’re a storied football program with a winning tradition, national championships, a classic stadium, incredible fans and hall of fame coaches. It will be a great experience to visit SEC country and play in Neyland Stadium, and later host Tennessee in Provo.”

Today, BYU also announced that they will host the Idaho State Bengals in Provo on Nov. 16, 2019. The two schools have met five times on the gridiron and BYU currently leads the series 5-0.

“I like this regional game with Idaho State,” said Holmoe. “Pocatello is only about three hours from Provo and it’s a good regional contest for both schools. We look forward to hosting Idaho State at LaVell Edwards Stadium in 2019.”

In SEC play in 2019, Tennessee is scheduled to host Georgia, South Carolina, Vanderbilt, and Mississippi State and travel to Florida, Kentucky, Missouri, and Alabama.

Great news. Any word on a new date for the Stanford at BYU game that had been scheduled for 9-2-2023?

No, probably won’t see anything until Stanford announces a new game/series and lists their future dates.

Thanks Kevin. It looks like this will still fall within 2023, BYU has been keeping this current at all times and it lists both Tennessee and Stanford within 2023:

Great, thanks. Too bad they don’t list exact dates!

“The Cougars will then host the Volunteers at LaVell Edwards Stadium in Provo on either Friday, Sept. 1 or Saturday, Sept. 2, 2023.”

ESPN pushed for this stipulation in the contract. Plan on this being the big Friday night game, that ESPN uses to kick off the 2023 Season.

This is a good move by BYU, the fact is, they are a better club than many Power 5 Conference teams. By a stepping up to play Tennessee and other P5’s opponents, they are giving themselves an opportunity to play their way into a New Year’s Day Bowl Game. Their tilts with the PAC 12 (winning of course) also our helpful to this end. I believe they need to play a schedule similar to ND’s, at least 9 P5’s, to have an argument. The AAC, MWC, & MAC Champs, have the edge over the Cougars to be the highest ranked G5, which gets a January one game. As an Independent, I think BYU has to play, at least, 9 P5’s to have a shot!

9 P5s would be very difficult. If USU is played on the regular weekend, 9 P5s would have to fit in the other 12-13 weeks with Boise State and an FCS opponent filling in the gaps.

October and November games are the real constraint.