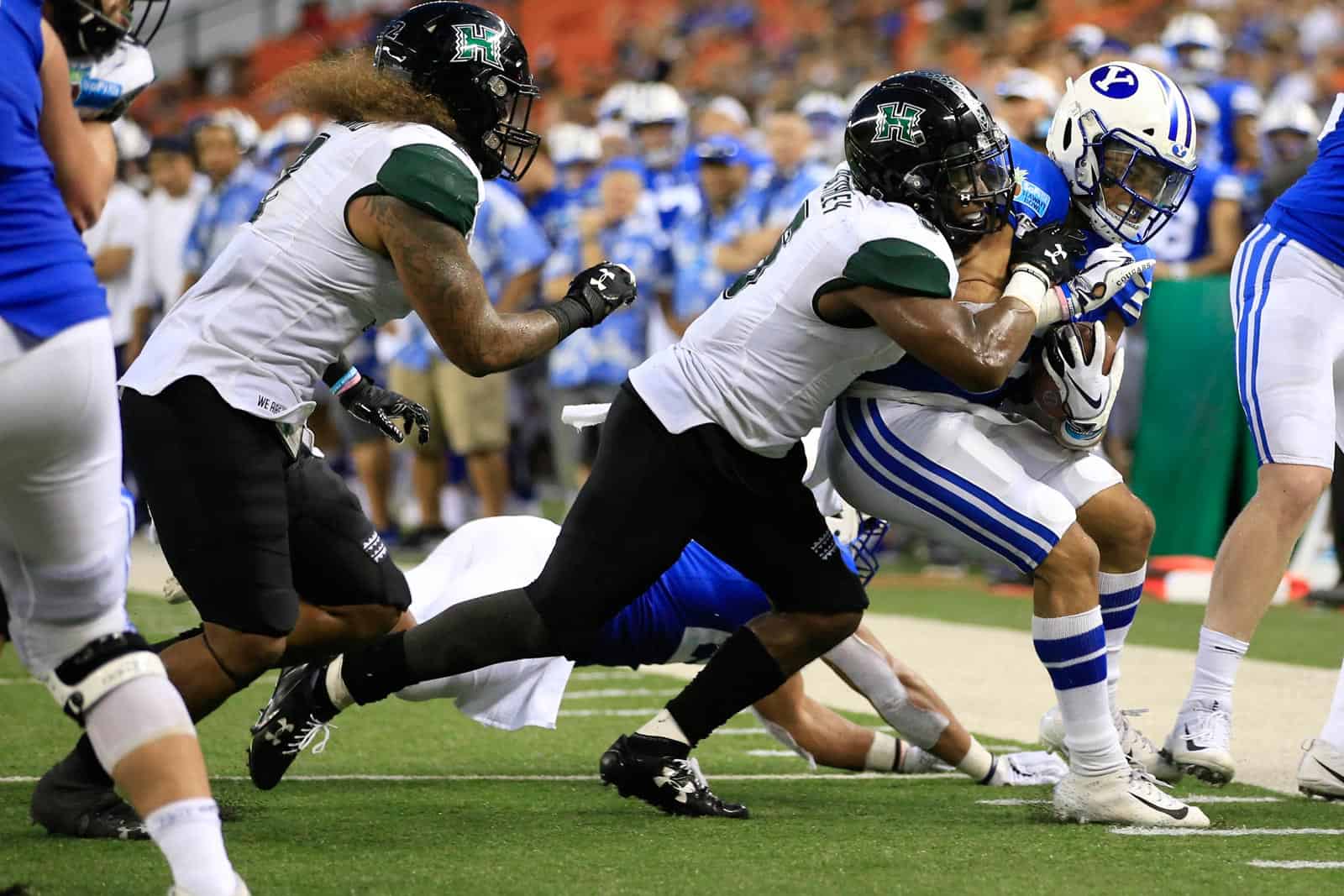 The BYU Cougars and the Hawaii Rainbow Warriors appear to have canceled their home-and-home football series that was scheduled for the 2024 and 2025 seasons.

BYU and Hawaii were scheduled to begin their home-and-home series on Sept. 14, 2024 at LaVell Edwards Stadium in Provo, Utah with the second and final game slated for Sept. 6, 2025 in Honolulu, Hawaii. Both games were previously listed on Hawaii’s official athletics website, but have since been removed.

Below are screenshots of Hawaii’s 2024 and 2025 schedules from their official website along with the archived version of each page via the Internet Archive Wayback Machine: 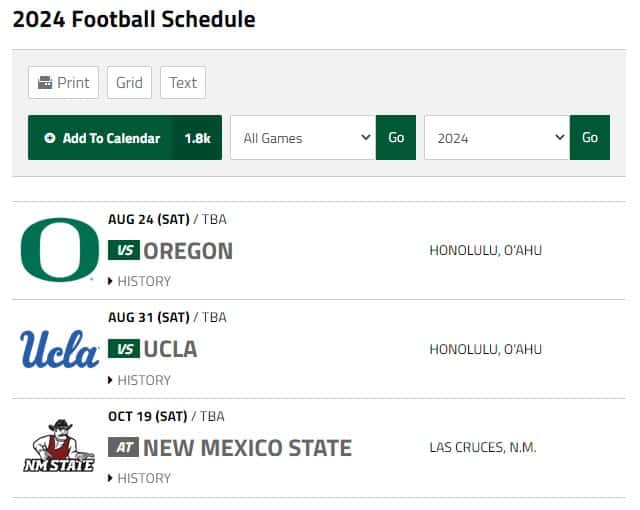 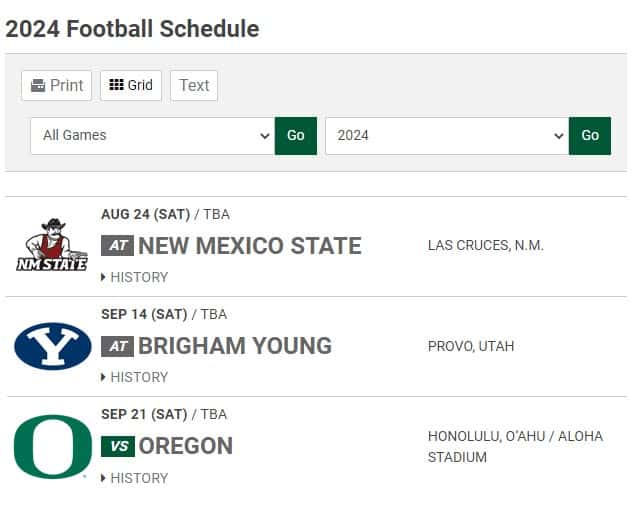 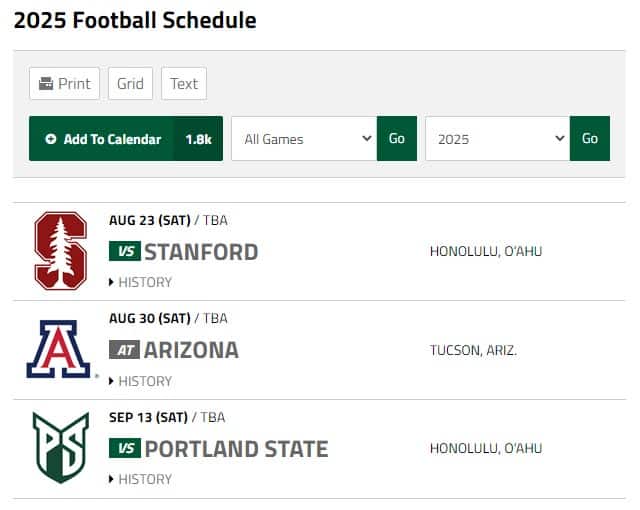 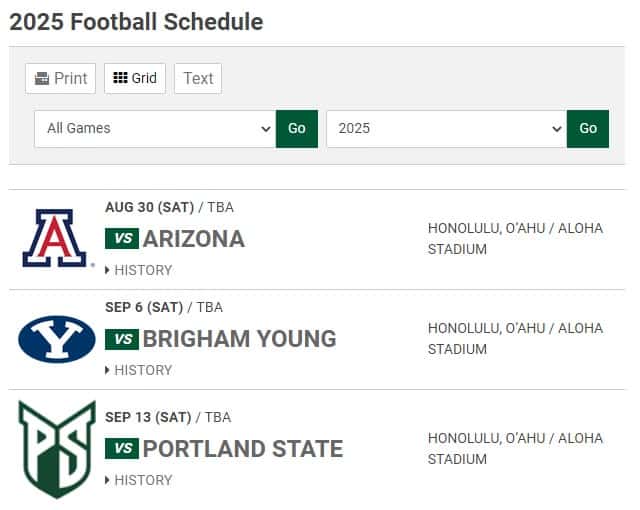 FBSchedules reached out to both schools last week for comment, but neither school has issued a response.

The BYU-Hawaii contract did contain a stipulation that if either team joined a new conference and provided 18 months notice to the other school, it would “…not constitute a cancellation, forfeiture, or non-appearance.”

With Hawaii presumably off of BYU’s 2024 football schedule, the Cougars are down to seven games that season, at least publicly. BYU’s 2025 schedule has now been trimmed down to three games, which is the exact number of non-conference games they will need in the Big 12 if the league continues to play a nine-game schedule.

Additionally, per Wyoming’s official website, their contest with BYU in Laramie in 2024 has been moved up two weeks from Sept. 28 to Sept. 14, which was previously the date of the BYU-Hawaii game. That move likely came at the request of the Big 12.

Last week, we also reported that BYU has likely canceled their game in 2024 against Georgia Southern.

Couldn’t they have just canceled the game at BYU?

Yes.
In 2025 The Big12 has a new Media Rights Contract. Noone in the current Conference of 10 Teams or the 2025 Conference of 12 Teams knows what the scheduling Model will be so far ahead.

The NCAA pending possible bylaw change, which would start in the 2023 Season, to eliminate the Divisions Requirements for all Conferences could change every Conference’s way of scheduling.

The waiting Game affects MW Football’s 2024 Scheduling just as much til they know whether Divisions are scrapped or still “a Thing”.

I think Brendan Burke’s point was that BYU could have used the Hawaii exemption to preserve the game scheduled there. Presumably BYU is reformatting its schedule to make room for Big 12 games, but dropping the game at Hawaii doesn’t free up any capacity if BYU had intended to use it as a 13th game.

BYU probably won’t want to play 13 games since they’ll be in the Big 12 with the possibility of a championship game.

Agreed, I was thinking that as well. Some years it is good to have that extra game, sometimes maybe not so much. All depends on the schedule that year