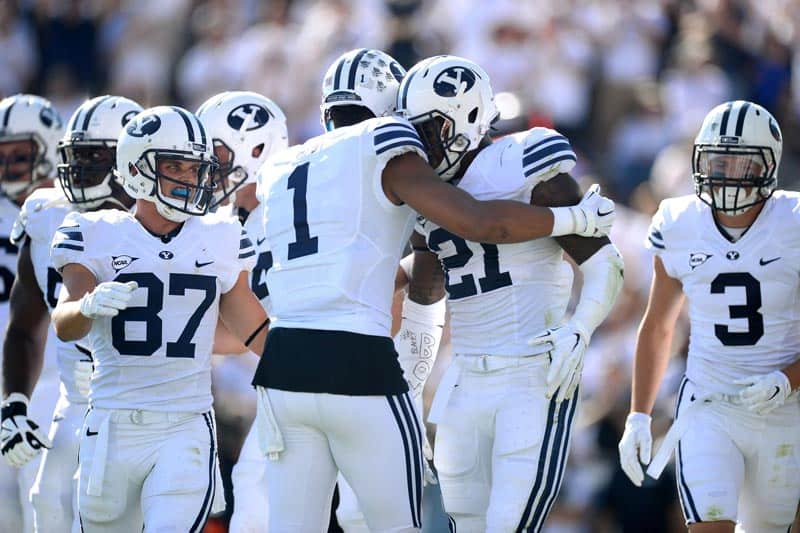 The BYU Cougars have scheduled future home-and-home football series with the Houston Cougars, Georgia Southern Eagles, and the Hawaii Rainbow Warriors, the school announced on Thursday.

BYU will host Houston at LaVell Edwards Stadium in Provo on Oct. 17, 2020. The Cougars will then travel to take on the Cougars of UH at TDECU Stadium on Oct. 7, 2023.

BYU will travel to face Georgia Southern at Paulson Stadium in Statesboro on Nov. 20, 2021. The Cougars will then host the Eagles three seasons later at LaVell Edwards Stadium in Provo on Oct. 12, 2024.

The 2021 matchup between BYU and Georgia Southern will be their first-ever on the gridiron.

BYU has also added another home-and-home series against the Hawaii Rainbow Warriors. The Cougars defeated Hawaii 30-20 this season in Honolulu and the two are scheduled to meet in 2018 in Provo.

The latest home-and-home series between the two schools is scheduled for Provo on Sept. 14, 2024 and Aloha Stadium in Honolulu on Sept. 6, 2025.

BYU leads the overall series with Hawaii 22-8 and the Cougars have won four straight and 10 of the last 11 meetings.

BYU fans going to Ga. Southern may be in for a culture shock…

BYU is lucky that they’re able to continue to get 12 games as an independent. It’s going to be interesting watching how long NMSU, Liberty, and UMass, and even Army can pull off full schedules when it looks like the P5 have to focus on getting more OOC P5 games…

BYU and Army are probably OK as long as some conferences consider them P5.

I hope we still get Missouri at BYU late season 2020 or real soon.

Also, a road spot in 2019 is all BYU has left to fill for a while non-FCS. WSU was pushed out and BYU has a bunch midsession open weeks in 2019. Some neutral site game in a remote site?

BYU thought they were going to be a major player as an independent and now they’re doing home and home with Georgia Southern. Love it.

I guess you missed the Tennessee and Va Tech H and H announcements.

Shep, your mother is still in here with us.

That’s not too bad.

Shep, your mother’s still in here with us.

Good get for BYU…the most successful D1-AA program of all time. These will be close matchups. Georgia Southern is down right now but they just got rid of their awful coach so the ship will be righted.

Well luckily for BYU the SEC and I think (not 100%) the ACC uses them as a non-conference P5 school. I think a couple of other conferences do too. But unlike with Notre Dame not all the P5 conferences include them as one.

This was meant to be a reply to David…lol oops

Any thoughts on who the final 2019 away, 2021 home FBS opponent is for BYU? Someone good enough to move Washington State out of 2019 and WSU had been the only P5 opponent beyond September.