Breaking down Week 7 of the 2017 college football schedule 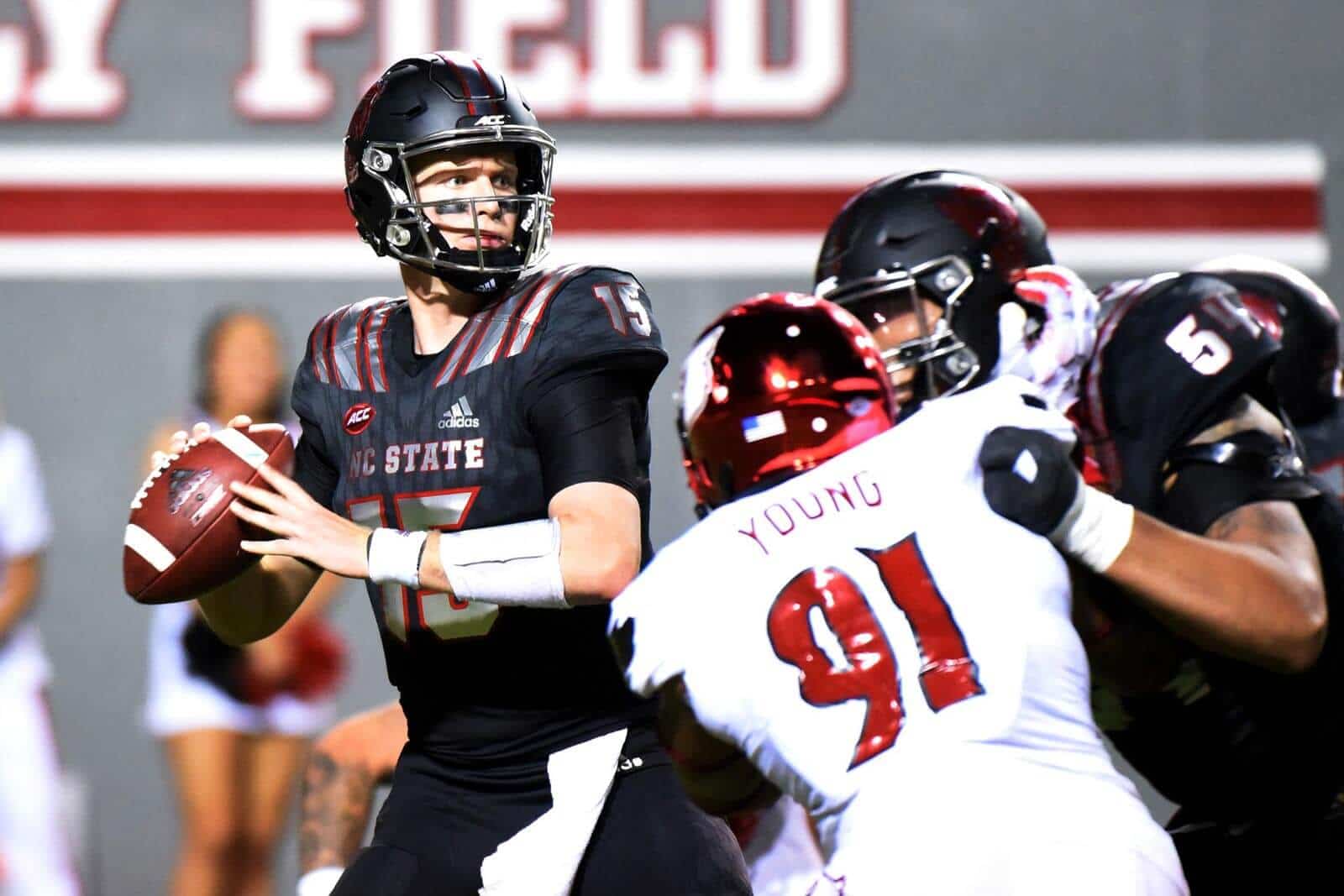 So, while there aren’t any blockbuster games (at least on the surface), everything we see will be pure, unaltered FBS vs. FBS action.

Despite the lack of top-tier matchups, Week 7 is oozing with potential. Included are a handful of games where a highly ranked team will try and survive vs. an opponent that is either on the cusp of being ranked, or stacked with enough athletic talent to engineer an upset. On Saturday, check out (6) TCU at K-State (12pm EST on FS1), (10) Auburn at LSU (3:30pm EST on CBS), (9) Ohio State at Nebraska (7:30pm EST on FS1), and Utah at (13) USC (8pm EST on ABC).

NC State is off to its best start since 2010, also the last time it beat two ranked teams in a single season. Leading the way on defense is senior defensive end Bradley Chubb (#9) with 13 tackles for a loss and 6.5 sacks in six games. The TFLs earn him the No. 2 spot in the country and the sacks tie him for No. 3. NFLDraftScout.com projects he’ll be picked in the first round of the 2018 NFL Draft. Week 7’s road trip to Pitt sets up well for Chubb to pad his resume – the Panthers rank No. 87 in tackles for a loss allowed and No. 119 in sacks allowed. Pitt’s 18 sacks are the most given up in the ACC.

Only Oklahoma’s Baker Mayfield has a higher passer rating than UCF’s sophomore quarterback McKenzie Milton (#10). The pair are the only QBs with a rating higher than 200. Milton also ranks No. 2 nationally in yards per attempt (11.5) and No. 13 in completion percentage (68.3%). Like NC State’s Chubb, Week 7 presents a scenario for Milton to ante up, in his case vs. East Carolina’s No. 129 ranked pass defense. Allowing an average of 321.7 yards through the air, only UConn has given up more passing yards per game than the Pirates this season. ECU coughed up 400-plus twice thus far – in a loss to West Virginia and a win over, ironically, UConn.

This matchup has it all, twice – one of the worst rush defenses in the country taking on a prolific ground attack and one of the top passing offenses facing a questionable secondary. In layer number one, tune in to see Arizona’s No. 4 ranked rushing offense do it’s thing vs. UCLA’s No. 129 ranked rushing D. Only Tulsa has given up more yards per game on the ground than the Bruins. On the flip side, it’s UCLA’s No. 1 ranked passing offense operating vs. the Wildcats’ No. 106 ranked pass D. The Bruins are the only team in the FBS averaging over 400 air yards per game – that’s more than (14) Oklahoma State, (8) Washington State and (24) Texas Tech. Keep an eye on Arizona sophomore quarterback Khalil Tate (#14), a backup who racked up an FBS record 327 ground yards and four rushing TDs in last week’s win at Colorado. If he plays (he’s been named the “co-starter”), he may explode. On the other side of the ball, check out Bruins’ senior wide receiver Darren Andrews (#7), with seven TD grabs he’s tied for the second most in college football.

Hold on to your stats friends, this one could be a yard-a-palooza

Even though this game doesn’t start until one-minute-before tomorrow, don’t sleep on Hawaii senior running back Diocemy Saint Juste (#22). Averaging 148.67 yards per game, he’s quietly the No. 5 ranked rusher in the FBS. He’s already scored two 200-yard games in 2017 – posting 202 in a win over FCS Western Carolina and then blasting for 241 in last week’s loss at Nevada. Cue up San Jose State’s No. 128 ranked rushing D and Saint Juste and Warrior fans should be licking their chops. No team has allowed more rushing TDs this season than SJSU’s 23.

Established in 2015, The Belt is just that, a championship belt complete with football bling. It may be the best swag in all of college football. The two schools are located a mere 175 miles apart in southern Alabama. Each school has worn the Belt once.

An actual firearm, Bridger’s Rifle (a .50-caliber Rocky Mountain Hawken rifle) honors Jim Bridger, the “foremost mountain man in the history of the American West.” One of the first Americans to visit the territory that became Yellow Stone National Park, Bridger also is credited with discovering the Great Salt Lake. “Bridger’s Battle” started in 2013, the winner of the rivalry’s name inscribed on the maple stock of the rifle. Last year was the first time in history that Wyoming captured the gun.

Awarded to the annual winner of the Red River Showdown (also known as the “Red River Rivalry/Classic/Shootout”), the Golden Hat dates back to 1941 when the Texas State Fair presented it to the rivalry.  Originally called the “Bronze Hat,” it was upgraded to the gold standard in 1969.  According to Lost Letterman, it’s also never been stolen, lost, broken or vandalized. The Longhorns have worn the hat 39 times vs. the Sooners’ 34. The game ended in a tie in 1995, 1984 and 1976.

The (10) Auburn Tigers and LSU Tigers square off for the 52nd time in history this Saturday, they’ve played consecutively since 1992. Combined, they are one of 20 sets of FBS schools who share nicknames that match exactly.

In total, there are only five games on the 2017 schedule that pit same-named FBS teams against each other. All involve Bulldogs (4) or Tigers (5), two of the three most used nicknames in the FBS. Left out are the Wildcat schools (Arizona, Kansas State, Kentucky, and Northwestern), none of which play each other this season.

Fresno State is the only Bulldog school not playing a fellow Bulldog in 2017. It’s 9-4 all-time vs. Louisiana Tech, most recently meeting in 2011. It has never played Georgia or Mississippi State.

That leaves Memphis as the only member of the Tiger contingency without a Tiger game. It’s last such game was the 2015 Birmingham Bowl, a loss to Auburn. It hasn’t played Mizzou since 1999 and has never faced Clemson or LSU.

Mississippi State is the only FBS school with two same-name games in 2017. Georgia technically played two in total, but it’s second was vs. the Samford Bulldogs from the Southern Conference in the FCS.

That leaves Auburn as the only FBS program with three same-name matchups this season.

It will be 30 rushing TDs after Saturday.