Breaking down Week 6 of the 2020 college football schedule 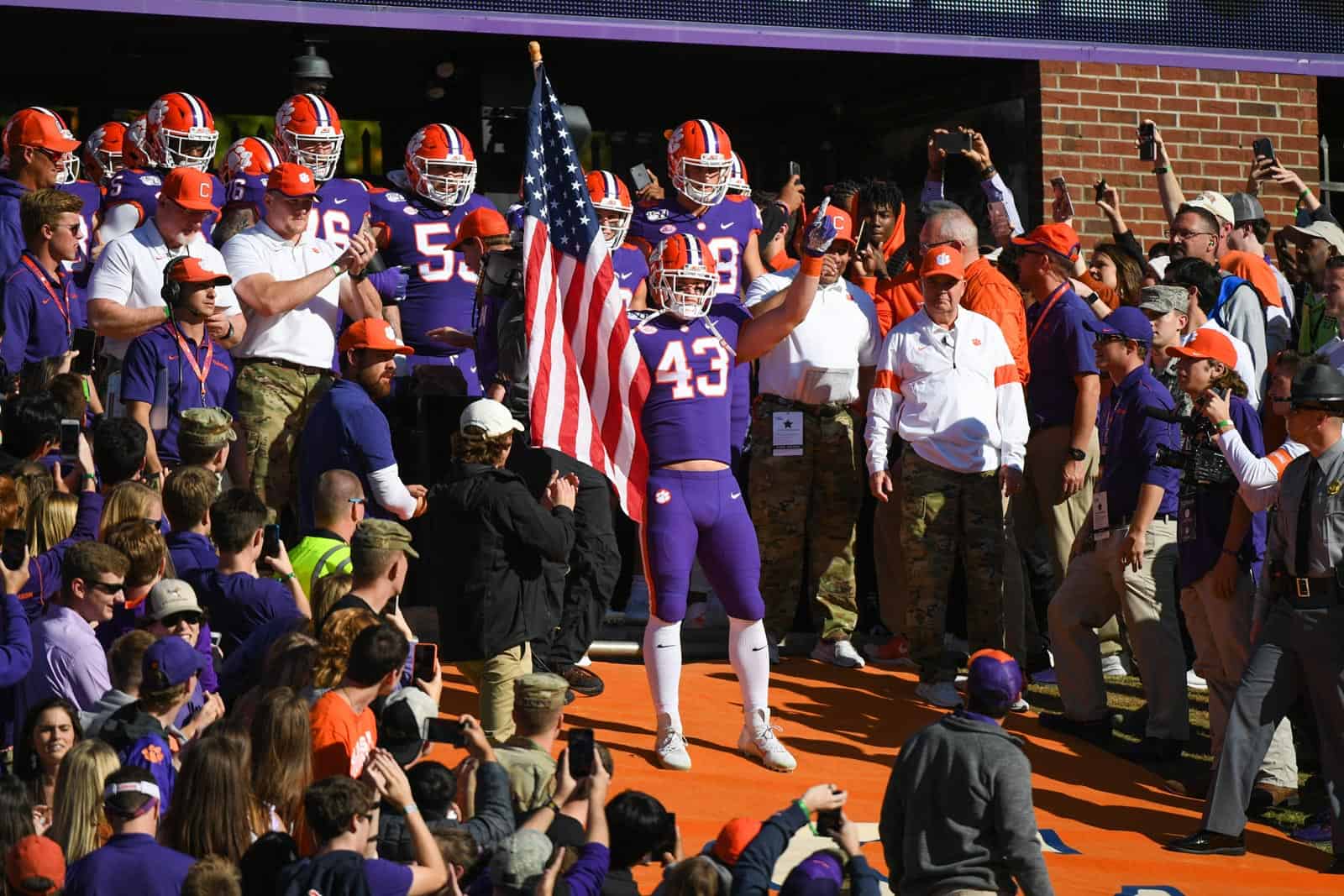 With a full two weeks remaining before the Big Ten and Mountain West enter the fray and a distant four weeks before the Pac-12 joins the party, Week 6 is all about the ACC, AAC, Big 12, C-USA, SEC and Sun Belt (along with a handful of independents) continuing to boldly bring us the action.

On offer are 29 contests including a season-high four ranked vs. ranked matchups. Twenty-five (or 86%) are in-conference games and eleven (or 35%) weren’t originally scheduled to be played in 2020.

The week kicks off on Thursday night with Tulane at Houston at 7:30pm EST on ESPN. For the Cougars, it’s finally the first game of the season and for the Green Wave it’s an opportunity to show off its rushing offense, which after three outings is ranked No. 4 in the nation in yards per game.

Saturday is literally jampacked with goodness. Tune in at Noon EST for a pair of doozies – (4) Florida at (21) Texas A&M on ESPN and (19) Virginia Tech at (8) North Carolina on ABC. Though it’s not a ranked vs. ranked affair (for the first time since 2017), don’t forget about (22) Texas and Oklahoma slugging it out in the Red River Rivalry during the same time slot on FOX. If you’re hankering for something off the main menu, flip over to Liberty (owner and operator of the No. 6 rushing attack in the FBS) as it hosts ULM (only two teams in the nation have allowed more rushing yards than the Warhawks have in 2020) – it’s on ESPN2.

The best bet in the midafternoon is an improved (14) Tennessee offense (the Vols averaged 24.2 points per game in 2019 and are up to 33 this year) at (3) Georgia (the Bulldogs’ defense is allowing a paltry eight points per game, the fourth fewest in the FBS) – it airs on CBS at 3:30pm EST. Alternates include Texas Tech at (24) Iowa State at the same time slot on ABC and 30-minutes later, Arkansas (fresh off snapping its 20-game SEC losing streak) at (13) Auburn on the ESPN.

Tune in to this one to see Florida’s passing attack – which is currently ranked No. 7 in the FBS in yards per game and is tied for No. 3 in TD passes – take on an Aggie D that coughed up 435 air yards and four TDs in a 52-24 beatdown vs. Alabama last weekend. A&M’s defensive backs were highly touted coming into the season, ranked at No. 6 in the FBS as a unit by Phil Steele. This game will be a solid indicator of whether the performance vs. the Tide was an isolated anomaly or, instead, a warning signal of struggles ahead in the now pass-happy SEC. Keep an eye on a pair of Kyle’s for Florida – senior QB Kyle Trask (#11), currently tied for No. 4 nationally in yards per game and No. 6 in passer rating and junior TE Kyle Pitts (#84), who leads the nation in receiving TDs (6).

This one features a dazzling strength vs. strength matchup pitting Virginia Tech’s No. 3-ranked ground attack against North Carolina’s No. 1-ranked rush D. Folks, those are national rankings earned 100 percent against ACC opponents. In one corner it’s the Hokies, the only non-service academy to hang up 300-plus ground yards on each of its foes this season, and in the other it’s the Tar Heels, which has given up a combined 108 rushing yards through two games this season. Which of these units is really for real? Players to watch include Virginia Tech senior RB Khalil Herbert (#21) – he leads the nation in rushing yards per game (155.5) and is No. 2 in yards per carry (12.44) – and UNC senior LB Chazz Surratt (#21), who leads his team in tackles (17) and sacks (3).

At 3-0, BYU is off to its best start since 2014 when it reeled off four straight wins and rose to No. 18 in the AP only to drop the next four games and ultimately finish 8-5 and out of the polls. The Cougars are currently ranked an impressive No. 2 – in the FBS – in scoring offense, No. 14 in rushing yards per game and No. 6 in passing, averaging just 11 yards per game fewer than Alabama at No. 5. It sets up ever so well vs. UTSA, which is currently ranked at No. 62 in passing D out of the 74 FBS teams currently in action. The Roadrunners are 3-1, but coughed up 349 passing yards and four passing TDs in the 51-48 win at Texas State and allowed 372 air yards and three TDs in the 37-35 victory vs. Middle Tennessee. Check out BYU junior QB Zach Wilson (#1), ranked No. 2 in the FBS in passer rating (221.85) and junior WR Gunner Romney (#18), No. 4 in receiving yards per game (124.3) and a “distant” relative of Utah Senator Mitt Romney.

Though Alabama is favored in this one by a whopping 24 points, it’s a matchup that has the potential to be, at the very least, highly entertaining. Both squads are pass-centric teams (the Tide are currently at No. 5 nationally in passing yards per game and the Rebels at No. 4) and both have struggled to stop the pass thus far this season (Alabama is No. 59 out of the 72 active FBS teams in pass D while Ole Miss is No. 55). It amounts to the No. 2 and No. 3 passing attacks in the SEC – through two games – squaring off with the No. 11 and No. 12 passing defenses. Logic points to a clear advantage for the Tide – not only are they deeper across the board but they return five starters to a D that was ranked No. 3 in the SEC vs. the pass last season. Compare that to the Rebels’ five returners to a unit that finished dead last in the SEC in stopping the pass in 2019. Both teams have top-ranked throwers and catchers – for Ole Miss it’s sophomore QB Matt Corral (#2) – No. 3 in the FBS in both yards per game (357.5) and passer rating (211.94) and junior WR Elijah Moore (#8) – No. 1 in receiving yards per game (159.5). For Alabama it’s junior QB Mac Jones (#10) – No. 4 in yards per game (342) and No. 1 in passer rating (222.07) and junior WR Jaylen Waddle (#17) – No. 2 in receiving yards per game (138).

Awarded to the annual winner of the Red River Showdown (also known as the “Red River Rivalry/Classic/Shootout”), the Golden Hat dates to 1941 when the Texas State Fair presented it to the rivalry.  Originally called the “Bronze Hat,” it was upgraded to the gold standard in 1969. According to Lost Lettermen, it’s also never been stolen, lost, broken or vandalized. The Longhorns have worn the hat 40 times vs. the Sooners’ 37. The 1995, 1984 and 1976 games ended in ties.

Louisville’s Friday night road trip to Atlanta to clash with the Yellow Jackets marks only the second time in program history that it’s played a football game in the state of Georgia and the first time it’s ever been at an opponent’s home field.

The only other time the Cardinals have visited the Peach State was in the 2015 season opener, a 31-24 loss to (6) Auburn in the Chick-fil-A College Kickoff in the Georgia Dome in Atlanta.

Good slate of games this week.