Breaking down Week 6 of the 2019 college football schedule 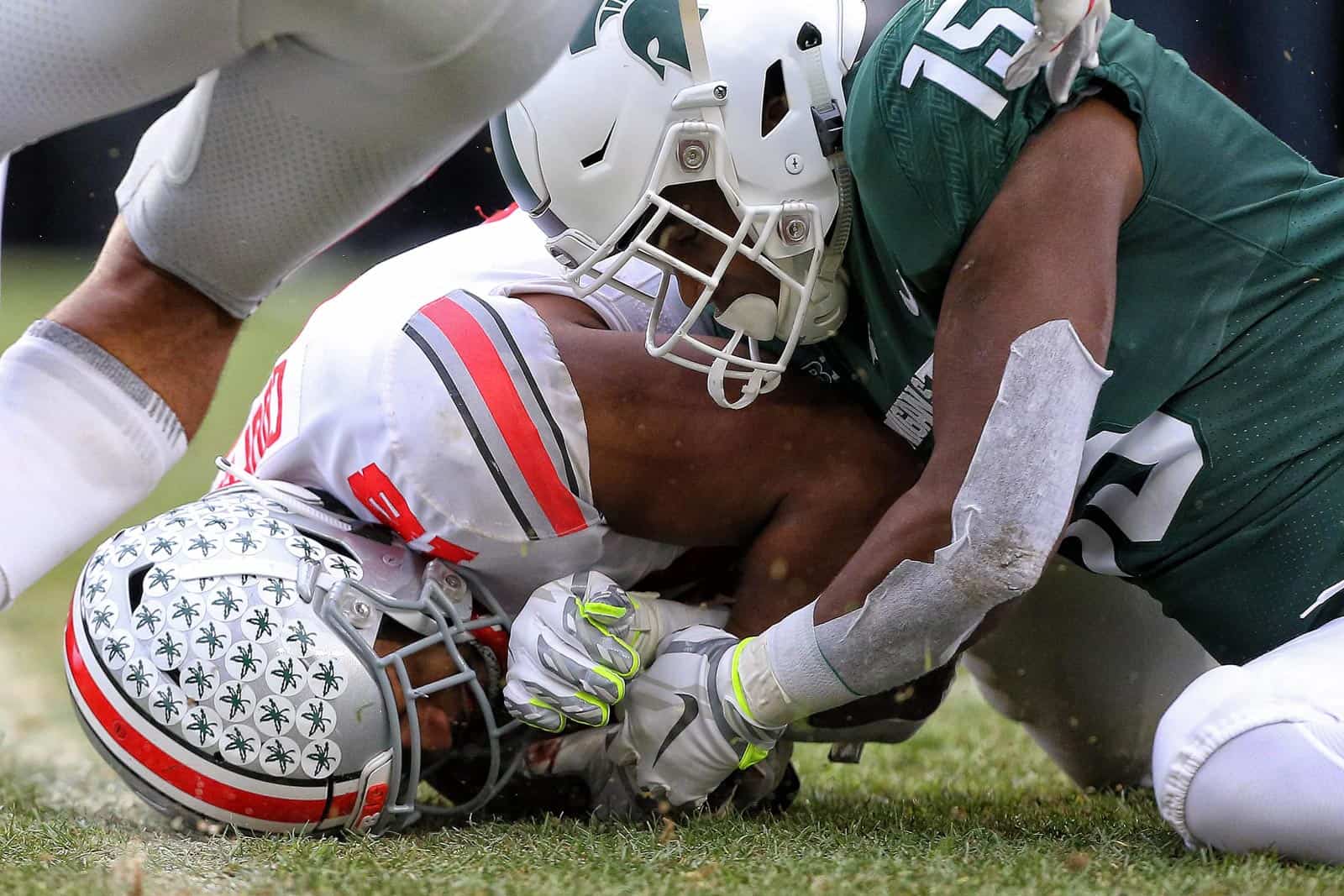 By the time the dust settles on the 2019 campaign, Week 6 of the college football schedule will likely be remembered as a turning point for two of the five Power conferences.

First up, the Big Ten has two of its five undefeated members taking on Top 25 opponents – (4) Ohio State (5-0) hosts (25) Michigan State and (14) Iowa (4-0) visits (19) Michigan. Over in the SEC things get even more exciting as two of its only five perfect programs go head-to-head – (7) Auburn (5-0) at (10) Florida (5-0). Any of these four undefeated programs that score a victory this week will be one crucial step closer to a CFP bracket slot.

The action kicks off with two games apiece on Thursday and Friday nights. The best of the bunch is (18) UCF at Cincinnati (Friday, 8pm EST, ESPN). The Knights are ranked No. 10 in the FBS in pass offense while the Bearcats are No. 15 vs. the pass.

The goodness is spread out across Saturday with something in every time slot. The headliner early is (14) Iowa at (19) Michigan at Noon EST on FOX. Keep an eye on a trio of mismatches at the same time: (6) Oklahoma at Kansas on ABC (the No. 4 ranked rush offense in the FBS vs. the No. 113 ranked rush defense), Utah State at (5) LSU on the SEC Network (the No. 101 ranked pass defense vs. the No. 2 ranked passing attack), and (21) Oklahoma State at Texas Tech on FS1 (detailed in the “Perfect Storms” section below).

Keep in mind that a season high 26% of the field is off this week, a number that includes seven members of the latest AP Top 25.

Despite being the No. 1 rusher in college football, Oklahoma State sophomore RB Chuba Hubbard (#30) isn’t getting any love from the Heisman prognosticators in Vegas. Even if his stock doesn’t rise out west, look for Hubbard to look all-world vs. a Texas Tech defense that’s currently No. 100 nationally (and No. 8 in the Big 12) against the run. The Red Raiders gave up 314 ground yards and three rushing TDs at Arizona in Week 3 and then 201 and four scores last week against (6) Oklahoma. Hubbard is averaging almost 50 yards more per game than any other back in the FBS and has already rushed for 200-plus on three occasions: at Oregon State (221), at Tulsa (256) and at K-State (296).

Unlike Hubbard, Wisconsin junior RB Jonathan Taylor (#23) (the No. 2 running back in college football) is listed among Vegas’ top Heisman contenders – listed fourth in the current odds. He’s also got a golden opportunity to shine in Week 6, taking on a Kent State defense that’s ranked No. 130 (or dead last in the FBS) against the run. The Golden Flashes are allowing, on average, 261 ground yards per game. It’s the same unit that gave up 467 rushing yards and six TDs to Auburn in Week 3.

Hidden beneath the layers of a 2-2 start and a 0-1 record in conference play, Illinois is home to the No. 2 sack man in the FBS – junior DL Oluwole Betiku Jr. (#47). He’s already recorded seven sacks this season, second only to Ohio State junior DL Chase Young with eight. But, Young’s eight came in five outings (1.6 per game) while Betiku’s came in just four (1.75 per game). Cue up Minnesota, which though off to a 4-0 start for the first time since 2013 is ranked No. 115 in the country (and No. 14 in the Big Ten) in sacks allowed (15). Only nine teams in the entire FBS have given up more. And the Golden Gophers, like OSU, have only played four games this season.

If you’re looking for a potential Week 6 Battle Royale, this could be it. Tune in to see Ohio State’s No. 3 ranked scoring offense – averaging a cool 52.4 points per game – take on Michigan State’s No. 14 ranked scoring D – giving up a mere 15 points per game. The key matchup is a battle of strength in the ground game pitting the Buckeye’s No. 7 ranked rushing attack against the Spartans’ No. 4 ranked rush D. Players to watch include Ohio State junior RB J.K. Dobbins (#2), the No. 3 running back in the FBS in yards per game (130.8) and Michigan State linebackers senior Joe Bachie (#35) – No. 1 in the Big Ten in tackles (46) and junior Antjuan Simmons (#34) – tied for the sixth-most tackles for a loss in the FBS (7.5).

First awarded in 2008, the Bronze Stalk “depicts several cornstalks recognizing the Midwestern landscape surrounding DeKalb and Muncie.” The two campuses are located 285 miles apart in neighboring states. Ball State captured the first-ever stalk but has sent home the sheaf with NIU every year since.

The Commander in Chief’s Trophy – Air Force at Navy – series started in 1960 – Air Force leads 30-21, the two have split the last six, the home team winning on each occasion.

The first leg of the three-way contest between Army, Navy and Air Force, the Commander in Chief was established in 1972 to ensure that the newer Air Force Academy (which kicked off football in 1957) would play Navy and Army (both fielding a team since 1891) annually. The Falcons lead the way with 20 trophies, followed by the Midshipmen with 15 and the Black Knights with eight. Army won the last two Commander in Chief’s – its first consecutive victories in history.

Army visits Air Force on Nov. 2 and meets Navy in Philadelphia on Dec. 14.

The second leg of the three-pronged battle between Central Michigan, Eastern Michigan and Western Michigan. Established in 2005 by the Michigan Sports Hall of Fame, the Michigan MAC is awarded to both a football and basketball recipient. CMU and WMU are tied with five football Michigan MACs apiece and EMU lags one back with four. WMU currently holds the title.

Last Saturday, WMU beat CMU 31-15 in Kalamazoo, if the Broncos can score a win at EMU on Oct. 19, they’ll retain the Trophy.

In a repeat of last year’s most amazing schedule factoid, Liberty and New Mexico State are – once again – slated to play twice. First up is this Saturday’s meeting in Las Cruces, N.M., followed by a rematch in the regular-season finale, on Nov. 30, in Lynchburg, Va. Given that the two also met on Oct. 6 and Nov. 24 last season (with the home team winning on each occasion), it means that the two schools will have played four regular-season games in just 421 days.

According to Eric Single of SI.com, it’s the “first time two Division I football teams have played twice in the regular season since 1998, when UMass met UConn on Oct. 24 and Nov. 21.” Read all of Single’s excellent piece to understand the complexities of how “desperation” contributed to Liberty and New Mexico State’s historic four-game series becoming a reality.