Breaking down Week 5 of the 2019 college football schedule 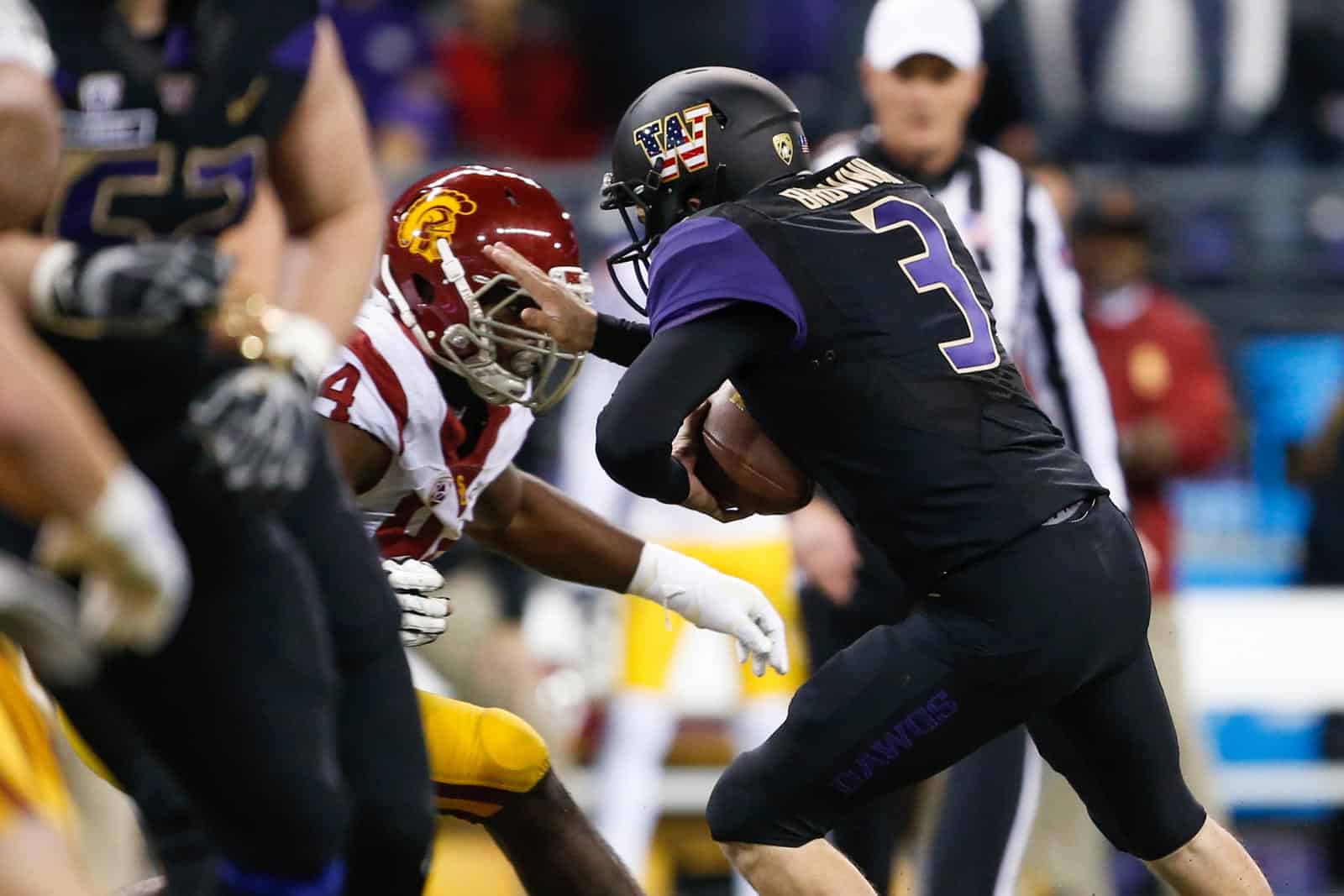 And just like that, it’s Week 5, which is also the final weekend of college football in September.

The festivities kickoff with a single game on Thursday night featuring two run-centric squads, both of which also have defenses that have performed well against the run – Navy at Memphis at 8pm EST on ESPN.

Friday night serves up four contests, two of which include ranked teams. First, (12) Penn State travels to Maryland at 8pm EST on FS1. While this one may look like a blow-out waiting to happen, did you know that the Terrapins are ranked No. 8 in rushing offense while Penn State is No. 9 in rush defense? For late night fun, tune in to Arizona State at (15) Cal at 10:30pm on ESPN. The 4-0 Golden Bears are ranked the highest they’ve been since 2009.

Saturday begins with a handful of ranked teams taking on what, at least on the surface, looks like an underwhelming set of opponents. Each kicks off at Noon EST: Texas Tech at (6) Oklahoma (FOX), Northwestern at (8) Wisconsin (ABC), Middle Tennessee at (14) Iowa (ESPN 2), Rutgers at (20) Michigan (Big Ten Network), and (23) Texas A&M at Arkansas (ESPN). Anybody else get a sneaking suspicion that there’s at least one upset brewing in this group?

If you only have one time slot to dedicate to college football this weekend, the mid-afternoon is your dream destination as it features the only two ranked vs. ranked matchups in Week 5 – (18) Virginia at (10) Notre Dame (NBC) and (21) USC at (17) Washington (FOX). But wait! There’s more – (1) Clemson is at North Carolina (ABC) and Ole Miss visits (2) Alabama (CBS). It all happens at 3:30pm EST.

Even though the primetime headliner is (5) Ohio State at Nebraska (7:30pm EST, ABC), the more compelling matchup might be Mississippi State at (7) Auburn (7pm EST, ESPN). Also worth keeping an eye on is (24) Kansas State at Oklahoma State (7pm EST, ESPN+) – the Wildcats are No. 7 in rush offense while the Cowboys are No. 92 vs. the run.

Stay up late to watch two programs who suffered tough losses last week and need to rebound – Washington State at (19) Utah at 10pm EST on FS1. Thirty-minutes later you can tune into ESPN to see UCLA visit Arizona. The Bruins went from scoring 14 points per game in their first three outings to ringing up 67 last week. The Wildcats are ranked No. 105 in scoring defense.

BYU is a respectable 2-2 after playing four straight Power opponents, three of which were ranked at game time. Based on that detail, it’s not super-shocking that the Cougars have allowed, on average, 32 points per game (No. 101 in the FBS). Delving deeper, while they’ve been decent vs. the pass (No. 54), they’ve struggled to stop the run, giving up 215.5 yards per game (No. 116). It makes Toledo – ranked No. 11 in the nation in rushing offense – a bit of a wolf in sheep’s clothing. Keep an eye on the Rockets’ sophomore RB Bryant Koback (#22), he hung up 228 yards and three scores on Colorado State in last week’s 41-35 win.

While Alabama tends to stay in a state of domination, it’s No. 3 ranked passing attack may look other-worldly this Saturday vs. the Rebels’ defense, currently ranked No. 114 in the FBS against the pass. Ole Miss has given up 300 or more air yards in each of its last three outings, including coughing up 309 yards and two scores to FCS Southeastern Louisiana in Week 3 and 373 and four scores to (15) Cal last week. If you like listening to commentators’ gush about how Alabama has already (in September) locked up its first-ever Heisman by a quarterback, this one’s for you. Junior QB Tua Tagovailoa (#13) is currently tied for the second-most TD passes in the nation (17) and is No. 3 in passer rating (225.27).

What this one lacks in perceived watchability it more than makes up for in potential explosiveness. In what is the biggest statistical mismatch in Week 5, tune in to watch the nation’s No. 1 receiver take on the worst pass defense in the Americas. On one side of the provocative equation is senior Liberty WR Antonio Gandy-Golden (#11) – who’s averaging 136 receiving yards per game. On the flip side is New Mexico’s defense – which is generously allowing 404 passing yards per game. It’s the same unit that gave up 443 air yards to FCS Sam Houston State in the opener.

Another less-than-sexy selection with tons of potential, Troy is quietly operating the No. 13 ranked pass offense in the nation while Arkansas State’s secondary is ranked No. 115. Keep an eye on senior Trojan QB Kaleb Barker (#7), No. 6 in the nation in yards per game (333.33). His 504 yards and four scores in a Week 3 loss to Southern Miss (47-42) set a school record.

Awarded since 1950, legend has it that the Spittoon was originally purchased at a Lansing antique store by Michigan State grad Gene McDermott. But why? Well, “in order to avoid a letdown in the game against Indiana just a week after knocking off rival Notre Dame.” Did it work? Absolutely – the Spartans blanked the Hoosiers 35-0 and took possession of the Spittoon first. MSU has won the Ole’ Spit Cup 48 times vs. Indiana’s 12, the 1977 game ended in a tie.

Though Texas A&M didn’t join former fellow Southwest Conference member Arkansas in the SEC until 2012, the Southwest Classic kicked-off in 2009, when the Aggies were still in the Big 12. The two shared membership in the old SWC for 76-years (1915-91). Except for a home-and-home in 2012-13 the two have met in Arlington, Texas every year since 2009. The Aggies have won seven Classics vs. Arkansas’ three.

An actual trophy as opposed to an actual weapon, this traveling prize honors the cannons that both schools traditionally discharge on game days. It was first awarded in 2008 to the winner of what’s also known as the “Central-Western” rivalry. WMU has won the Cannon six times vs. CMU’s five.

This Saturday’s showdown between Dabo Swinney and Mack Brown in Chapel Hill is the first time the two have ever met as head coaches. But that doesn’t mean that the matchup lacks history.

According to an excellent piece penned by Chuck Carlton of the The Dallas Morning News, when Swinney took over as the head coach at Clemson a decade ago, he reached out to big name coaches for advice. The only guy he heard back from was Mack Brown, who, then at Texas, invited him for a visit in March of 2009.

The two have kept in contact through the years, according to Carlton, exchanging texts about Brown’s return to UNC this season.

Brown said Swinney even sent him a text wondering if he was taking the North Carolina job after rumors surfaced.

Brown replied: ‘I’ve appealed the NCAA and if they allow us not to play Clemson while I’m at North Carolina, I’ll take the job.’