Breaking down Week 13 of the 2018 college football schedule 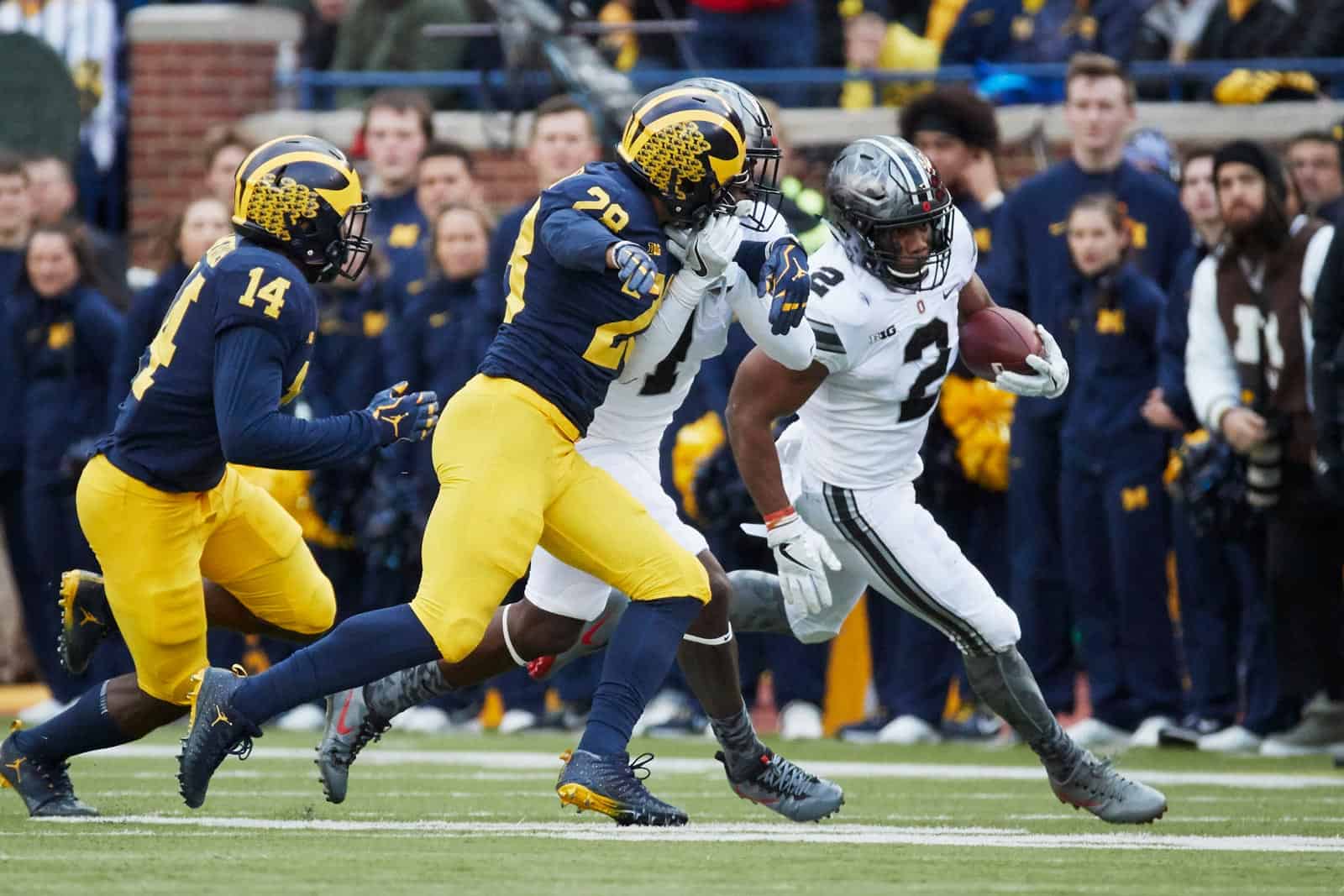 Not only is Week 13 of the college football schedule the final stanza of the regular season, it comes complete with a cornucopia of rivalry games.

After two Tuesday night MAC games, we get Wednesday off to gird our loins for a big Thursday and Friday. Thanksgiving kicks off at 3:30pm EST on CBSSN with Air Force’s powerful ground game (No. 5 in the FBS) taking on a Colorado State defense ranked No. 104 vs. the run. In primetime it’s Ole Miss’ No. 2 ranked aerial attack squaring off with (18) Mississippi State’s No. 8 ranked secondary at 7:30pm EST on ESPN.

Friday features 15 games spread across the entire day, making it like a mini-Saturday. The best stuff comes in the evening – (6) Oklahoma at (13) West Virginia at 8pm EST on ESPN and (16) Washington at (8) Washington State at 8:30pm EST on FOX.

Things get started early on Saturday – tune in at Noon EST on FOX to watch (4) Michigan try to beat (10) Ohio State for the first time in six tries. The Iron Bowl dominates the midafternoon time slot, (1) Alabama hosting Auburn at 3:30pm EST on CBS.

In primetime, it’s (3) Notre Dame at USC on 8pm EST on ABC. The Trojans have the last shot to topple the Irish, who without a conference title game to deal with won’t play again until the CFB Playoff committee meets to decide their fate.

With a whopping 19 rivalry trophies up for grab (see the details below), there’s literally something meaningful to watch all day on both Friday and Saturday.

8: Toledo has won 8-straight over Central Michigan (last loss in 2009)

Perhaps the best statistical matchup of 2018, tune in to this one to see the Buckeyes’ No. 3 ranked passing attack – that’s a national number – take on a Wolverine D ranked No. 1 in the FBS vs. the pass. Though both statistical achievements are impressive, it will be intriguing to see how they hold up against the toughest opposing units either will face in the regular season. The highest ranked secondary Ohio State has played thus far belongs to (12) Penn State, which is currently No. 23 nationally in pass defense. The Nittany Lions held the Bucks to 270 passing yards (almost 100 yards fewer than their season average) in a narrow 27-26 OSU win on Sept. 29. The best aerial attack Michigan’s top-ranked D has grappled with in 2018 belongs to SMU, currently No. 31 nationally. The Wolverines gave a season-high 209 to the Mustangs in a 45-20 blowout win on Sept. 15.

Despite missing two games this season due to injury, Temple senior running back Ryquell Armstead (#7) is the No. 11 rusher in college football, averaging 115.78 yards per game. His 210-yard, six touchdown performance at Houston on Nov. 10 set an AAC record for rushing TDs. This week he and the Owls travel to UConn, the owner and operator of the most generous rushing defense in the FBS. Allowing an average of 338.82 ground yards, the Huskies are the only unit in the nation giving up 300-plus per game. The only time they’ve held an opponent to fewer than 200 came in what was also their only win in 2018, giving up 199 in a 56-49 victory over FCS Rhode Island on Sept. 15.

Though Clemson is ranked an impressive No. 28 nationally in passing yards per game, it’s bread and butter offensively speaking is it’s rushing attack, ranked No. 14 and averaging just shy of 250 yards per game. This sets up well against a South Carolina D ranked No. 93 nationally and No. 12 in the SEC in rushing defense. The Gamecocks coughed up 271 ground yards in their loss to (5) Georgia, 286 in a win over Missouri, 237 in a win at Ole Miss and a season-high 389 in a narrow defeat at (11) Florida. This creates an opportunity for Clemson sophomore running back Travis Etienne (#9) to climb the Heisman odds. His 17 rushing TDs are tied for the second-most in the FBS while his 8.5 yards per carry put him at No. 8.

The Apple Cup didn’t officially fall off the tree until 1962, “in honor of Washington State’s delicious and iconic apples.” Originally, the Huskies and Cougars played for their version of a Governor’s Trophy. If you measure the rivalry in Apples only, Washington has won 40 vs. Washington State’s 16.

Established in 1996, the Commonwealth Cup is a whopper. At four-feet high and weighing in at 100 pounds it’s big enough for the scores of every previous game between the two programs to be listed on its base. Virginia Tech has won 19 Cups vs. Virginia’s three. The Cavaliers haven’t won the Cup since 2003.

Awarded to the winner of the Egg Bowl, the Golden Egg was introduced after the 1926 game in Starkville, when underdog Ole Miss scored an unexpected 7-6 win over then Mississippi A&M. Zealous Rebel fans stormed the field after the game, rushing towards the goal posts only to be beat back with cane chairs by State fans. The incident was so ugly that the student bodies decided to present a trophy after the next game “in a dignified ceremony designed to calm fans.” Ole Miss has collected 56 Eggs vs. Mississippi State’s 29.

One of three Governor’s Cups awarded in the FBS, the Georgia version goes to the winner of the game famously know as “Clean, Old-Fashioned Hate.” If there is ever any doubt of the advertised “hate” here’s a snippet from Georgia Tech’s fight song, “And if I had a son, sir, I’d tell you what he’d do. He would yell ‘To Hell With Georgia’ like his daddy used to do.”

The Governor’s Cup (Kentucky) – (15) Kentucky at Louisville – series started in 1912 – tied at 15 wins apiece but Louisville has won six out of the last seven.

The Kentucky Governor’s Cup dates back to 1994, when the two schools renewed their rivalry after a 70-year break. The earlier games were all played between 1912 and 1924, six Kentucky wins by a combined score of 210-0. Since ’94 Louisville has earned a 15-9 advantage.

The Heroes Trophy was introduced in 2011, Nebraska’s first season in the Big Ten. The name was chosen with the intent of honoring one citizen apiece from Iowa and Nebraska for “extraordinary acts”. Thus far, the Hawkeye’s have won the award four times vs. the Cornhuskers three.

Dating back to 1948, the trophy presented to the winner of the Iron Bowl was the brainchild of the Alabama and Auburn chapters of Omicron Delta Kappa, a national leadership honor society. In January 1978, it was dedicated to Dean James E. Foy V as he retired as the Dean of Student Affairs at Auburn. Prior to taking on that role in 1950, Foy had served as the Assistant Dean of Students at Alabama. The Crimson Tide have won 41 ODK’s vs. the Tigers’ 29.

First introduced in 2009, the Land of Lincoln, which depicts Abraham Lincoln’s iconic hat, was the result of an online contest which included both schools’ fanbases. The two teams played for the Sweet Sioux Tomahawk from 1945 to 2008 but it was retired “out of respect for Native American Nations.” Northwestern has won six of the new awards vs. Illinois’ three.

Dating all the way back to 1925, the Old Oaken Bucket was initiated by an alumnus of each school charged with finding a traveling trophy. The duo struck gold at an Indiana farm, where an old bucket, now the Old Oaken Bucket, hung from a well. The first game played for the prize ended in a 0-0 tie, which explains the bronze “IP” attached to the Bucket’s handle. This led to the tradition of a bronze “I” or “P” being linked to the trophy for each team’s win. So far, 59 “P’s” have been attached vs. 31 “I’s.”

The Palmetto Bowl Trophy replaced the Hardee’s Trophy in 2015, it also marked the first time the state of South Carolina’s rivalry game had an official name. Clemson has been at least a two-touchdown favorite in each of the last three Palmetto Bowls, this year the Tigers make it four-peat as 26.5-point favorites.

Introduced in 1948, Paul Bunyan’s Axe, was preceded by a wood-crafted Slab of Bacon, awarded to the winner beginning in 1930. The tradition of “bringing home the bacon” was halted in the early 1940s when the slab went missing (it was found in 1994 in Madison). Recorded on the handle of Bunyan’s Axe are the winners of every game since the series began. Wisconsin has taken possession of the Axe 43 times vs. Minnesota’s 24.

Awarded to the winner of the Civil War, the Platypus Trophy was sculpted (but never officially finished – it’s missing its feet) by an Oregon art student in 1959. Oregon State won the first-ever Trophy game and then retained it until 1961 when it disappeared, not to be uncovered again until 2006. It was reintroduced in 2007. Since then, the Ducks have won the duck-billed mammal nine times vs. the Beavers’ two.

The Ram-Falcon was the brainchild of the Air Force ROTC unit at Colorado State. First awarded in 1980, the trophy itself is a depiction of a Ram and Falcon squaring off atop a wooden base. Air Force has captured the prize 23 times vs. CSU’s 15.

The Territorial Cup – Arizona State at Arizona – series started in 1899 – Arizona leads 49-41-1, the two have split the last four.

The Valley Trophy is a giant metallic “V” established in 2013 to “acknowledge the rivals that represent the Silicon Valley and San Joaquin Valley, respectively.” San Jose State has won the big “V” three times vs. Fresno State’s twice.

Not to be confused with the Battles of I-10 (New Mexico State vs. UTEP) and/or I-75 (Bowling Green vs. Toledo), the War on I-4 is an “annual series of scored competitions across multiple sports programs” representing South Florida and UCF. It kicked off in 2016, the Bulls and Knights both winning the award once since its inception. The two schools are located 100 miles apart on Interstate 4 in central Florida.

Last but certainly not least, the Ragin Cajuns and Warhawks have played annually since 1997 in a contest referred to as “The Battle of the Bayou”. The two also met consecutively from 1953-71, under their previous names. In 1999, Northeastern Louisiana University (NLU) became Louisiana-Monroe and the University of Southwestern Louisiana (USL) became Louisiana. The Wooden Boot trophy debuted in 2002 – the Ragin Cajuns have won the boot nine times vs. the Warhawks’ seven.

(14) Texas travels to Lawrence to play Kansas this Friday, snapping a 100-year streak of playing an opponent from the Lone Star State over the holiday weekend.

Texas did play Texas A&M a century ago, in 1917, but the game took place on Tuesday, Nov. 20, the week before Thanksgiving. The Longhorns squared off with Arkansas on Turkey Day that season, blanking the Hogs 20-0 in Austin.

From 1918-77 Texas and Texas A&M clashed each Thanksgiving week. From 1978-95 the Longhorns rotated between the Aggies and Baylor, meeting the former ten times and the latter on seven occasions. From 1996-2011 it was back to A&M, the rivalry suspended only after the Aggies fled to the SEC in 2012.