Breaking down Week 10 of the 2018 college football schedule 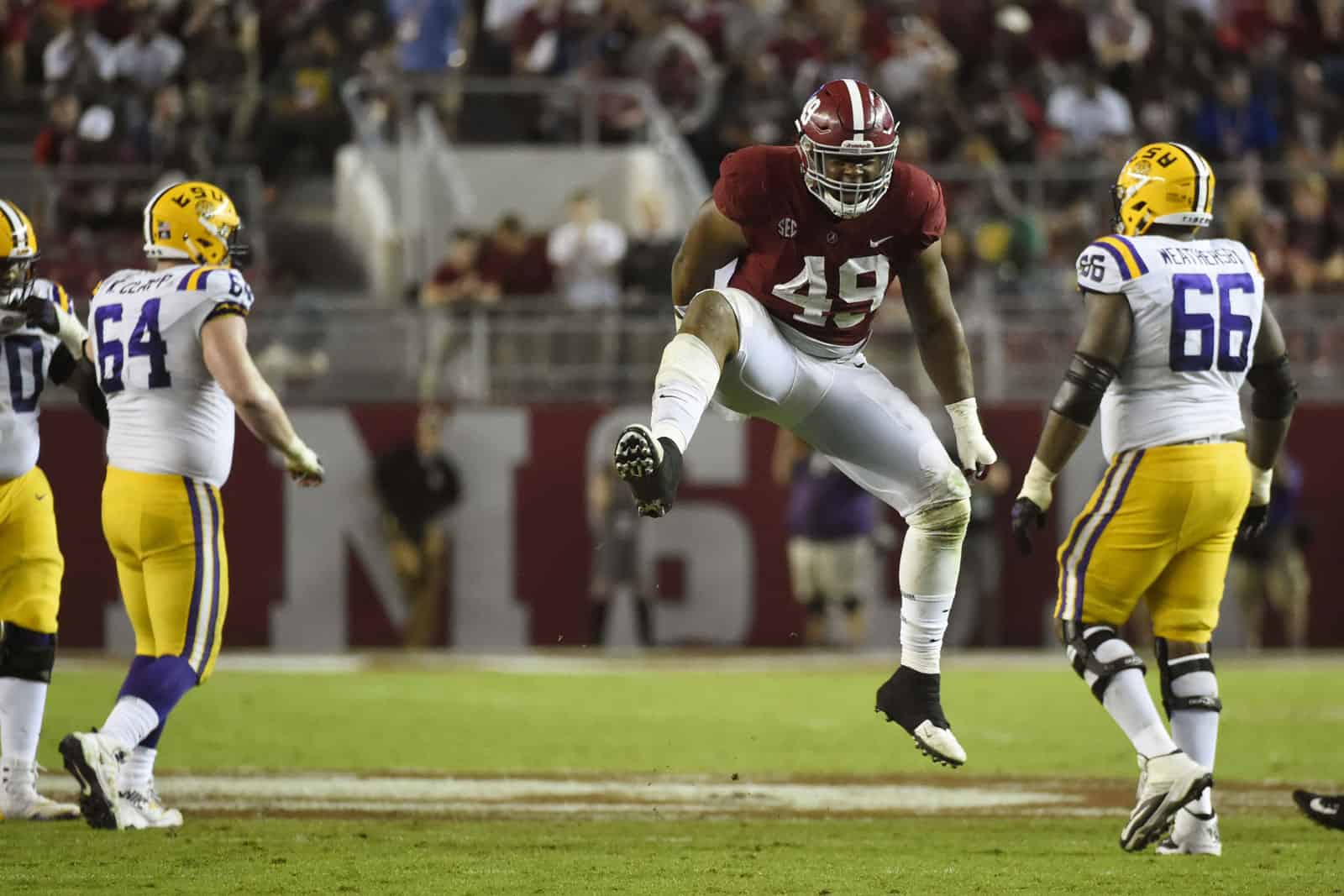 Week 10 of the college football schedule means we’re only four Saturdays away from conference championship weekend. In other words, there are only four games standing between your team and its destiny for 2018.

Of the nine contests slated before Saturday, five are MAC conference games. On Thursday night, tune in to ESPN at 7:30pm EST to watch (12) UCF’s No. 5 ranked scoring offense take on a Temple defense ranked No. 4 nationally vs. the pass and No. 23 in yards per game. Friday night features the only Power vs. Power matchups prior to the weekend – Pitt at (25) Virginia at 7:30pm EST on ESPN2 and Colorado at Arizona at 10:30pm EST on FS1.

Though the crown jewel of primetime is (1) Alabama at (3) LSU at 8pm EST on CBS, don’t sleep on (4) Notre Dame at Northwestern, which gets rolling 45-minutes earlier at 7:15pm EST on ESPN.

If you’re looking for a late-night treat, tune back in to ESPN at 10:45pm EST to see Cal’s No. 8 ranked passing defense (that’s a national ranking) try its luck vs. (8) Washington State’s air attack – the No. 1 most-potent unit in the Americas.

As a note, from this week onward, we’ll switch from using the AP Top 25 rankings to the CFB Playoff rankings.

Hidden beneath the layers of shock and awe after Purdue’s Week 8 beatdown of then No. 2 Ohio State was the record-setting performance of Buckeye sophomore quarterback Dwayne Haskins (#7). His whopping 470 passing yards set a single-game record for OSU. Keep in mind that the Boilermakers D was ranked No. 109 nationally vs. the pass coming into the now infamous game. After a bye, Ohio State gets Nebraska in Week 10, the owner and operator of the No. 111 ranked pass defense in the country. These are the same guys who gave up 455 and 349 passing yards respectively in back-to-back games vs. Northwestern and Minnesota. Don’t only expect the Bucks to be angry coming into this one, expect their passing attack – ranked No. 2 in the FBS in yards per game – to go berserk vs. the Huskers. Also expect “Haskins for Heisman” signs to start popping up in front yards across Columbus.

No program in the FBS has registered more sacks than has Oklahoma State with a cool 31. That’s five more than the 26 earned by the likes of (10) Ohio State, (2) Clemson, and (1) Alabama. Enter in Baylor – at No. 119 in the nation and dead last in the Big 12 in sacks allowed – and you get the picture. The Bears have coughed up 26 sacks in eight games – that’s one more than 1-8 Central Michigan and two more than Kansas. Keep an eye on junior defensive end Jordan Brailford (#94), his nine sacks are No. 1 in the Big 12 and tied for No. 3 in the nation.

While you’d expect Army and Air Force, which both run the option, to have top-ranked rushing attacks (they’re No. 2 and No. 8 in the FBS respectively) what makes this one special is how well the two academies’ defenses have performed vs. the run. The Black Knights are No. 8 in the nation in rushing D while the Falcons come in at No. 16. It makes for a classic battle of strength vs. strength and earns the matchup our coveted Battle Royale tag for Week 10.

Florida State is currently ranked No. 122 vs. the pass, meaning only seven teams in the entire nation have given up more yards through the air than the Seminoles. It’s a stunning reverse for a secondary that finished five of the last seven seasons ranked in the Top 30 nationally in pass D. The lowest mark, a drop to No. 60 in 2014, is 62 slots better than the current position. It makes the road trip to NC State – the No. 6 ranked passing attack in America – look as scary as envisioning Texas Tech defending the triple option. Players to watch include Wolfpack senior quarterback Ryan Finley (#15), the No. 7 passer in the FBS, and junior wide receiver Kelvin Harmon (#3), the No. 5 pass grabber in the nation.

Located precisely 100-miles apart, Western Kentucky and Middle Tennessee have shared conference membership at both the FCS (Ohio Valley) and FBS (Sun Belt and now C-USA) levels. They’ve played 67- times total and met consecutively from 1952 to 1985. The trophy itself is a whopper, a golden transportation-themed tribute to hating your nearest neighbor.

The Anniversary Award dates to 1985 when the alumni associations of both schools established a traveling trophy to commemorate the 75th anniversary of each institution. Both were founded in 1910 in northern Ohio – Bowling Green in the west and Kent 150 miles to the east. The Falcons have won 25 Anniversaries vs. the Golden Flashes’ seven.

The three-way contest between Army, Navy, and Air Force, the Commander in Chief was established in 1972 to ensure that the newer Air Force Academy (which kicked off football in 1957) would play Navy and Army (both dating back to 1891) annually. The Falcons lead the way with 20 trophies, followed by the Midshipmen with 15 and the Black Knights with seven. Army captured the prize last season for the first time since 1996.

Air Force’s 35-7 win over Navy on Oct. 6 means a win over Army would seal the deal on the Falcon’s 21st Commander in Chief. If the Black Knights beat the Falcons, they will retain the trophy and have a chance to win it outright by defeating the Midshipmen on Dec. 8.

The Shula Bowl and Trophy kicked off in 2002, the first year the two schools, located only 60-miles apart, met on the gridiron. FAU first fielded a football team in 2001, FIU followed in 2002.

Navy’s road trip to Cincinnati this Saturday afternoon marks the first-time in history that it has visited the Bearcats and only the eighth-time it’s ever played an FBS opponent in the state of Ohio.

Overall, the Midshipmen are 2-5 in the Buckeye State: 0-2 at Ohio State, 0-1 at Bowling Green, 1-2 at Toledo and 1-0 at Kent State. They’ve never visited Akron, Miami or Ohio University.