Breaking down Week 10 of the 2017 college football schedule 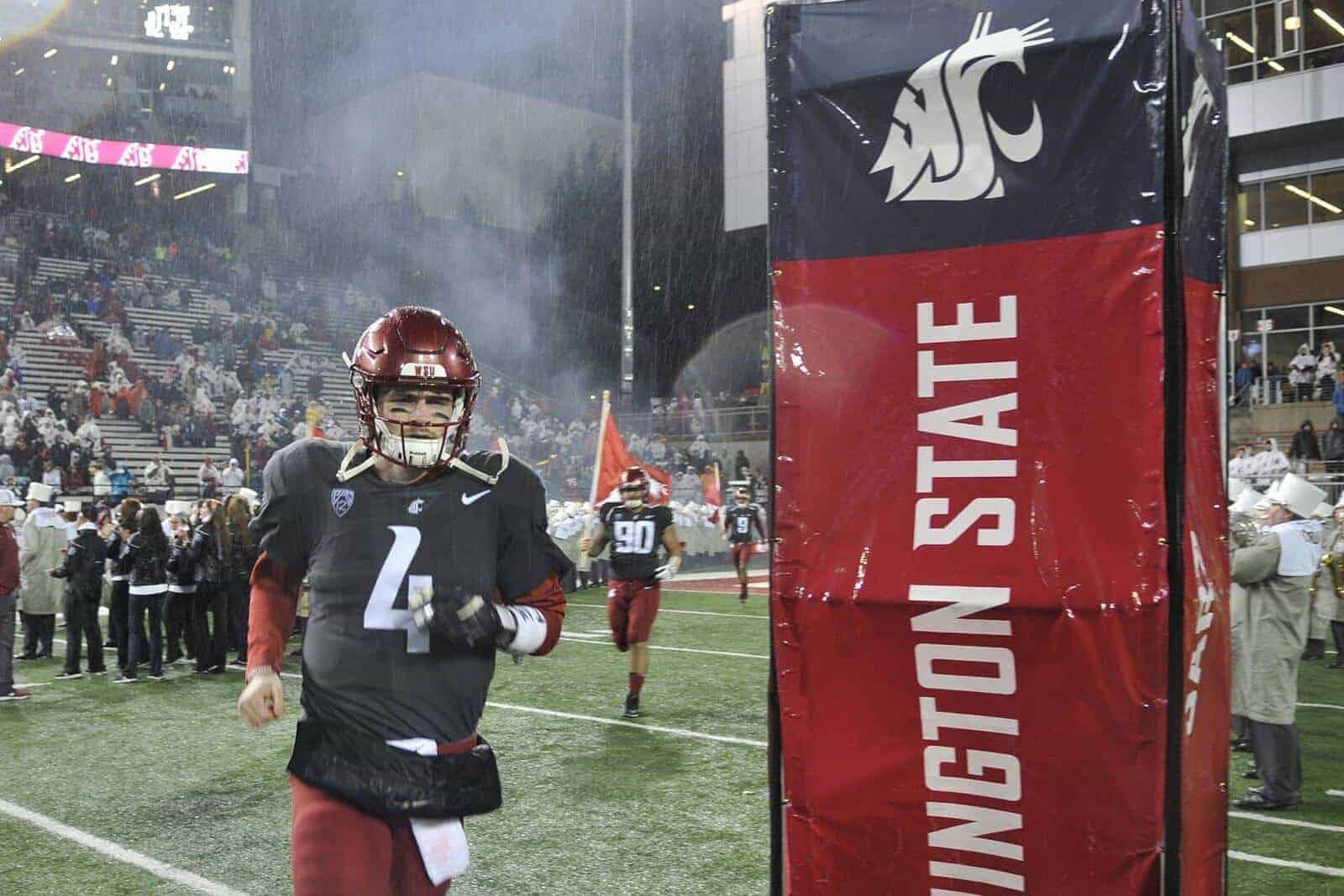 If you liked Week 9 of the college football schedule, you’re going to love Week 10.

Gird your loins and prepare to be wowed by seven Ranked vs. Ranked contests, the most we’ve enjoyed all season. It’s almost double what was offered in Weeks 2 and 9, previously the high-water marks of 2017. If that weren’t enough, all five Power conferences are included as are five members of the Top Ten.

The goodness is spread out over a super Saturday that simply cannot be missed, with every-single time slot well and truly blessed.

While there are two games on Tuesday, one on Wednesday, four on Thursday and three on Friday, the only ranked team in action before the weekend is (23) Memphis at Tulsa on Friday night on ESPN2.

As a programming note, this week we’re switching from the AP Top 25 rankings to those offered up by the CFB Playoff committee.

What’s fueled the fire offensively for 7-1 Memphis is its passing game, the tenth-best attack in the FBS. Tune in to see Tiger senior quarterback Riley Ferguson (#4), the No. 7 passer in the nation, as he takes on Tulsa’s No. 119 ranked pass defense. The Golden Hurricane D coughed up 350-plus air yards in each of its last two outings – 372 at UConn and 366 at SMU. Keep an eye on Memphis senior wide receiver Anthony Miller (#3), his 10 touchdowns and 14.08 yards per catch are both the second-best marks in all of college football.

Texas A&M has allowed 22 sacks thus far this season, the 10th most in the SEC and a dismal No. 99 nationally. With four games left to play, it’s already more than the 21 the Aggies gave up in all of 2016. Cue up Auburn, tied for the 12th most sacks in the FBS with 25, and you get the picture. The Tigers’ D is led up front by junior outside linebacker Jeff Holland (#4), his eight sacks are the most in the SEC and tie him for the third-most nationally.

Though it’s no shock that option-centric Army is No. 2 in the FBS in rushing yards per game (362.13), did you know that Air Force’s defense ranks No. 119 vs. the run? It’s the Falcons’ lowest mark since 2013 and a far, far cry last year’s No. 10 finish nationally. It sets up an incredible opportunity for the Black Knights to vanquish Air Force for the first time since 2012. If that were to happen, given the Falcons’ loss earlier this season to Navy, Army would only need a season-ending win over the Midshipmen to capture its first Commander-in-Chief trophy since 1996. The Black Knights’ leading rusher is senior quarterback Ahmad Bradshaw (#17). His 108.38 yards per game is No. 18 among all backs nationally and No. 4 among QBs.

Another opportunity for a talented rusher, tune in late Saturday to see the No. 4 back in college football – San Diego State’s senior running back Rashaad Penny (#20) – take on San Jose State’s No. 128 ranked rushing D. Only Tulsa and UCLA have given up more ground yards than the Spartans this season, while only Stanford’s Bryce Love has rushed for more total yards than Penny. What makes this one even more compelling is San Jose State junior linebacker Frank Ginda (#5). Despite playing for a struggling defense, he leads the FBS in total tackles (124) and solo tackles (69).

The Anniversary Award dates to 1985 when the alumni associations of both schools established a traveling trophy to commemorate the 75th anniversary of each institution. Both were founded in 1910 in northern Ohio – Bowling Green in the west and Kent 150 miles to the east. The Falcons have won 24 Anniversaries vs. the Golden Flashes’ seven.

The original traveling prize for Bedlam was the clapper from the bell that hung in Old Central on the Oklahoma State campus. The first time the Cowboys (originally the Oklahoma A&M Aggies) ever beat the Sooners, in 1917, the bell was rung all night. The clapper was eventually absconded, changing hands until 1966, when the two schools agreed to use it as a trophy. It has since been replaced by a crystal bell. Oklahoma has won the crystal clapper 41 times vs. OSU’s 9, the 1992 game ended in a tie.

Awarded to the winner of the “Border War” since 1968, the Bronze Boot is just that – a bronzed jump boot formerly worn by Colorado State alum and Vietnam veteran Jeff Romero, Sr. In one of the coolest traditions associated with a rivalry game, the two schools’ ROTC detachments meet at the Wyoming/Colorado border each year after the contest with the game ball, the school hosting the next season’s game running the ball back to its stadium. The Cowboys have captured the Boot 25 times vs. the Rams’ 24.

The Cannon – Illinois at Purdue – series started in 1890 – Illinois leads 44-42-6, the two have split the last four, the visiting team winning on each occasion.

One of the three FBS rivalry cannons, the tale of the Big Ten edition of the Cannon stretches back over 100 years ago, to 1905. That’s when Purdue students brought the scaled-down firearm to Illinois with hopes of firing it off after a win. Illinois fans found the weapon, hidden near their stadium, and captured it. It was retained by one of the Illini students involved in its confiscation until 1943, when he offered it up to be used as a traveling trophy. The Boilermakers have recaptured the Cannon 34 times vs. the Illini’s 29. The 1956 and 1959 games ended in ties.

The three-way contest between Army, Navy and Air Force, the Commander in Chief was established in 1972 to ensure that the newer Air Force Academy (which kicked off football in 1957) would play Navy and Army (both dating back to 1891) annually. The Falcons lead the way with 20 trophies (including last season’s), followed by the Midshipmen with 15 and the Black Knights with 6.

Navy’s last-minute victory over Air Force on Oct. 7 means the Falcons need to score a win over Army to stay in the hunt for the trophy.

The Land Grant dates to 1993, when Penn State joined the Big Ten and renewed its series with Michigan State, who it hadn’t played since 1966. The name honors the fact that both schools (founded just 10 days apart in 1855) were “pioneer land-grant schools in the nation.” The trophy features landmarks from each campus as well as the team’s mascots. Penn State has won 14 Land Grants vs. Michigan State’s seven.

The Little Brown Jug – Minnesota at Michigan – series started in 1892 – Michigan leads 74-25-3 and has won seven of the last eight.

The self-proclaimed “oldest trophy game in FBS college football” the Little Brown Jug debuted in 1909. Legend has it that the jug itself dates to 1903 when 10-0 Minnesota hosted a Michigan squad on a 29-game winning streak. Fielding Yost, the Wolverines’ head coach, doubted that the Golden Gophers would provide sanitary water for the visitors and had the team’s manager visit a Minneapolis store to purchase a five-gallon water jug. The game ended in a 6-6 tie, with Minnesota scoring a touchdown on the final play. Pandemonium ensued, and Michigan left the jug behind. The Gophers painted the score on the vessel and hung it from the coaches’ office ceiling.

The two teams didn’t meet again until 1909, when the Wolverines hit the road again and won 15-6. Not only did it give them the right to finally return home with their Jug – it kicked off a 108-year old tradition. Michigan has won the Jug 71 times vs. Minnesota’s 23.

The Textile Bowl Trophy was first introduced in 1981, a “part of a joint marketing effort by the textile commissions of both North Carolina and South Carolina…State and Clemson boast two of the largest, most respected textile schools in the country and have similar academic missions.” The Tigers have captured the weavers’ prize 26 times vs. the Wolfpack’s 10.

An actual trophy as opposed to an actual weapon, this traveling prize honors the cannons that both schools traditionally discharge on game days. It was first awarded in 2008 to the winner of what’s also known as the “Central-Western” rivalry. WMU has won the cannon five times vs. CMU’s four.

It’s also the second leg of the three-pronged Michigan MAC Trophy, awarded since 2005 to the annual victor in the Central Michigan/Eastern Michigan/Western Michigan series. WMU defeated EMU in overtime earlier this season, meaning a win over CMU would earn the Broncos a fourth-consecutive Michigan MAC title.

(5) Oklahoma travels to (11) Oklahoma State this Saturday, Nov. 4, the earliest Bedlam has been played in 13 years. It also means the rivalry game won’t be the regular-season finale for the two schools, something that’s only happened once in the last 12 meetings and three times in the last 18.

Before that it was 2004, on Oct. 30th – also the earliest scheduled meeting since 1998. It was the eighth game of the season for both schools, another nail biter, this time in Stillwater. The No. 2 Sooners triumphed 38-35 over (20) Oklahoma State.