Breaking down the 2021-22 CFP National Championship 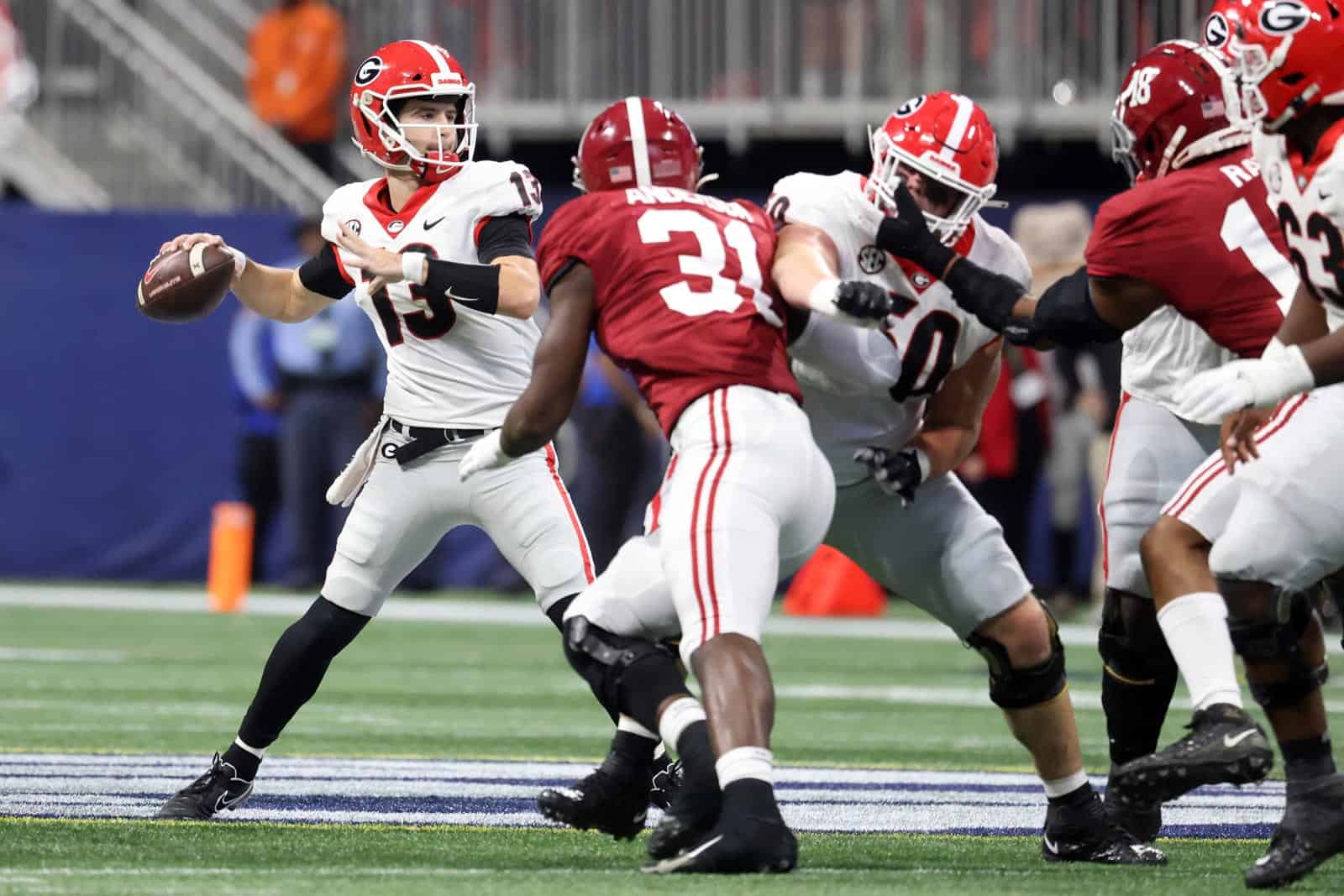 Whether you’re excited about the rematch title tilt between (1) Alabama and (3) Georgia or not, the eighth edition of the CFP National Championship is upon us.

Not only will we collectively – joined in front of screens spread across our great 50 states – crown a new college football champion…it’s the final game of the 2021 season.

It makes it a Monday evening worth celebrating with chicken wings, chips and dips, frosted donuts, and whatever best whets your whistle.

Enjoy! Indulge! Feast! Stay up until the wee hours of the night!

Friends…Do What’s in Your Heart!

For when the sun rises early on Tuesday morn it signals the beginning of another long, cold, college-football-less winter pockmarked with basketball, baseball, golf, and other stuff we like to watch but don’t live and breathe for.

Georgia has two claimed national championships but hasn’t won the whole enchilada since 1980. The only other title came during World War II, a 1942 campaign that included a 21-10 victory over then (3) Alabama during the regular season.

The common thread in both Georgia and Alabama’s singular losses in 2021 was allowing a significant number of additional points vs. the season average.

For the Bulldogs, owners and operators of the No. 1 scoring defense in America (9.6 points per game), it was allowing Alabama a whopping 41 points. That’s 31.4 points above the average and, rather than a shocking banner day for a struggling squad, right on par for a Tide offense averaging 41.4 points per game (No. 3 in the FBS). Compare it to the average of 7.25 points Georgia allowed its 12 other FBS foes in 2021.

What happened? Well, the Bulldogs, who had been giving up an average of 176.2 passing yards per game (No. 5 nationally), allowed a mind-blowing 421 air yards to the Tide. It was the second-most passing yards that Alabama posted on any opponent in 2021.

In as much as this might seem shocking, the numbers tell a different story. Not only was the Tide’s passing attack (ranked No. 8 nationally) the best Georgia faced all season – it was the only unit ranked in the top 40. On average, the Bulldogs’ other 12 foes rank No. 77 in passing yards per game, with six ranked in the bottom third of the nation.

Digging deeper, did you know that Georgia’s D is ranked No. 4 in the FBS in sacks, averaging 3.21 per game? It’s no coincidence that Alabama is the only opponent in 2021 that didn’t allow the Bulldogs a single sack.

Switching gears, the Crimson Tide – ranked No. 13 in the FBS in scoring D (19.2 points per game) – coughed up a season-high 41 points to a (25) Texas A&M offense averaging 29.3. Where Alabama gave up an average of 16.6 points to its 12 other FBS opponents, it spotted the Aggies what amounts to three additional touchdowns (plus two points).

What’s less obvious is why the Crimson Tide hiccupped vs. A&M defensively. Rather than a blaring anomaly in one major statistical category the Aggies’ season-high 41 points have more subtle origins.

First up, Alabama gave up just two kickoff returns of over 40 yards in 2021 with only one resulting in a touchdown – a 96 yarder in the third quarter of the loss to, you guessed it, Texas A&M. Next, the same Tide D that gave up an average of 4.66 yards per play (No. 6 in the FBS) allowed the Aggies a season-high 6.53 yards per play. A&M racked up 16 plays resulting in 10-plus yards four of which were 25-plus yard pass plays.

The Aggies were also the only opponent in 2021 who the Tide didn’t manage to score a sack against. Other defensive season lows were the total number of tackles (54) and tackles for a loss (4). Compare that to Alabama’s season average of 8.14 tackles for a loss per game – the second most in the entire nation.

Lastly, the A&M loss was the only game where the Tide suffered more than one turnover in 2021 – a fumble in the first quarter that led to an Aggie touchdown and an interception early in the second quarter on a third-and-goal play from A&M’s one yard line. Combined, the two swung the score by, at minimum, ten points in ten minutes.

Other than an inability to stop the Tide from scoring, the other statistical irregularity associated with Georgia’s loss to Alabama were season-lows in offensive production. First was managing a mere 24 points – the lowest output of 2021 and 15 points fewer than the average of 39 (No. 9 in the FBS). Then there was posting a mere 109 rushing yards, another season-low and 86 yards fewer than the 194-yard average. It’s a significant difference for an offense that has been more successful on the ground (No. 31 in the FBS) than through the air (No. 49).

As for the Tide, its offense scored a healthy 38 points in the loss to Texas A&M, just 3.4 points off their season average. It’s an impressive feat given that the Aggies – at No. 3 nationally in scoring – were the second-best scoring D (after Georgia at No. 1) that Alabama faced all season. The only opponents that managed to hold the Tide to fewer points in 2021 were Auburn (No. 27 in scoring D) which limited them to 24, LSU (No. 54 in scoring D) which allowed a season-low 20 and (4) Cincinnati (No. 5 in scoring D) which gave up 27. It’s no coincidence that Auburn (24-22) and LSU (20-14) were also the two narrowest victories for the Tide this season.

It all adds up to a few very simplistic, but statistically backed, keys to victory.

Georgia: senior QB Stetson Bennett (#13) (No. 4 in the FBS in passer rating and No. 2 in yards per attempt), freshman TE Brock Bowers (#19) (tied for the fourth most receiving TDs in the FBS), senior DB Derion Kendrick (#11) (tied for the third most interceptions in the FBS)

Um the semifinals are uh, well this is (a bit) awkward

I think, had the COVID protocols been used, this year could have resulted in one of those matchups. If both teams from one semi were unable to play, I think the two teams in the other would have played for the title.

Strange quirk and I may not be entirely correct on that…