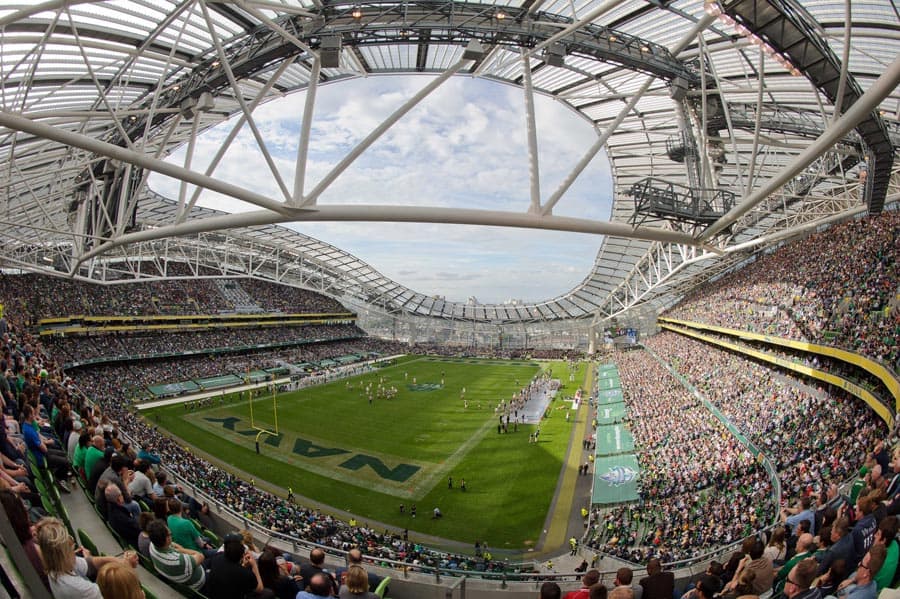 The Boston College Eagles and the Georgia Tech Yellow Jackets will open the 2016 season in Ireland, the two schools officially announced on Thursday.

Boston College and Georgia Tech will meet in the Aer Lingus College Football Classic at Aviva Stadium in Dublin on Saturday, Sept. 3, 2016. The game will be televised by ESPN2 at 12:30pm local time/7:30am ET (time is per ESPN).

Aviva Stadium, which seats 49,000 for American Football, played host to the “Emerald Isle Classic” in 2012 between Notre Dame and Navy. The Fighting Irish won that game 50-10 before a crowd of 48,820.

News of a possible Boston College-Georgia Tech matchup in Ireland began to surface in December. At that time, the game was rumored to be played at Croke Park.

The contest will count as an ACC home game for Boston College, which was slated to host Georgia Tech in Chestnut Hill.

To make way for the game, Georgia Tech pushed back their Sept. 3, 2016 home game against Mercer one week to Sept. 10. The wheels were set in motion for that move in November and finalized in April.

“I know the young men on our team will remember this experience for a lifetime, and I’m so excited for them,” BC head football coach Steve Addazio said. “They will get to explore a new country, be immersed in a new culture, and then play the first game on the opening Saturday of the college football season. It’s great that we will get to share this experience with our conference friends from Georgia Tech. In BC and Georgia Tech, you have two outstanding academic institutions with great football traditions, and we are grateful for the opportunity to showcase our programs in Ireland.”

“I’m excited for our guys to have the opportunity to experience playing in Ireland,” Georgia Tech head coach Paul Johnson said. “Our players really enjoyed it at Navy when we played in Dublin in 1996. It’ll be something they remember for the rest of their lives.”

Huh Don’t know how I feel about playing in other countries, and I’m Irish. But who knows may work out for better. Don’t know the reasoning or rational for playing oversees but oh well. Didn’t really like when NFL played there this past season and like it even less that it is two decent ACC teams. Glad it’s not my tigers. We would never give up a home game for that. Also don’t get why BC would give up a home game for that.. Does anyone know? Must be getting quite the paycheck.

BC has 7 home games in 2015, plus an 8th game close by at Fenway v. Notre Dame. BC has enough “extra” home games in a sense, as they rarely have to travel to get a decent OOC game. (Yes, I do realize they’ve committed to travel to DeKalb, IL the next two years.)

What is the benefit of playing there? Not really sure the expense is worth it and I don’t see it as a recruiting tool or expanding into a new market.

You know I was thinking the same thing. If I’m a fan of either school, I’m not making that trip.

I thought this game wasn’t happening! They just moved the venue. On well. Not sure of the Benefit for either team for playing this game overseas. As a Jackets fan, I’m glad they are not giving up a home game for this. Not sure many fans will be making this trip. Wish I could, I’ll be watching it @ 7:30 AM!!

If that is when it is.. I’ll be watching it too. More college football on the better. Was pumped for the way GT finished out last season, even tho they beat us. They have one hell of a qb, next season the ACC will definitely have the best group of QBs.

Not hard to figure this out at all! Somebody in Ireland’s Tourism
Office is clearly putting BIG dollars into these two schools’ coffers
to get them to come…..it fills a unique TV hole……..it attracts
potential Irish-American tourists (especially from Boston area)
and gives the players a very unique experience before the
semester gets too far along. The real question? Why is BC
playing Mercer……….ever?

Because GT likes playing a FCS team every year and they are an instate team. That’s my guess. I’m actually surprised they have not scheduled any games with Georgia State. Not sure that would be any better of a matchup.

The first game Tech ever played was a loss to Mercer. Nov, 1892. They didn’t play UGA until the next year. It was Tech’s first ever win.

NIU game still undecided as far as I know. BC doesn’t necessarily have to have a P5 opponent in 2016. It’s not required by the ACC until 2017.

I’d be ok with a Auburn vs Notre Dame matchup in Dublin to open the season. Ive always wanted to go to Ireland as I have Irish blood in me and this would give me reason to go. Im sure I could get a non-stop flight from Atlanta for that one. War Eagle!

War Eagle! Not a terrible idea. The AU Marching Band has flown over before for the biggest St. Patrick’s Day parade and a tour, so there’s some institutional memory for doing it. However, I’d love to see AU schedule a home-and-home with BC, and do it at Fenway, or Gillette. There’s a decent-sized New England/New York contingent of AU alumnni. And flights from Atlanta to Boston leave every hour.

I don;t have a problem with this at all. If the schools & conference can afford it is a nice little trip for the coaches, players & staff. Good for them

College football games played outside the United States always get good media coverage back home because of the novelty of the locale. It’ll be fun to watch a Saturday game at 7:30 in the morning!

My wife and I went last year to see Penn State vs. Central Florida in Dublin. Fantastic trip, people are friendly, food was awesome, scenery was phenomonal. Football game was awesome. Bring a sweater and a raincoat, and if you drive don’t drive on the right.

all you southerners making glib comments about BC playing an ACC regular season game in the Republic of Ireland are obviously not Irish catholic. this is a HUGE special event for the Boston College student body (90% Irish catholic when i attended BC) against Ga Tech (the ACC school having the most foreign students). it’ll take place in the home country of millions of Irish-American fans. the game will be a nice trip for both teams; in a beautiful country with friendly people who genuinely like Americans.