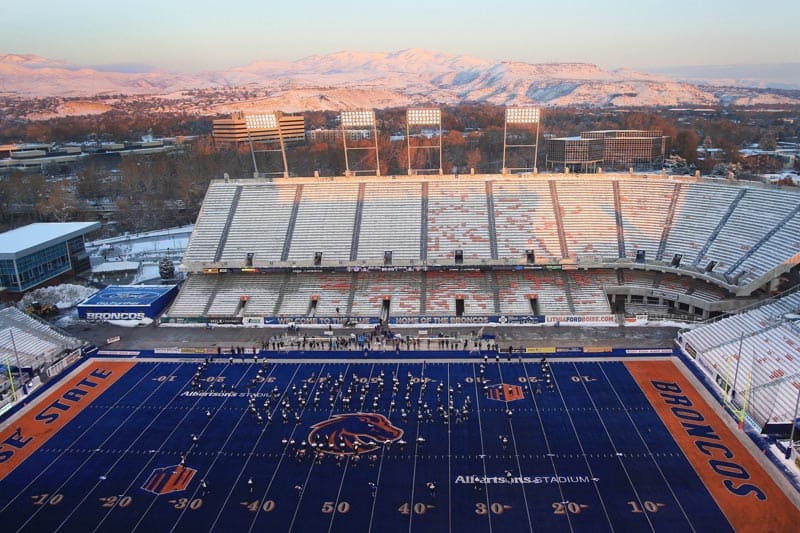 Oregon State will play on the blue turf in 2023. (Brian Losness-USA TODAY Sports)

The Boise State Broncos and the Oregon State Beavers have scheduled a home-and-home football series for 2022 and 2023, both schools announced today.

In the first game of the series, Oregon State will host Boise State at Reser Stadium in Corvallis on Sept. 3, 2022. The Beavers will then travel to face the Broncos at Albertsons Stadium in Boise on Sept. 2, 2023.

Oregon State and Boise State are already scheduled to meet in Corvallis on Sept. 24, 2016. That game is the second half of a home-and-home series that started in Boise in 2010.

The two schools have met eight times on the gridiron, most recently in the 2013 Hawaii Bowl where the Beavers came away with a 38-23 victory. Oregon State currently leads the series 5-3.

“Strength of schedule is obviously something that is extremely important under the new postseason structure of college football,” Boise State Director of Athletics Mark Coyle said. “Boise State has always made an attempt to schedule high-quality nonconference opponents, and we will continue that trend going forward.

“It is also our goal to schedule home-and-home series so that Bronco Nation gets the opportunity to see these types of games at Albertsons Stadium.”

Boise State now has three non-conference games scheduled for both the 2022 and 2023 seasons. The Broncos host BYU and Michigan State in 2022 and then travel to face them in 2023.

Boise State is the first announced non-conference opponent for Oregon State in 2022 and 2023.

Neutral site in 2019 isn’t happening for Boise. No school is going on the road 3 times OOC unless it’s desperate for cash.

Are there any future plans to upgrade Albertson stadium and expand the capacity beyond 36,800? It seems that would help attract top flight non league games besides Florida St on a home & basis.

Also any plans to upgrade the schedule by getting rid of the Louisiana/Lafayette game in 2016 or even worse the home & home with Troy in 2017 and 2018. Those teams have no attraction to Boise fans and do nothing for strength or schedule. Let the SEC feast on those patsies.

Last question, why doesn’t Boise ever schedule Pac12 teams besides the Washington & Oregon schools? Even for a 1 home, 2 away or neutral site game or even a one and done with the UCLA, USC, Arizona or Arizona St.

In regards to the last question. USC, UCLA and ASU have massive stadiums. Their profit margins aren’t going to be as high as bringing on a Fresno State, Virginia, or a New Mexico when you look at what Boise will charge vs. how many tickets they can sell. With few exceptions, when you see Boise play in a 50,000+ stadium, it’s because the game is organized by a third party and/or at a neutral site.

Besides, what recruiting benefit would going to the state of Arizona bring? Boise gets most of their players from California, Texas, Washington and Oregon. Why not play games in the states where the players’ families can come see them? They already have roughly one California game a year. If anything, they should being trying to get more games against Texas based teams.

If Boise wanted to play in the state of Arizona, they wouldn’t need to schedule ASU or Arizona, They can just win the Mountain West and get to the Fiesta. It’s a win-win!

Boise St has home-and-homes with ULL and Troy. Who do you propose as replacements for those home-and-homes? Are you going to pay big guarantees to FCS programs?

The reality is Boise St does not provide much attraction to most P5 programs. That is the payoff of winning a game in Boise St does not match that of losing a game in Boise St. The potential risk outweighs the potential reward. Certainly there are exceptions to the rule, but in general, as long as Boise St demands a home-and-home, most major P5 programs will not want to come to Boise. So if Boise St wants to continue bring major programs to grocery store stadium, it will be via 2-for-1 contracts. BYU is in the same situation. But the national perception is BYU is moving forward whereas Boise is taking a step back with Coach Petersen and TCU gone. Unless BSU receives in accidental invite to join the XII, the Bronco golden days can only be observed in the rear view mirror.

that is not the most positive response that I was hoping to read. it is getting weary beating up on the same MWC weaklings like UNLV, San Jose St. Wyoming, Hawaii and New Mexico.

What will it take to get Boise St. an invite to the Pac12 or Big12?

What will it take? About twice the academic standards they have now.

Actually, if you did a poll of BYU fans, the majority would tell you that they think their team never should’ve left the Mountain West.

Boise State getting an invite to the Big XII doesn’t seem as far-fetched as it might have a couple months ago. With TCU and Baylor getting snubbed by the playoff committee, the conference has to smarting and maybe thinking about expanding to 12 teams and adding a conference championship game. With 5 power conferences and 4 playoff spots, the Big XII as it is now is set up to be odd man out. And Boise didn’t exactly hurt their chances of being recruited with a third Fiesta Bowl win. If I was the Big XII I would be courting Boise and BYU.

Adding to previous comment, Boise State has been able to schedule series with some P5 programs (Florida St, Oklahoma St, Michigan St, Vrginia) because of the Broncos earned reputation as a top “mid-major” (since the dissolution of Big West Football Conference in 2000). If Boise St were able to effectively maintain this perception, then scheduling Boise St would continue to provide top P5 programs with a relative OOC SOS benefit.

But the problem is the relative strength of the MWC, with TCU, Utah and no longer in the conference, has diminshed and likely to remain so. Thus the SOS value of having Boise St on the schedule has decreased. So don’t expect many more of those marquee matchups to be played in Boise, at least as part of home-and-home contracts.

On the other hand the Broncos should continue to be in good enough position to schedule home-and-home series with the lower division P5 programs. But one-off neutral games will continue to be significant component of Boise St OOC schedules as they have been in the recent past (VT, Georgia, Ol Miss). As well as an annual BYU game.

With that said time, it’s for another Oregon-Boise St series, and for the Ducks to get over the 2009 debacle.

Should be “…with TCU, Utah and BYU no longer in the MWC conference”. And Virginia SIC.

Boise St has enough “market power” to attract smaller market P12 & XII programs to play home-and-homes in Boise. However the problem is the P12 & XII 9-game conference schedules provides for only three OOC games. And some of those programs already have annual OOC rivalries (Iowa St-Iowa, Utah-BYU, Colorado-Colo St) so getting those programs on the schedule is more difficult.

In the near term, the Broncos have a Hawaii exemption in 2016, and both Arizona and Texas Tech have a 2016 opening. And Kansas St has openings in both 2016 & 2017 and Snyder likes to keep his OOC schedule relatively “manageable”.

Texas A&M cancelled the 2016-17 series with Oregon so the Ducks have openings both seasons, But the Ducks need a P5 OOC opponent. However an Oregon-Boise St series in 2020-21 is a possibility.

You bring up excellent points Ricky… The fact is the MWC lost a lot when TCU, Utah and BYU bolted, and maybe they’ll never recover from that blow… With that being said the MWC is the arguably the best of the G5 conferences and BSU is arguably the best and most attractive team out of all the mid-majors… and also arguably better than most bottom tier programs in major conferences… My point is, that a OOC game vs. BSU for a P5 team will bolster their strength of schedule as long as BSU remains competitive…

I understand a win over BSU will not look as good as a win over, say Florida State, but it will look good. BSU needs to worry and take care of what they can control and if they do that they’ll probably emerge as a great opponent for a OOC game for any team in the country.

A series with Oregon will have to wait until maybe ’19 & ’20 as both the Ducks and Broncos have already filled up their OOC slots unit 2019, regardless, if agreed upon, that’ll be a great series for the Broncos…

But with that exemption in 2016 that the Broncos have, maybe they can perhaps schedule a marquee neutral site game for the right amount of money….

I really do think that Boise State could do better (strength of schedule) if they moved away from MW & became Independent!! We all know ESPN would for sure give them a handy TV deal… Plus we know they won’t do…

Im pro independence too. Thing is that’ll it’ll still be hard to get quality opponents for home-home series… It’ll be just as hard as it is today with the added difficulty of needing to fill out an entire schedule!!!

I still think BSU could score series with the Indiana’s, Illinois’s, Iowa State’s and Louisville’s of the world. Plus the higher tier non-P5 teams will also schedule BSU… I believe it should be something to consider if BSU ends up not getting the coveted P5 invite.

There’s no chance ESPN gives them a TV deal. The Idaho is much smaller than what ESPN usually does deals for. Teams like Texas or BYU have national followings, the kind of which unfortunately, the Broncos don’t have.

If not for a TV deal, why would going independent be worthwhile? Even Notre Dame needs a partnership with a conference in order to fill out their schedule.