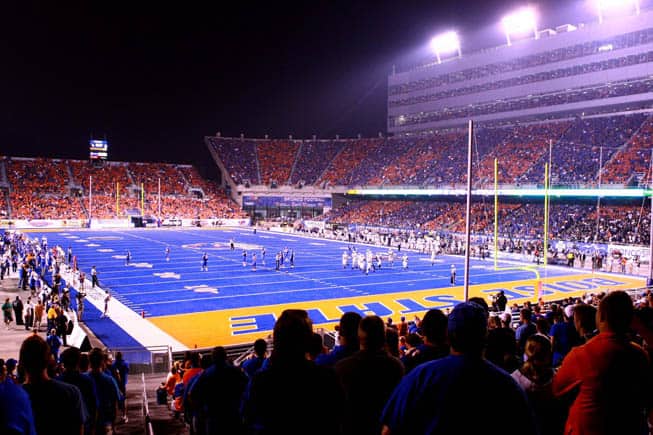 The Boise State Broncos and the Cincinnati Bearcats have scheduled a home-and-home football series for 2019 and 2020, both schools announced today.

Boise State will host the first game of the series at Bronco Stadium on Sept. 21, 2019. In the second and final game, the Broncos will travel to face the Bearcats at Nippert Stadium in Cincinnati on Sept. 26, 2020.

Barring a future meeting in the postseason, the 2019 contest will be the first ever meeting on the football field between Boise State and Cincinnati.

“We’re thrilled to add another home-and-home series against a high-quality opponent like Cincinnati to our schedule,” BSU Director of Athletics Mark Coyle said. “With Florida State and BYU also on the schedule in 2019 and 2020, Bronco Nation is going to have the opportunity to watch some great football.

The addition of Cincinnati gives the Broncos another challenge on their future non-conference slate. In addition to BYU and Florida State, Boise State also has home-and-home series set against Connecticut, Michigan State, Virginia, and Washington State.

Boise State also announced today that they have added Idaho State to their 2015 football schedule. Boise will host the Bengals on Sept. 19, 2015.

Cincinnati now has three non-conference games set for 2019 and four in 2020. In 2019, the Bearcats are slated to travel to Ohio State, Miami (OH), and Boise State.

Their 2020 schedule, which is tentatively complete, features Boise State and Miami (OH) at home and Nebraska and Ohio on the road.

Good game. Im a little disappointed in the 2015 game vs Idaho State, but I guess BSU had it really hard to find some good team to travel to Boise in 2015 and then BSU return the trip a few years down the road.

As far as 2019 and 2020 go, it looks like an impressive non-conference slate. It’ll be nice to schedule now a Big XII team willing to do a home and home with the first stop being in Boise. Texas Tech could be a nice one.

They have a home and home with Oklahoma State coming up.

Glad to see BYU, Boise State, Cincinnati and UConn scheduling lots of games with each other as four of the top Have Nots. Strangely, Virginia also loves the group even though it has an AQ to top bowls through the ACC. Would love to see UCF schedule against this bunch. NIU, unfortunately, loves bodybag games at Nebraska and Iowa instead of home-and-homes against this groups but otherwise would make a good opponent for this gang.

This is about as good as your going to see Boise schedule non league games any more. When you play in crappy league (Mountain West) that went 1-20 in 2013 against BCS teams, it is difficult to get good teams to agree to come to Boise and play in their tiny little stadium. With really good BCS teams Oklahoma State, Florida State and Michigan State schedule between 2020-2022 in Boise there is something to look forward to. The odds that all 3 will make the trip is really quite low as any of them can exercise a $1,000,000 dollar buy out after Boise first plays @ their place. For teams with deep pockets like those three, the odds of that happening are strong. They will simply cancel the return game @ Boise, pay them off and schedule a cupcake @ home like Boise did in 2015 with Idaho State or with UT Martin whom Boise brought in this year. Boise has future home & homes with 2 Sunbelt schools in UL/Lafayette and Troy coming up so their philosophy of no more than 2 difficult out of conference games has not changed. Boise has only one season, 2016 where they play 2 BCS conference teams and those are both from the PAC 12 in Oregon State and Washington State-certainly not in the elite of the PAC 12. Their future schedule includes UConn and Virginia-both weaklings in their respective conferences. Boise will no longer schedule one and done games against the elite teams like they did in 2010 and 2011 against Virginia Tech and Georgia, go to their stadiums and win. That was a once in a generation team, the likes of which Boise is not likely to see for the next several years. Boise season ticket sales declined by nearly 10% in 2013 from the previous year and were unable to sell out a single game in 2013 even with $10 single ticket game promotions. This a clear sign that Boise will not be to expanding their stadium and their prospect for moving to meaningful conference, PAC 12 or Big 12 is remote to say the least. Boise fans are having difficulty in accepting that prospect, that Macco bowls against PAC 12 mid level teams or MAC and Sun Belt bowl opponents are their future bowl opportunities . Pre Christmas bowls in half empty stadiums arranged by ESPN are as good as it will be.

Bob, I do understand what you are saying. First of All, BSU did an excellent job to beat several big boys in the past. Secondly, BSU have tried to get into PAC 12 and Big 12 but they won’t allow them for some reason. It is not fair to any little boys because they don’t earn a lot of money in BCS Bowl because they did not meet the requirement standard for example the little boys must win all games and undefeated team so that way they can get into BCS Bowl. Utah, BSU and TCU did so well in BCS Bowl. Now not anymore the big boys have easy job because the format was written by founder of BCS. It is kinda sad because there are many good footbal players to make the pro. They are smart because they knew they won’t able to play starter look what happened to USC Quarterback Leinhart while the back up Quarterback Cassel has been playing more games than Leinhart and still playing in NFL.

It is the same old story. The rich gets richer. Just like the widening gap between the 1 per cent and the other 99.