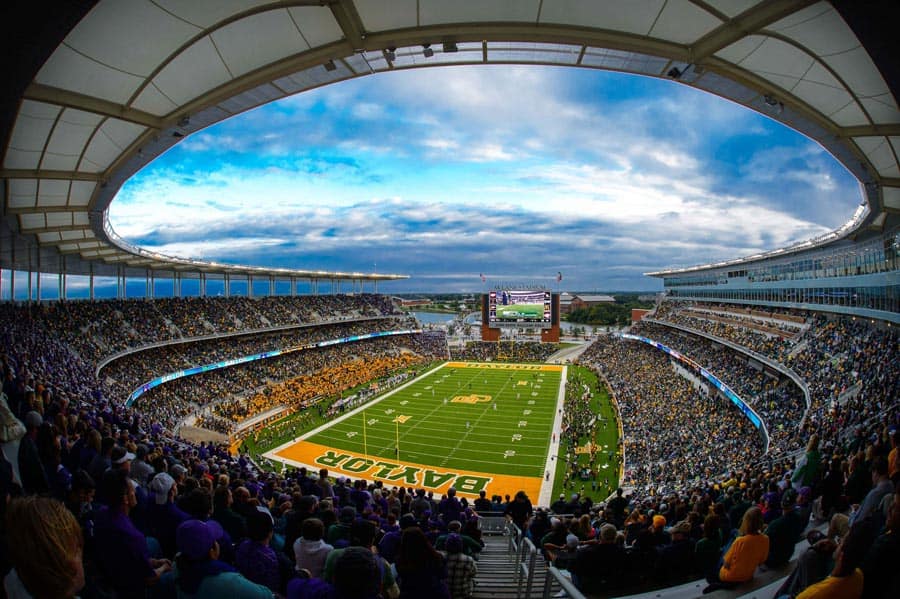 The Baylor Bears and the Texas State Bobcats have scheduled a three-game football series for 2021 through 2023, Baylor’s 2015 media guide indicates.

Baylor will host the first game of the series at McLane Stadium in Waco on Sept. 18, 2021. The Bobcats will then host the second game at Bobcat Stadium in San Marcos on Sept. 17, 2022.

The third and final game of the series will be played in Waco on Sept. 2, 2023, which will be the season-opener for both schools.

Baylor and Texas State have met seven times on the gridiron, but in each game the Bobcats were a member of the FCS. Baylor won all seven meetings and each were in Waco. The last two contests in 2004 and 2007 were decided by only seven points each.

Texas State moved up to the Football Bowl Subdivision in 2012. After two years in the WAC, the Bobcats joined the Sun Belt Conference.

Texas State also has two non-conference games on the docket for the same three seasons. The Bobcats are scheduled to visit UTSA in 2021, host UTSA in 2022, and travel to UTSA again in 2023.

Baylor has also pushed back their future game against the Incarnate Word Cardinals. The game was previously set for Aug. 31, 2019, but is now scheduled for Sept. 5, 2020.

Baylor’s postponement of the 2019 UIW game, which was a season-opener, clears the way for them to open the season against Arkansas in Houston. Art Briles mentioned the possibly of that matchup last month at the a Houston Touchdown Club luncheon.

Ian McCaw, Baylor’s Director of Athletics, told David Smoak of 1660ESPN on Tuesday that they are discussing a neutral site game with an SEC team.

“We really are working hard right now on trying to lock down a neutral-site game against an SEC opponent in 2020,” McCaw said. “That’s something we are spending most of our scheduling energy on right now, and hopefully we will be able to bring that to fruition in the near future.”

McCaw also said that the game would be in the State of Texas.

If that materializes, the Incarnate Word game would likely be moved again, either to the 3rd or 4th week in 2020 or to a later season.

Way to beef up the schedule Baylor. Just what the committee is looking for.

Shut the hell up! TexasStateUni is a great stuff ,making strides in football. Won’t be surprised if by 2020 gives the bears a run for their money. You guys have only been up the last couple of years. Don’t forget your history of old. There’s a reason people chanted worse than baylor!

Well, here’s hoping that last slot for 2019-2022 is used wisely. I know there’s talk of a neutral site matchup, but how much better would it be if they scheduled 2 home/home series with middle-or-better power-5 teams? You have that fancy new stadium! Why not show it off? I mean, ok, some teams might think it’s more attractive to travel to Houston/Arlington/San Antonio, but Waco is still in the (recruit-heavy) state of Texas, and plenty of college towns are smaller and in the middle of nowhere. It can’t be that tough to make this happen.

Shoot for Cal or Stanford or the Arizona schools or Iowa or Minnesota or Virginia Tech or Pitt or Louisville or Missouri or South Carolina or the Mississippi schools… or heck, play an early season game agains Oregon or USC or Florida State or Clemson or Ohio State or whatever. Let’s be honest, if you win one of those kinds of games you’re on the fast track to the playoffs, and if you lose one but are good enough to win out, that kind of loss is forgiven, especially if it was early in the season.

Baylor the king of garbage scheduling.

Where is the thumbs up button

Despite this season, it’s our time to shine. EatemUp Go Cats Go!

I don’t understand you Baylor people a couple of good seasons and suddenly you’re too good for people? People used to chant “Worse than Baylor!” does that not humble yall a little bit?? Texas State is a program on the rise smack dab in central Texas. By 2021 the 500million dollars that are in the works for upgrading all the BobcatFacilities as well as building a 120million dollar new engineering building. Y’all know Texas State is the 4th largest university in Texas? Behind only UT, A&M, and UH? Texas State expects to get to 45,000 students in 10 years. Currently sitting on 38,000. San Marcos is also the fastes growing city in the country. By 2021 Texas State will be more than just a worthy opponent, it’ll be one you guys will have to prepare for! Not to mention it’s a good opportunity for you guys to try get some t-shirt fans away from the longhorns who are only 20 minutes away. That’ll be 2 games y’all play in their vicinity! Damn it use your brains before you speak! Most of yall went to Baylor so act like you can think critically. We’re college educated!

I think people are giving way too much credit to a school that “may” be more in five years than they are now. I just don’t see the SBC growing in stature in upcoming years. Conference USA and the SBC are basically irrelevant in the college football world right now.

So Baylor has yet to do anything to really raise their stature. They are taking the K St. approach and hoping for an unbeaten season. It’s their only hope.

Art Briles just doesn’t seem to want to take on any of the big boys.

Wow, and I will win the lottery bu 2020 because I am buying more lottery tickets. Typical Baylor thinking.

Baylor will suck by then. Poor scheduling by Texas State.

If the inevitable decline for Baylor takes hold then Baylor just cancel this series and add moreIncarnate Word or Little Sisters of the Poor. Baylor, your time in the sun is rapidly coming to end and another 30 years of irrelevancy awaits you.

Baylor (Briles) has scheduled horribly in the past, but it looks like the AD is trying to rectify that, adding home-and-homes with Utah and Duke as well as scheduling the neutral field game with Arkansas.

Any update on the potential Cal-Baylor game in Australia for 2016? In June it was said the idea was dead. But in July, it was reported the game is still in discussion.

With the recently announced Arkansas game, Baylor’s OOC schedule for 2019 will not have a FCS program on it. And Baylor still has OOC slots open for 2020-22. Don’t be surprised if a P5 shows up the schedule for every one of those seasons..

If the Cal game happens it is likely Baylor will end up with a P5 OOC game on its schedule every season onward.

But for 2015, even if the Bears go undefeated I don’t see how their OOC schedule (SMU-Rice-Lamar) will benefit the Bears. Unless so many other teams falter, the Bears will not be deserving of a playoff spot.

This is Baylor’s time to shine, new stadium on the water, Texas & Oklahoma are down right now, high speed offense, let them enjoy this! Not sure what will happen once the BIG-12 gets good again but since Nebraska has left it has not been the same.

As far as Baylor’s time to shine, we’ll see what TCU has to say about that. Horned Frogs with home field advantage. And the K-State game is on Snyder’s Field.

I thought it was a joke when I heard about Incarnate Word. The problem is that Briles’ ego is involved. He repeatedly claimed that a big 12 title is all a school needs to make the final 4 and even though that’s been disproven, he refuses to add a Cal, Tennessee, Stanford, Oregon, VaTech, Arkansas, ole miss – some solid team. Only having 3 nonconf (vs title game confs having 4) hurts, but it’s gotta be done. During the SWC days in 80s and early 90s, BU played Nebraska, OU and UGa that I recall. I recall JJ Joe and Melvin Bonner having a great game against GaTech for a BU win in 92.
It is funny that people who clearly know nothing about college football talk about BU “going back to being the worst team in college football” as if they occupied that spot for decades. BU was the worst team in college football for 3 yrs. Morriss came in and cleaned up the mess – and it was a disaster – Steele left. He just couldn’t quite get the team over the hump in ’06. Briles took over a well-run program. While Morriss wishes he’d stayed at Kentucky, BU fans appreciate what he did.