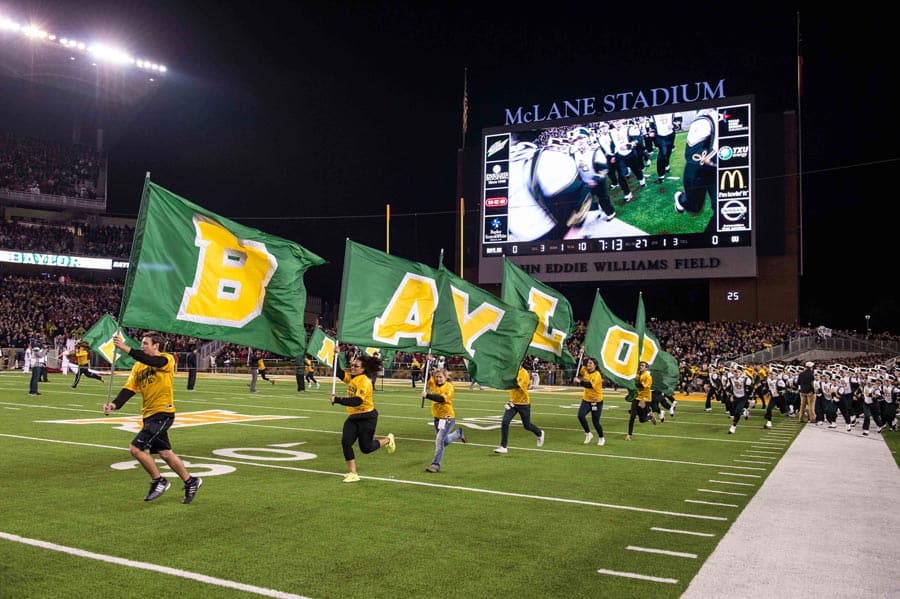 The Baylor Bears and the BYU Cougars have scheduled a home-and-home football series for 2021 and 2022, both schools announced today.

In the first game of the series, Baylor will host BYU at McLane Stadium in Waco in 2021. The Bears will then travel to face the Cougars at LaVell Edwards Stadium in Provo in 2022.

Baylor and BYU previously met in a home-and-home football series back in 1983 (Waco) and 1984 (Provo). The two schools split the series with Baylor winning the first game 40-36 and BYU evening the series with a 47-13 victory.

“We are excited to set a home and home series with a tradition-rich, faith-based football program like BYU,” Baylor Director of Athletics Ian McCaw said. “This will be another strength of schedule enhancement and a high quality intersectional game that will be appealing to television and the fans of both programs.”

In both 2021 and 2022, BYU has been approved by Big 12 commissioner Bob Bowlsby as an opponent that will satisfy their Power Five non-conference scheduling mandate.

“We are excited to have Baylor on our schedule again,” said BYU Director of Athletics Tom Holmoe. “The last series between the two schools featured two legendary hall of fame coaches in LaVell Edwards and Grant Teaff. Baylor is an exceptional football program and it’s great to see the two schools competing again.”

In 2022, BYU is also scheduled to face Oregon, USF, Boise State, and Stanford.

Yep BYU isn’t ND but they are the best independent in the West and I have always considered them a P5 program. So that’s good news for their school that every conference is treating them like a P5…

I assumed that Baylor and BYU would play–Baylor needing to beef up their schedule and BYU needing teams. Glad that it’s now in writing.

Love it! Been wanting this game for a while!

The Baylor-Texas Tech game must be moving back to campus. Otherwise, Baylor will only have five home games in 2023.

BYU should join the Big 12 yes, but they’d still compete as a football independent through 2020. I’m projecting Boise State, Memphis, Houston, Temple and SMU also joining the Big 12 soon, with the American schools beginning Big 12 football competition right away and the Western schools playing a few seasons as football independents until moving into Big 12 football in 2021, at which point BYU’s scheduled games against Boise State and Baylor get absorbed into that season’s conference schedule. Granted, one other 2021 game for BYU will have to be moved to like 2023 due to the move to a 9-game conference schedule, but BYU will get used to the Big 12.

Several of the BYU future football series have outs if they join a P5 conference. I don’t recall which ones were revealed through FOIA requests–but there were at least a few.

That would be great but I don’t see the B12 expanding west. I think BYU should try to get an agreement to ply 3 games per year against the P 12 and B 12. That would give them 6 games, the make another agreement with Notre Dame for a season ending game every year when the other conferences are playing their CCG. They can fill in the other five games against quality opponents and have a strong SOS every year. That would make them more attractive to bowl games and the CFB play offs. I don’t see them joining the MWC or the AAC.

The Big 12 needs to just add BYU and Cincinnati already and this can be a conference game.

A good series for both programs.

I hope beginning this year the playoff committee starts taking the 10 game regular season games with P5 teams into consideration as well as the CCG, meaning 11 games for the teams in the CCG..

Tully even though you are right about 10 power 5 games for the Big’s, you fail to mention that the SEC and ACC require members to play at least one OOC Power 5 opponent. Was this an over site or just a hater trying to dis the SEC? I wish the SEC would move to a 9 game schedule but even if they don’t the strength of schedule for the SEC dwarfs most others year in and year out. Alabama. Auburn, Florida and LSU can also claim something that only 2 others (FSU and TOSU) can claim over the past 10 years. How many national titles have the Pac 12 and Big 12 won? ZERO

The ACC and SEC have 8 game regular seasons, and now are moving to require one OOC game with a P5 team. In 2016 5 teams in the ACC and one team in the SEC will play 10 games with P5 teams. In the ACC chances are the teams which could make a playoff run are among those five. Boston College will only play 8 games with P5 teams.

The NCAA is not going to mandate how conferences schedule,

Given we are talking about independents, and conference with 10, 12 and 14 teams I am suggesting the Playoff Committee use the 10 games with P5 teams in the regular season as a factor, just the same way they should factor in the Big 12 and ND fo not play a CCG. In fact the Big 12 has an extra bye week for 4-6 teams a year. That extra bye week can be an advantage and not playing a 13th game in 14 weeks is also a an advantage. Chances are the conference champions of the ACC, Big 10 and PAC 12 will play 11 games with P5 teams including the CCG.

I do see a 9 game schedule with P5 teams as having an extra bye week. Especially if every year 3 of the four OOC games are all home games with non P5 teams, you know “payoff games”.

The different conferences are going to do what works best for each conference, I think a better question when looking at the playoffs is which programs are not playing at least 10 regular season games with P5 teams. (11 counting CCGS)

Baylor’s OOC scheduling has been been mocked for several years and rightfully so.They are not adding OOC games with P5 teams because they want to. The trend is forcing that change.

It is very possible as soon as 2017 less than 20 teams will play less than 10 regular season games with P5 teams.

If I am on the playoff committee and the teams from my conference played 11 games including the CCG with P5 teams, yeah I am going to make that an issue compared to teams which only played 10.

Blah Blah Blah count the Banners. Baylor plays chumps, they do not have any. Alabama. Florida, Auburn and LSU play each other, have many, Beat the SEC then talk all the crap you want Tully Ohio St and FSU are the only dogs in this fight as they have beaten SEC teams in games that count

Ryan should we start counting teams like Houston, Cincinnati, BYU as Power 5? I don’t know the answer but it is a fair question. In some seasons Memphis, Bowling Green, Northern Illinois, etc. are solid teams. How do you gauge who is worthy? Any of those schools I typed are better than Maryland, Rutgers. Wake Forest, Illinois and Vanderbilt on a year to year basis. So tell me your plan

Are we sure this isn’t a fledgling BYU-Hawai’i football team that Baylor is scheduling??

Ha ha ha! Or, may be the real announcement lost in the shuffle is that there will be a new BYU-Nauvoo University.

Baylor thought they were signing up Incarnate Word/Utah. Baylor will never be in the national playoff picture.

Have any game dates leaked out on this?