Battle at Bristol to be televised in primetime by ABC 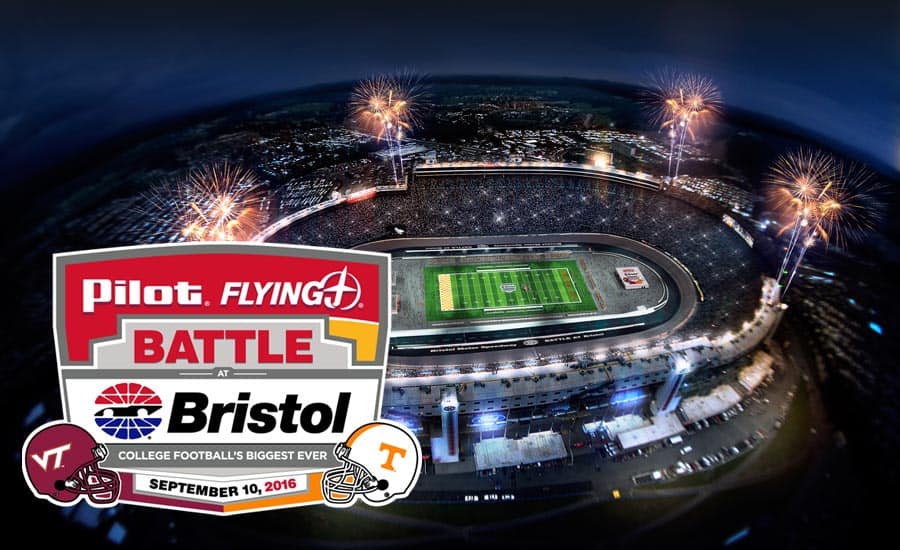 The Battle at Bristol between the Tennessee Volunteers and the Virginia Tech Hokies will be televised in primetime at 8:00pm ET on ABC, several outlets reported on Wednesday.

The UT-Virginia Tech game Sept. 10 at Bristol Motor Spedway will be on ABC in prime time, with kickoff about 8 pm

The matchup, officially dubbed the Pilot Flying J Battle at Bristol, is set for Saturday, Sept. 10, 2016 at Bristol Motor Speedway in Bristol, Tennessee. Organizers of the event hope to create the largest crowd ever to watch a college football game, perhaps 150,000 or more.

Bristol Motor Speedway is a NASCAR short track that opened back in 1961. Tennessee-Virginia Tech will be the first football game at Bristol since an NFL preseason game between Philadelphia and Washington in 1961.

The gridiron on the infield of Bristol Motor Speedway will hang around the following week to host another college football game. On Sept. 17, the East Tennessee State Buccaneers will host the Western Carolina Catamounts in an event dubbed the Bucs at Bristol.

Tennessee is set to open the 2016 season with a primetime matchup at home against the Appalachian State Mountaineers on Thursday, Sept. 1. The game will be televised by the SEC Network at 7:30pm ET.

Virginia Tech opens the 2016 season at home against the Liberty Flames, also on Saturday, Sept. 3. The game is set for a 12:30pm ET start on the ACC Network.

My man Hermie Sadler should get a sideline gig here!

Just another SEC team finding a patsy ooc schedule.
Come on SEC haters turn it on.

Well, if you insist

It’s funny that, even when no “haters” have mentioned anything, SEC fans still whine about them. It’s really simple: play two decent teams (or one decent team if you ever go to 9 conf games), don’t play scrubs in October/November, go on the road occasionally. That’s what most everyone else does.

So when ohio state had virginia tech as the only even half way decent team on their schedule a couple years ago it was scheduling up?….but its just another cupcake when tennessee plays them on a neutral site?

Hopefully they can pack the house & turn this into a regular game site for all teams to visit.

nearby AQ schools – Kentucky, West Virginia, Clemson. UNC/Duke/Wake/NCSt not that far. Clemson is the only one within 200 miles though

Number of schools in that list that could actually draw at least 1/4th of that attendance – 1, Clemson.

Drew, ask Michigan how it felt to play Appy State?
List us your team and conf schedule.

I was at that game, got free tickets from work. UM looked real good, and then proceeded to get shut out at Notre Dame in their next game and finish the season 5-7. You left that part out.

So this is the best game ABC can come up with, 2 middle of the pack teams in their own conferences?

Prime time sucks. They got many hotel rooms nearby? Traffic is going to be a bear getting 150,000 fans out of there after midnight.

They do it all the time after a NASCAR night race at Bristol. For a football game, there will be a lot more busses and charters though.

TENNESSEE HOME GAMES AT BRISTOL MOTOR SPEEDWAY THAT WILL BE COOL