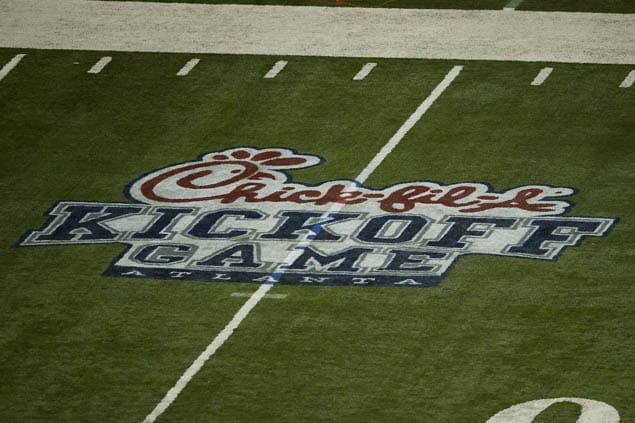 Auburn and Louisville will meet in Atlanta in 2015. (Paul Abell-USA TODAY Sports)

The Auburn Tigers will face the Louisville Cardinals in the 2015 Chick-fil-A Kickoff Game, both schools officially announced this afternoon.

Auburn and Louisville will meet at the Georgia Dome in Atlanta on Saturday, Sept. 5, 2015. The game will be only the second ever meeting between the two schools. Auburn won the first game 16-3 in Birmingham back in 1974.

“Louisville and Auburn represent two great football brands with incredible fan bases and a tradition of winning,” said Gary Stokan, Chick-fil-A Bowl president and CEO. “The ACC vs. SEC is a tremendous rivalry that has proven to be a recipe for sellouts, high TV ratings and close, competitive games.”

“It will be a great opportunity for us to play on a national stage to kick off the college football season against a very good Louisville program,” said Auburn coach Gus Malzahn. “We love playing in Atlanta at the Georgia Dome in front of our fans who live in the area or who can make the short drive to see Auburn play in a first-class event.”

“The Chick-fil-A Kickoff Game has an outstanding tradition of putting together great match-ups, and facing Auburn in this type of event is great for our program and university,” UofL head coach Charlie Strong said. “We look forward to opening the 2015 season against a great SEC opponent like Auburn.”

The 2015 contest will mark the first appearance for Louisville and second for Auburn in the Chick-fil-A Kickoff Game. Auburn fell to Clemson 26-19 last season.

Listed below is the complete schedule of Chick-fil-A Kickoff Games scheduled through 2015:

Louisville, which joins the ACC in 2014, only has one other non-conference game slated for 2015 — a trip to in-state rival Kentucky on Nov. 28.

Are the Chick-Fil-A Reps still working on a Clemson-UGA trilogy for 2015. I would like to open up with them every year for old time sake. Vince Dooley stopped the rivalry once we started beating them on a regular basis.

Auburn should win by Double Digits in this one

How you figure its a year from now?

Louisville’s on the decline