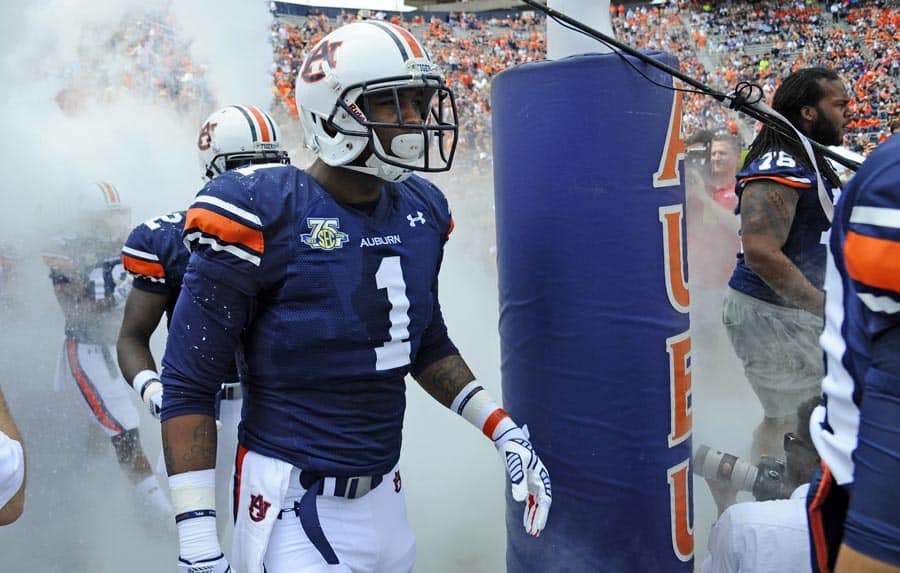 The Auburn Tigers have added the Alabama State Hornets to their 2018 football schedule, the school announced on Saturday.

Auburn will host Alabama State at Jordan-Hare Stadium on Nov. 17, 2018. The game will be the first-ever meeting between the two schools.

Auburn noted in their release today that the addition of Alabama State to their future schedule extends their “commitment to playing all current FCS schools in the state.”

Alabama State is a member of the Southwestern Athletic Conference (SWAC) in the Football Championship Subdivision. The Hornets finished the 2014 season 7-5 overall and 5-4 in conference play.

“We are pleased to announce our future football matchup with Auburn,” ASU Interim Athletic Director Melvin Hines said. “The Alabama State football brand continues to grow and expand where we are able to schedule games of this magnitude. We look forward to the contest in 2018.”

Well if Auburn is going to play a FCS school might as well keep the money in state, no complaints there.

It’s interesting that Auburn manages to play ever I-AA team in Alabama and the region and every team in the Sun Belt Conference (but Troy) and other similar conferences, but never finds a spot for Troy, only a hour away. Alabama: Same story.

I’ve heard Coach Blakeney say he did not want to play AU or UA. His reasoning was that you could be an Auburn or Alabama fan and still be a Troy fan but if they ever played that would end. I wish AU would play Troy or South Alabama rather than ULM every year or so it seems.

Alabama on the other hand has never play South Alabama, UAB, Troy, Alabama A&M, Alabama State, Jacksonville State. They last play an in state school other than Auburn in 1944 when they played Samford (know as Howard at that time). They also played Spring Hill College in 1940. They played Birmingham Southern 12 times but the last was in 1925. If Auburn was not in the SEC they wouldn’t play them either. The Alabama State Legislature had to force them to renew the series with Auburn in 1948.

Auburn and Alabama don’t want any money/resources going to UAB or Troy.

Not hardly. Where do you think Troy got Coach Larry Blakeney from, along with a lot of re-directed recruits that weren’t going to make AU due to academics, or less potential? Troy is lucky as heck that Blakeney’s misdeeds at AU didn’t end up scorching him at Troy.

And unlike UAT, Auburn *has* played UAB.

SEC still the coward conference unwilling to play 9 conf games while stocking up on FCS schools.

The champions of the ACC and SEC face just as many conference opponents each year as the XII. And since that 9th game in the ACC and SEC is against the second best team in the league… it’s a tougher schedule than the XII that has “co-champions”.

I’m assuming schoup is a B12 or P12 fan since he keeps harping about the “cowardice” of conferences not playing a 9 game schedule. What he fails to realize is that, even if these “cowardly” conferences were to go to 9 game schedules, they’d still schedule FCS schools. For instance: in 2015, 8 schools in each of the Big 12 and Pac-12 have an FCS matchup. In 2016, it is 7 and 9 respectively.
So, is schoup just an angry hater that enjoys insulting others or simply ignorant?
Either way, this person needs to take a look in the mirror before they spread hate.