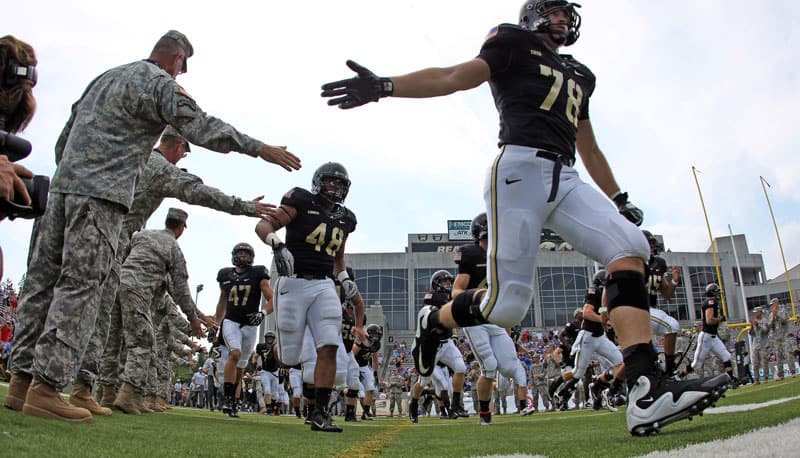 The Army Black Knights have officially announced their 2015 football schedule.

Army opens the 2015 season on Sept. 5 against the Fordham Rams at Michie Stadium in West Point, New York.

The Black Knights then travel to face UConn in their first road game of the season on Sept. 12 before returning home to take on Wake Forest on Sept. 19.

Next up are back-to-back road trips to Eastern Michigan (Sept. 26) and Penn State (Oct. 3) before consecutive games at home against Duke (Oct. 10) and Bucknell (Oct. 17).

Army then travels to Rice on Oct. 24 before enjoying their first open date on Oct. 31.

The Black Knights’ first battle for the Commander in Chief’s Trophy is Nov. 7 at Air Force. Army then hosts Tulane on Nov. 14 before entertaining Rutgers at Yankee Stadium on Nov. 21.

After two open dates, the Black Knights head to Philadelphia for the 116th edition of the Army-Navy game (3pm ET, CBS).

All Army home games, plus the game vs. Rutgers at Yankee Stadium, will kickoff at either noon or 3:30pm ET and will be televised by CBS Sports Network.

Agree with wins over Fordham, EMU, and Bucknell

Evan, I agree, but I think Fordham will give Army a tougher game than Wake F.

BC schedule also shows NM State game, which reportedly has been cancelled.

Yes, appears BC game is off. BC-NM State haven’t been able to verify.

Tulane is not an FCS program. They’re in the american conference

Army beats Fordham, Bucknell, UConn, Tulane, and upsets Duke and Wake Forest? ,,, if they’d only beaten Eastern Michigan, maybe they would have gotten into the “I Don’t Care Bowl? ;)

Maybe Army should schedule Texas A&M at the Cowboys Classic in to 2016.

they need to go fcs

Let’s face the facts. Army cannot compete talent wise with many of the schools they schedule. Todays high school blue chip athletes have no desire to be in a demanding scholastic and military environment. Army would be better off scheduling more Ivy league schools. Play more teams like Bucknell. and E.Michigan.
The years of Coach Blaik are behind us.