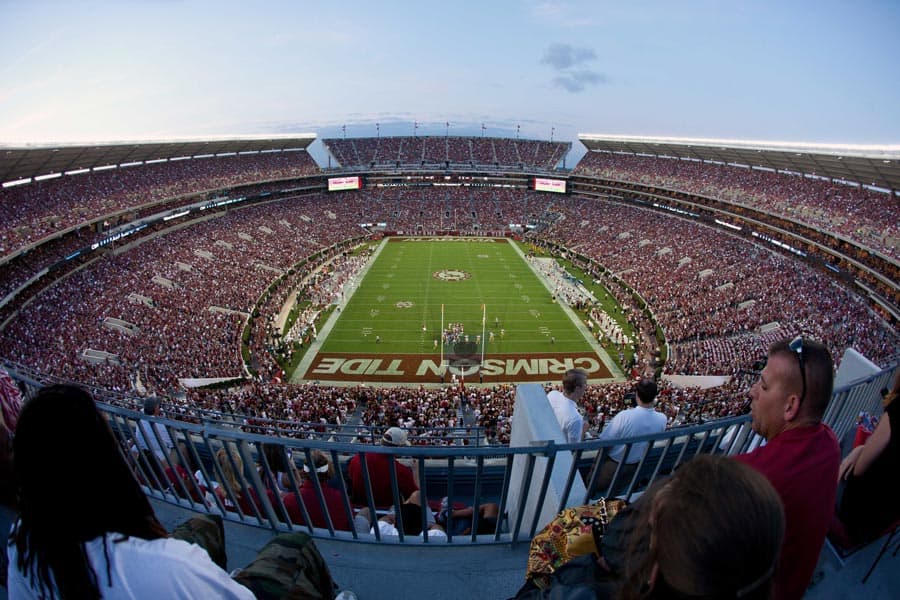 The Alabama Crimson Tide have added The Citadel Bulldogs to their 2018 football schedule, according to an announcement on Tuesday.

Alabama will host The Citadel at Bryant-Denny Stadium in Tuscaloosa on Nov. 17, 2018. The game will be the first ever meeting between the two schools.

The Citadel is a member of the Southern Conference in the Football Championship Subdivision (FCS). Last season, the Bulldogs finished 9-4 overall and made it to the quarterfinals of the FCS Playoffs. They also upset South Carolina 23-22 in Columbia.

“This is a fantastic opportunity for our program,” The Citadel head coach Brent Thompson said. “These games are important for many reasons, and they allow us to provide our cadet-athletes with once-in-a-lifetime experiences. I’m excited that our team will have the experience of playing in front of more than 100,000 fans against one of the premier teams in college football.”

Alabama now has three non-conference games scheduled for the 2018 season. The Crimson Tide open the season at Camping World Stadium in Orlando, Florida against the Louisville Cardinals and then host the Arkansas State Red Wolves in Tuscaloosa one week later.

In SEC play in 2018, Alabama is set to host Auburn, Mississippi State, Texas A&M, and Missouri and travel to Arkansas, LSU, Ole Miss, and Tennessee.

Yeah what a waste of time playing the citadel

We have zero chance of keeping it close but we have beaten Arkansas and USC
2 of the last 3 times we have played them.

A waste of time, yes. However, Citadel players are amazing young men who meet difficult academic requirements. Can Alabama match the academic and character requirements?
The Citadel isn’t a farm team for the NFL.

As a Bama boy from Dothan, and a grad from The Citadel, this is awesome. It will help out both schools. A chance for The Citadel to earn some money, and a teaching moment for the Bama players to see some great young men. Roll Tide, and Go Dogs!

The defending national champions have no business playing an FCS team from another state. Either support a local team or play an extra G5 team! This is indefensible.

I can agree with this. I would rather see Bama play Bama St/A&M, Jville St or Samford then play an out state team but I doubt that will ever happen. Would not mind if Bama would play Troy, USA or may be UAB in the future too.

This is why we need a weak team to play. Do you realize we have to play Iron Bowl a week after? Give those kids a break..

The only reason they are playing The Citadel is because Bemidji St. was unable to clear their schedule that week.

There goes that dream match up against Idaho!!

SEC haters, we have to schedule cupcakes to keep having the most players drafted by the NFL (51) this year and so we can win more national Championships.
Now tell us how your teams and their conferences do it!!!!!

You do realize that ESPN forgot to mention that most of those picks came after the 3 round?
The best players got selected in the beginning and 80% of them wasn’t from the SEC.
How about the SEC fans root for their own team and stop riding off other teams success.

More complaints of cupcakes, blah, blah, blah. Where are these SEC haters when strength of schedules are announced? Even with FCS cupcakes, the top SEC schools are still in the top 25% of of SOS. Every year.

No problem with scheduling a cupcake. Big problem with refusing to help local athletic departments pay their bills. ‘Bama needs to play an in-state FCS or G5 team instead.

As the Big 10 and Big 12 go to the schedules in which they are playing 10 games with P5 teams, almost all of the PAC 12 does already, it is my hope the CFB playoff committee will take note. In 2016 only 25 teams will play 9 or less P5 games in the regular season. The SEC has 13 of those 25 teams. The ACC has 8 of those teams, and ND is one of those teams. Oh yes Baylor is one of those teams. Congratulations SEC…you have become Baylorized.

Like I said I hope people make it an issue the CFP has to take into consideration. The 9 game regular season with P5 teams amounts to an extra bye week.

“This is a fantastic opportunity for our program,” The Citadel head coach Brent Thompson said. “These games are important for many reasons, and they allow us to provide our cadet-athletes with once-in-a-lifetime experiences. I’m excited that our team will have the experience of playing in front of more than 100,000 fans against one of the premier teams in college football.”
This comment from Brent Thompson is what college football is all about.

Bama should call Baylor and see if they can get help Bama schedule Incarnate World.

He was probably confused with Aboline Christians.

GEG you still did not tell who your team is and their conference. How many players were drafted from your conference?

‘Bama FB players wouldn’t even be able to make through “hell week” at The Citadel, much less graduate and get a degree!

Sir, that is ugly and unkind. I am a Bama alumna with a son at the Citadel and love both schools. I beg to differ — a team doesn’t win National Championships by being undiciplined or weak or not displaying honor and integrity. Alabama recruits more National Merit Scholars than Harvard. It is hardly chump change. I expect comments like this from alumni of USC, not The Citadel. Make your mama proud, son.

I went to ‘Bama and was an Army ’58 pilot. Glen Coffee (former runningback for ‘Bama) is an Army Ranger Instructor. Bobby Greenwood graduated and last I saw he’s got SPC rank on so he would have an idea how to play the game. Generally you’re wrong.

They hate bama cause they can’t beat bama that’s all it is , sorry but got to find another place for the new collage football trophy

Well if Alabama so good than why do they pick so easy NB teams?

Is football all you men have on your mind? While Bama is a powerhouse they make play mistakes just like every other team out there.. I live in T- town but Auburn is the team of my heart. Sometimes they suck sometimes not but I am faithful and I give credit where credit is due as far as other teams in the SEC go. An awesome play is just that. You can have a great coach but it’s the team as a whole that makes those plays. I’m my experience if Bama is winning the fans are on top of the world if they lose they can be pretty nasty at times hence sending death threats to that poor kicker. Just saying. One thing is for sure we in the South are passionate about our teams bit men in general can take it to the the extreme sometimes.