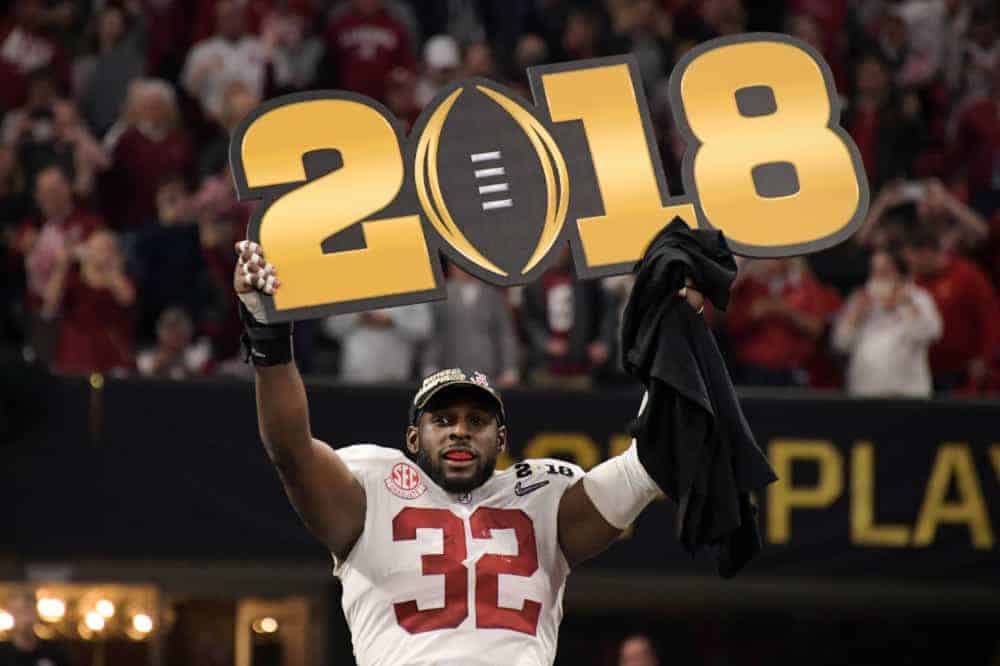 The Tuscaloosa News reported late Saturday that Alabama is in talks regarding future home-and-home football series with Notre Dame and Texas.

A home-and-home would represent the Crimson Tide’s eighth and ninth games against the Fighting Irish, with five of the prior seven going to Notre Dame. Just one of those games has taken place in the last 30-plus years, though, a 42-14 clobbering of the Irish by Alabama in the 2012-13 BCS National Championship contest.

Alabama Director of Athletics offered a somewhat cryptic response to the report.

“I’ll say that we are exploring some home-and-homes,” Byrne said.

More on this story as it becomes available.

Hopefully the ADs can get these series inked. True college football fans actually like to see competitive games like these in the conconf schedule instead of the cupcakes. It’s just one game per season, but better than 3 or 4 cupcake games that won’t be competitive. You have to give the Texas program credit, they have scheduled very few non power 5 games over the past decade. Sure, they have taken some lumps in doing so, but better viewing for the college football fans.

Alabama, as usual, will want one game (each) in Tuscaloosa, and one game “neutral”, like Atlanta or Orlando.

your an idiot looking for attention

Neither Notre Dame nor Texas will do that.

Just because these games may take place does not mean they will be competitive, I watched Texas vs Maryland last year, that was not competitive on Texas behave. Bama has been putting on a clinic in football the last 10 years & anyone that dares to play them either gets their ars whooped or the great teams like Georgia, Auburn, Clemson & even The Ohio State can either keep it close or beat them. Ole MIss & Texas A&M have had a couple of wins against them as well but normally Bama is only losing around one game a year.
As for calling teams cupcakes & not being competitive, do you not remember that FCS team that went into Ann Arbor & won 34-32? You don’t think that was competitive? They’re many FCS or G5 teams that play P5 & keep it close & sometimes actually win. I think you are more talking about watching P5 vs P5 then wanting to see P5 teams plays FCS & G5, which is fine but please don’t call them not competitive.

Please give me an example of Bama wanting to play a game in Tuscaloosa & asking the other team to play in ATL or Orlando?

Hopefully these games will happen but both sides will have to come to some agreement. Also this may shut up the people that bash Bama for their OOC scheduling & make them happy that it is a home n home but I am sure they will find something to complain about never the less.

1. The Irish will probably need every advantage they can get
2. It would be interesting to see a southern team play in the elements which is why it would be great if every few years the CFP would have the championship game in Chicago, Cleveland, Pittsburgh, or Buffalo.

This is counter to what Brian Kelly stated to the media before their latest bowl game. He said he thought the Irish’s schedule strength had been overly strong,for the last number of years, as well as already scheduled future games, which has increased probability of a loss,reducing opportunities to make the FBS playoff each year,. In effect he desired a decrease in the ND schedule strength. At any rate, 2020-21 are the first two ND seasons with openings. And those schedules are plenty strong already. Not sure about an ND-Alabama regular season game anytime soon.

Michigan State-Alabama 2016-2017. This was supposed to be a home and home but Alabama wanted to change it to a home game in Tuscaloosa and then a neutral site game. Michigan State would not do that so the series was cancelled.

The game at ND should be in the next to last week of the season. Southern teams need to start playing up north late in the season they have been avoiding that too long.

UT knows everybody would be talking about their matchup with Bama even though TAMU plays them every year… and they would love that. Kinda like when OSU scheduled ND and announced it during the UM-ND game.

that’s new to me? What is the source that came from?

Texas has been playing home/home series with who ever will play them! Of course they’d play Bama!

Since 2010 and going well into future schedules they’ve had home/home or home/home/neutral series with UCLA, Mississippi (around when they were doing decent), Notre Dame, USC, LSU, Ohio State, and Michigan. They had 2 more with Notre Dame except that ND backed out. And many of these years they’ve had a 2nd power-5 level team like BYU, Maryland, and Cal.

And if you aren’t impressed with UCLA or Miss? Cool. Those were the earliest of the bunch. ND x2, USC x2, a makeup date with Arkansas that they postponed, LSU x2, Ohio State x2, and Michigan are all back to back… with a 2 year gap before the return game with the Wolverines so, if I had to guess, I’d imagine they’re calling Bama, FSU, Clemson, Georgia, etc., to see who is available those 2 years.

Actually, Bama is kind of the surprise here. ND and Texas play marquee home/home series a lot. Bama has the reputation of only playing marquee non-conference games at neutral sites. It would be great if they’re looking to break that pattern!

… but yeah, my guess would be Bama/Texas 2025/2026 if this ends up working out. They may or may not keep scheduling Cal, Maryland, and BYU level games, but they aren’t likely to double up on LSU, Ohio State, Michigan, or Bama level games in their 3 OOC spots.

I hope these happen, and it would be a HUGE step for the Bama program. The neutral site games are fun and at least that’s 2 P5 teams playing to open the season, but there’s just something about 2 top programs going head to head on campus.

The comment about Bama wanting a home game and a neutral site game is ridiculous though. Even the Michigan State series wasn’t going to be “one in Tuscaloosa, one neutral site.” Bama wanted to move BOTH to neutral sites, like the LSU-Wisconsin series that was played in Houston and Green Bay. Bama’s philosophy hasn’t been trying to fleece teams out of a home game….they just don’t schedule home and homes. It’s a neutral site P5, 2 home G5s, and a home FCS. Every year. Not my cup of tea as a fan, but it’s a philosophy that clearly has worked for them.