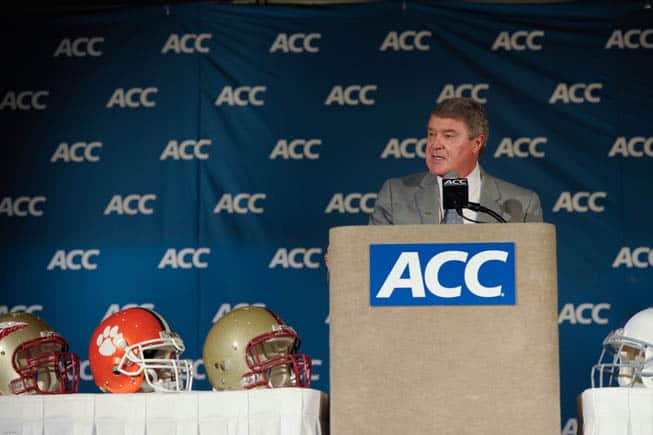 Last week, the ACC announced a new bowl lineup beginning in 2014. The lineup will be effective following the conclusion of the 2014 regular-season and extends through 2019.

More bowl partnerships for the ACC are expected to be announced soon. Here is info from the ACC on the selection order:

The league will be returning to the Russell Athletic Bowl for the 14th consecutive season after the 2014 campaign when the new agreements go into effect. The league has posted a 9-3 mark in the game.

After the College Football Playoff, Orange Bowl, Capital One Bowl (when applicable) and Russell Athletic Bowl, selections will be made from a pool which has the conference sending four teams to the Hyundai Sun Bowl, the Belk Bowl, the New Era Pinstripe Bowl and either the Franklin American Mortgage Music City Bowl or the TaxSlayer.com Gator Bowl.

Last July, the ACC and the Orange Bowl Committee announced a 12-year agreement beginning after the 2014 regular season.

The agreement places the ACC Champion in the Discover Orange Bowl unless that team is chosen to play in the College Football Playoff by the selection committee.

If the ACC Champion does participate in the College Football Playoff, another team from the ACC would be selected to play in the Orange Bowl, which will be played each year on New Year’s Day at 1 p.m. ET.

The Russell Athletic Bowl announced on Thursday that they will get the first available selection from the ACC after the College Football Playoff, including Notre Dame.

The ACC’s current opponent comes from the American Athletic Conference, but ESPN has reported that the new match-up will feature a team from the Big 12.

The 2013 Russell Athletic Bowl will be played at the Florida Citrus Bowl in Orlando on Saturday, Dec. 28 and will be televised by ESPN at 6:45 p.m. ET.

The Sun Bowl announced on Friday a six-year extension of their contract with the ACC beginning in 2014.

The Hyundai Sun Bowl will share the third through sixth selections from the ACC with the Belk Bowl, New Era Pinstripe Bowl and the Taxslayer.com Gator Bowl or the Franklin American Mortgage Music City Bowl.

A Pac-12 team will continue to be the opponent for the ACC. The Sun Bowl will select the ACC school after the College Football Playoff and/or Rose Bowl, the Alamo Bowl, Holiday Bowl, and Kraft Fight Hunger Bowl.

The Belk Bowl has announced a six-year extension of their agreement with the ACC beginning in 2014.

The Belk Bowl will select its team from the ACC after the College Football Playoff, Orange Bowl, Capital One Bowl (when applicable), and the Russell Athletic Bowl. Their opponent is currently a team from the American Athletic Conference, but it is rumored that the SEC will become the future opponent.

The 2013 Belk Bowl will be played at Bank of America Stadium in Charlotte on Saturday, Dec. 28 at 3:30 p.m. ET and will be televised by ESPN.

On Thursday, the Franklin American Mortgage Music City Bowl announced a new partnership with the TaxSlayer.com Gator Bowl, which means that the Music City Bowl could feature a Big Ten or ACC team as one of its participants through 2019.

The bowl will now feature an ACC and Big Ten school three times each over the six-year deal, and they will be matched up against a team from the SEC.

The 2013 Franklin American Mortgage Music City Bowl will be played at LP Field in Nashville on Monday, Dec. 30 at 3:15 p.m. ET and will be televised on ESPN.

As previously mentioned, the Gator Bowl and Music City Bowl have reached an agreement to share their selections with the Big Ten and ACC, including Notre Dame.

This new setup, which begins in 2014 and runs through 2019, stipulates that the Big Ten and the ACC will each send a team to the Gator Bowl three times over the six-year period.

Back in June, the New Era Pinstripe Bowl announced a six-year deal with the ACC and the Big Ten. A representative from each conference will face off each year from 2014 through 2019.

The game is played each season at Yankee Stadium in Bronx, NY. This year’s contest will be played on Saturday, Dec. 28 at noon ET and will be televised by ESPN.

On Friday, the Capital One Bowl announced an extension of their agreement with the Big Ten Conference through the 2019-20 season.

Beginning after the 2014 regular-season, the bowl will have the first selection of its Big Ten team after the conference’s Rose Bowl and College Football Playoff teams are identified. The opponent will likely continue to be a team from the SEC, but discussions are still ongoing.

The 2014 Capital One Bowl, which is played at the Citrus Bowl in Orlando, will kickoff at 1 p.m. ET on Wednesday, Jan. 1 and will be televised by ABC.

The Outback Bowl announced on Friday that they have extended their contract with the Big Ten Conference through the 2019 season.

Raymond James Stadium in Tampa, Florida is the host site of the annual New Year’s Day game, which also features a team from the SEC. The 2014 game will be played on Wednesday, Jan. 1 at 1 p.m. ET and will be televised by ESPN.

Last week, the Detroit Lions announced that they had agreed to a six-year deal with the Big Ten Conference for a bowl game to be played at Ford Field beginning in 2014. According to ESPN, the ACC will most likely fill the slot opposite the Big Ten.

The inaugural game is tentatively set for December 30, 2014. A title sponsor will be announced at a later date.

Who really cares what bowl games the ACC gets. I mean they have only won 3 BCS games in 16 tries. Trust me on this, none of their teams will be in the 4 team playoff. Those teams will be from the 4 Power Conferences (Big 10, Big 12, Pac 12, and SEC). The ACC is a Basketball Conference first, and always will be.

I think u need to add big ten to that for football my friend.

ACC is power conference big 12 not so much

Big ACC fan here. I guess you were wrong. Trust me, Florida State just won the national title and will probably be in the first ever 4 team playoff.

Uh, let see FSU won the National Championship and Clemson won the Orange Bowl. I think they’re from the ACC. The ball they were playing with was oblong, not round.

So Notre Dame will play the Capital One Bowl, the Russell Athletic Bowl, the TaxSlayer.com Gator Bowl and the Hyundai Sun Bowl.

ACC is one of the top four conferences in the country. Deal with it!!

No one cares about Georgia Tech, Maryland, Virginia, etc