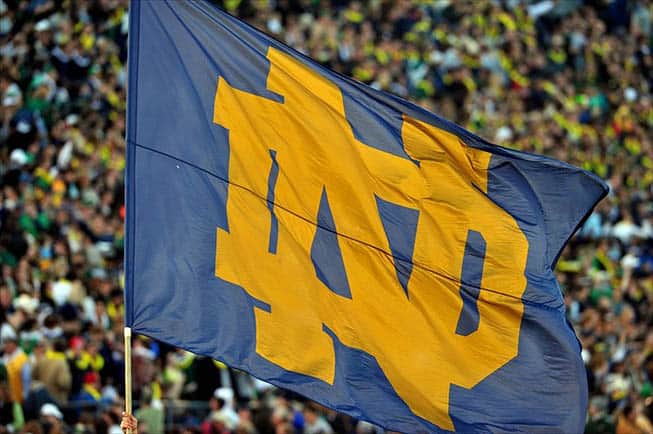 The ACC has officially announced the 2014 through 2016 football opponents for the Notre Dame Fighting Irish.

“The football partnership between the ACC and Notre Dame will not only enhance our league’s already ambitious football schedules but also will provide terrific fan excitement,” said ACC Commissioner John Swofford. “One of the benefits, moving forward, is that almost all of our student-athletes will have an opportunity to play against Notre Dame during their ACC careers which is extremely special.”

Last September, Notre Dame agreed to play five ACC opponents per season and join the conference in all other sports. The Irish will rotate three home and two away games every other year.

Listed below are Notre Dame’s ACC opponents for the 2014 through 2016 seasons. Exact dates are to be announced.

Interesting. I think popular belief was that ND was way overbooked but it is only ASU and another game to be cancelled for 2014. 2015 and 2016 in fact have room for an addition now.

Yeah, that’s right since Pittsburgh is off the 2014 schedule now.

Swofford strikes again, giving his beloved UNX a trip to South Bend in the first year Notre Dame is in the ACC. He should be fired!

Wouldn’t he have scheduled ND coming to Chapel Hill then?

It will never happen with Purdue; they are in-state rivals in a long standong series. the other 2 games are 1-time contracts.

Absolutely correct. I can’t see a scenario where Purdue is not on ND schedule

I am guessing that at least one Syracuse game, or maybe even both are moved to the Meadowlands.

The Syracuse games were already scheduled and were going to be at the Meadowlands. Cuse confirmed yesterday that they will stay there

I went to Meadowlands for USC Syracuse last year. The upper bowl was empty and it was 70/30 USC fans. Alumni of Syracuse apparently were annoyed that return game wasn’t played at carrier dome and it showed by lack of attendance there. Like any neutral site Notre Dame game will be 90/10 Irish fans

I think Rice does something for Notre Dame in the area of prestige with the elitism of the academic reputation. i would be very surprised that ND drops the Temple game as well Temple is on the rise and much more relevant to alumni than the Sun Devil Nation, though PHX is Catholic to a large degree. ASU should come out the loser in my humble determination…

A Rice or Temple would likely be more than happy to push out a road date if a home-and-home were added to sweeten the deal to make it a 2 for 1. And Philly or Houston are not the worst places for the Irish to visit, games could move to NFL Staidums.

One publication entitled future Notre Dame schedules in a grid format for the next 8 years or so has already eliminated the game at Arizona State for 2014. ASU is gonna feel that one for awhile. They never sell out home games and now this to their season ticket sales, ND was the lynchpin of their propaganda for ’14. Notre Dame is dancing with the Devil literally now in Phoenix. It may be another 20 years before a bowl game sees ND playing well in it.

Is there a URL for this grid? I am curious to how it projects the four BYU games not tied to years right now. Thanks.

How did Syracuse luck out with hosting ND twice.

G of F – Syracuse game for 2014 was already on the schedule at the Meadowlands.

I think the game at the Meadowlands is designated as a Notre Dame Home game.

disregard the last comment. I misread the schedule. Yep Syracuse gets Notre Dame a home twice.

A 2 for 1 where the road game is on ABC or ESPN national doesn’t hurt Notre Dame whatsoever.

I doubt ND goes to Reliant Stadium in Houston they have been under drawing in the worst sort of fancy ND would have a practical home game like Texas has when they play Rice and I hate to say it a typical 37-3 like result. 80 percent of the fans would be Irish clad

I dont know if Syracuse is on the rise without Nassib and Shamarko Thomas but Meadowlands is a million times better for Irish than a moment in the Carrier Dome. Irish and domes are blasphemous let alone Sun Devil Stadium or the Fiesta or Phx in general. They prefer a night game in Palo Alto or the Coliseum anyday with the goings on in the Pac12 and their graduation losses

Forgive me if I’ve missed this: has it been clarified how home-road designations for this arrangement will be determined? Specifically, will every school at some point get to host ND? I know they hosted Alabama a few years ago, but I still have a hard time envisioning ND taking a road date at Duke.

They haven’t announced it, but I imagine every school will host. As for Duke, maybe they could host in Charlotte.

Every univ. hosted but Asu so anything goes if your ND

Pretty well done, minimal disruption. All ND has to do is get one 2014 school to agree to play in 2015 or 2016 instead and they are pretty much set. UMass could be dropped I think.

This pretty much builds in 8 set games, 5 ACC plus Navy, USC, and Stanford (soCal and norCal). Figure they like a Texas school and one B1G, and they are almost done before they start.

Can’t see a scenario? Purdue wants to jog the pattern of games by a year to match Big Ten scheduling. Notre Dame needs to drop one for 2014. Pushing games scheduling back a year with no game in 2014 is one such scenario.

So random question! I am trying to plan a date for 2014 wedding. I would really like oct. but I don’t want to do it on a game day!!!!! When do you think they will announce their bye week?

Which team? Judging from past releases, it may not be until January.

They will probably announce it this Summer or Fall, I would guess.

This is dumb, Syracuse twice and Miami, FSU Boston college once? They should play those 3 teams every year

The Irish should play in Florida every year. Good for recruiting. Best players come from Florida.