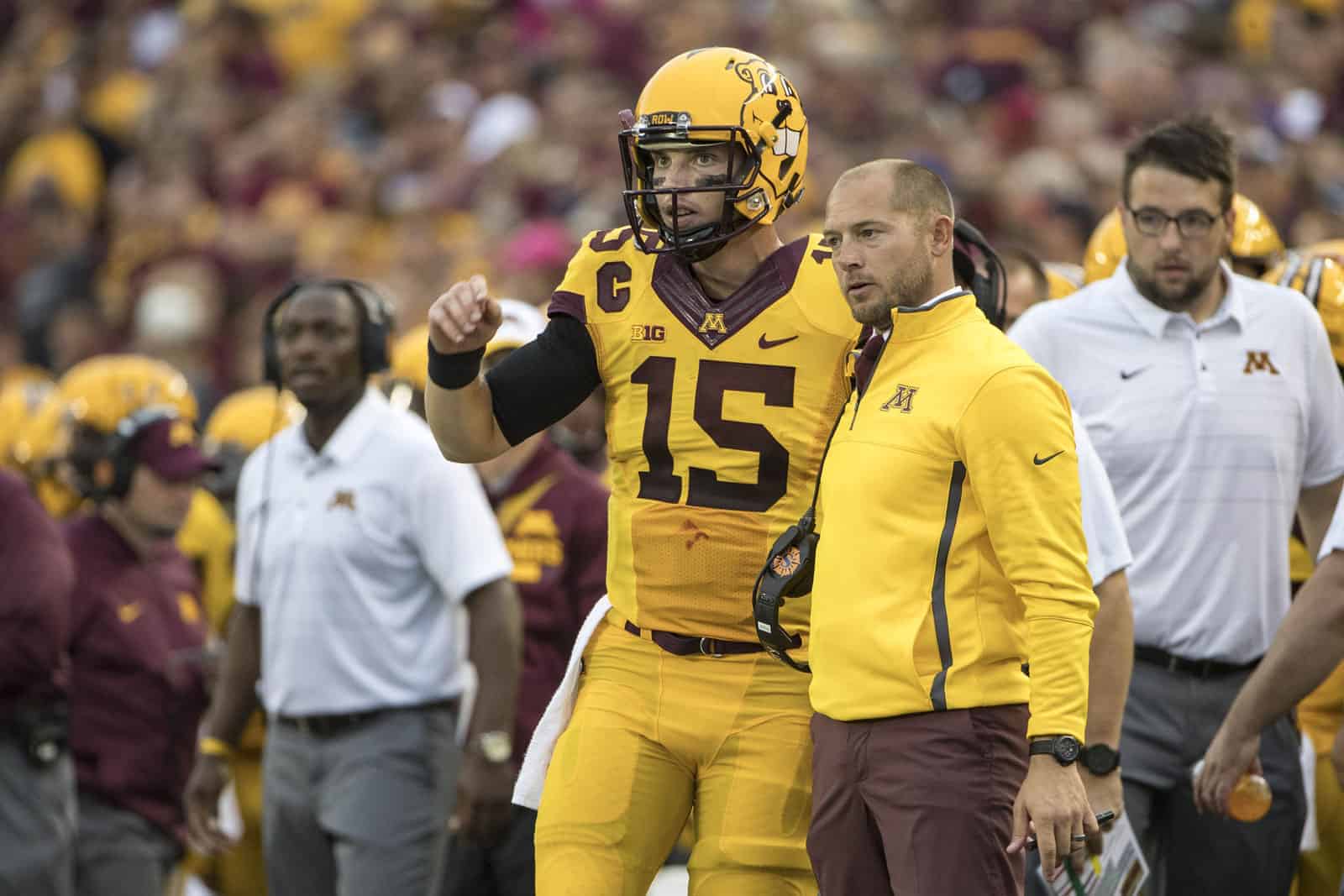 Imagine the Top 25 rankings coming out three weeks into the 2018 season.

Predicting which teams will be there – for sure – is simple…Alabama, Ohio State, Clemson, Oklahoma, etc. Even if one of these big boys was to get upset early, they’d hang around until, at the very least, their second loss.

What’s more difficult is selecting which teams might surprise us by breaking into the Top 25 after making a perfect 3-0 start. These are the programs who will be labeled “better than expected” or “improved” or even “primed to make a run.”

While we don’t have a crystal ball, what we do have is a blueprint of each team’s season in the form of their schedule. In the case of the programs listed here, it’s not that the entire body of their 2018 slate isn’t difficult…it’s that it’s easy, in some cases very easy, at the beginning.

The good news for new head coach Chad Morris is a super-easy start to 2018. Arkansas hasn’t lost to an FCS opponent since 1992, its first as an SEC member, when it opened with a shocking 10-3 defeat to The Citadel. It was so painful that third-year head coach Jack Crowe stepped down after the game.

Another new head coach with an easy transition into his new role, Dan Mullen ought to look like the right choice for the Gators early. Florida was ranked as recently as last season, when it hit No. 21 before losing to LSU by one point in mid-October. It was the first of five-straight SEC losses and a 4-7 finish, the lowest mark since 2013.

Speaking of 2013, that was also the last time the Gators fell to an FCS foe, losing 26-20 to Georgia Southern, who has since moved up to the FBS ranks via the Sun Belt. It was the first time Florida had fallen to a team considered a “non-major” at game time since 1947, when it hosted North Texas and lost 20-12.

The Gators have never played Colorado State in football but are a perfect 7-0 against the current Mountain West. As for Kentucky, it’s one of only two Power opponents a team on our list will face in the first three weeks. Though this means a bigger test for the Gators, keep in mind that they’ve won 31 straight vs. the Wildcats and haven’t lost in Gainesville since 1979.

Minnesota has only been ranked in the AP once in the last nine years. It was late in the 2014 season and the Gophers had upset (21) Nebraska 28-24 in Lincoln. Freshly adorned at No. 22, they traveled to (14) Wisconsin the next week for the season finale, falling 34-24 and dropping from the polls.

Minnesota is 1-1 all-time against New Mexico State, losing in 2013 in Las Cruces and winning in 2011 in Minneapolis. It’s never played Fresno State in football but is 12-3 all-time vs. the Mountain West. That leaves Miami (Ohio) who the Gophers hold a 3-0 advantage over. They are 31-4-1 vs. the MAC.

Scott Frost, who takes over at Nebraska after blazing a trail at UCF, is another new head coach with an easier path to a 3-0 record. The Cornhuskers haven’t been ranked since the end of the 2016 season when they were No. 24 coming into a loss to Tennessee in the Music City Bowl.

The Huskers are 1-0 vs. Akron and 5-1 all-time against the MAC, the only-ever loss coming last season vs. Northern Illinois. Even more favorable, they own a 4-0 mark against Troy and are 13-0 all-time against the Sun Belt. That leaves Colorado, the second of only two Power opponents on our list. Though, as in the case of Florida-Kentucky, this presents a bigger test for Nebraska, the Buffs haven’t won a non-conference game against a Power team since 2010 when they edged Georgia 29-27.

As opposed to many of the other teams listed here, Oklahoma State has been ranked consistently since the middle of the 2016 season. That said, the Cowboys aren’t a part of ESPN’s post-signing-day Way-Too-Early Top 25, so while their appearance in the AP Top 25 in Week 3 wouldn’t shock anyone, they’ve got a clear path to get there.

Oklahoma State hasn’t fallen to a “non-major” since 1980 when it opened with a 20-19 loss to West Texas State (now D-II West Texas A&M). It’s 1-0 vs. South Alabama and 17-1 all-time vs. the current Sun Belt, the only-ever loss at Troy in 2007. That leaves Boise State, who, while not a Power team, certainly has the potency of one. The Cowboys have never faced the Broncos in football and are 13-5-1 vs. the Mountain West. Like Florida-Kentucky, this won’t be a cake walk, but it’s not exactly USC (Texas’ Week 3 opponent) either.

Yet another head coach with a tiptoe through the tulips, Mario Cristobal has a legitimate shot at having the Ducks ranked by Week 3. The last time Oregon received mention in the AP was briefly in 2017, a one-week stint at No. 24 sandwiched between a 49-13 win over Wyoming and a 37-35 loss at Arizona State.

The Ducks have never, ever squared off with a current MAC member in football. They are 12-6 all-time against San Jose State but haven’t lost to the Spartans since 1983. The last time the fell to a “non-major” was 89 years ago, in 1929, when they traveled to St. Mary’s (of Moraga, Calif.) and lost 31-6.

Washington State was ranked in the AP throughout last season only to fall out after getting squashed 42-17 by (18) Michigan State in the Holiday Bowl.

The Cougars are 4-2 all-time vs. Wyoming but have never lost to the Cowboys in Laramie. Though they’ve split the last four with San Jose State, the two haven’t met since 1996. That leaves Eastern Washington, which is also the last FCS team the Cougars lost to, something that happened as recently as the 2016 season opener.

Wisconsin is the only team on our list to receive mention in ESPN’s Way-Too-Early rankings, coming it at No. 7. That’s also where they finished last season in the final AP. The Badgers’ gentle beginning will give them a shot at the Top 5 by mid-September, a scenario that becomes more likely if somebody big gets upset.

Wisconsin and Western Kentucky have never met in football, but the Badgers are a perfect 6-0 against the current Conference USA membership. They’ve also never faced New Mexico and are 30-7 all-time vs. the Mountain West. They are 2-1 vs. BYU but haven’t fallen to the Cougars since 1980.

Oklahoma St.-Boise State will be a good game, not sure if that’s remotely the guaranteed win some of these other games are. Ditto Nebraska’s schedule, Colorado and Troy would’ve beaten the 2017 Huskers, so while they’re favorites, I wouldn’t say guaranteed. Finally, Fresno St is just straight up better than Minnesota, to the point that they probably should be road favorites despite being G5. The rest of these seem about right, and Arkansas, Oregon, and Wisconsin fans should be demanding better games from their ADs

I totally agree, robbymack87! Once again, another anti G-5 article.

It’s just one person’s opinion on teams that will start 3-0. Lighten up.

Greg has a point here. Why feed into the ESPN “Power 5” crap? The only difference between Power 5 and G5 conferences are the fact ESPN has pumped hundreds of millions of dollars into select conferences like the SEC and ACC while NBC has done the same with Norte Dame and caused the rift in the FBS ranks.
The four team “play-off” is perfect proof of the bias created by ESPN.

It is what it is for now. If we don’t “feed in”, what’s going to change? Nothing. We are a small niche website with no influence over what people think.

There is a reason why ESPN pumps hundreds or millions of dollars into the SEC & ACC, look at what their return is. It is a good business decision, you can’t fault them for that. NBC has made millions off of ND, once again, a business decision. FOX has just started airing BIG football in hopes they make money as well. There is no bias anywhere, just cable channels looking to make a dollar, as we all are.
I highly doubt this would’ve been a popular article if it said ” 8 G5 teams that will start the 2018 season 3-0″ & I bet none of us could name one that will.
I will put my money on Oregon cruising to a 3-0 start, there is no anit-5G bias there! Go Ducks!

Love the Ducs too, but thats one pathetic schedule. The honeymoon phase for Cristobal will be very short if they don’t start 3-0.

wrong…Minnesota is terrible and will lose at least one of those games, Ok.State will lose to Boise State and I think Colorado State has at least a shot at beating Arkansas at home

and last years Troy team was actually a better team than last years Nebraska team so not sure that one is a slam dunk either.

As an Arkansas fan, I hope you didn’t jinx us. I still remember 2012 when we lost to UL-Monroe when we were ranked 8th in the country. Anything is possible.

First I think Arkansas and Minnesota will go 3-0 and fail to get six wins for a bowl game.

I think Florida and Oklahoma St will have their hands full with Kentucky and Boise St respectively.

I see a few on that list that likely won’t start 3-0. Colorado State, Fresno State, Boise State, Troy and WKU don’t stink. Kentucky could possibly go to a bowl.

I can assure Minnesota, Wisconsin and Nebraska will not be unbeaten in their first three