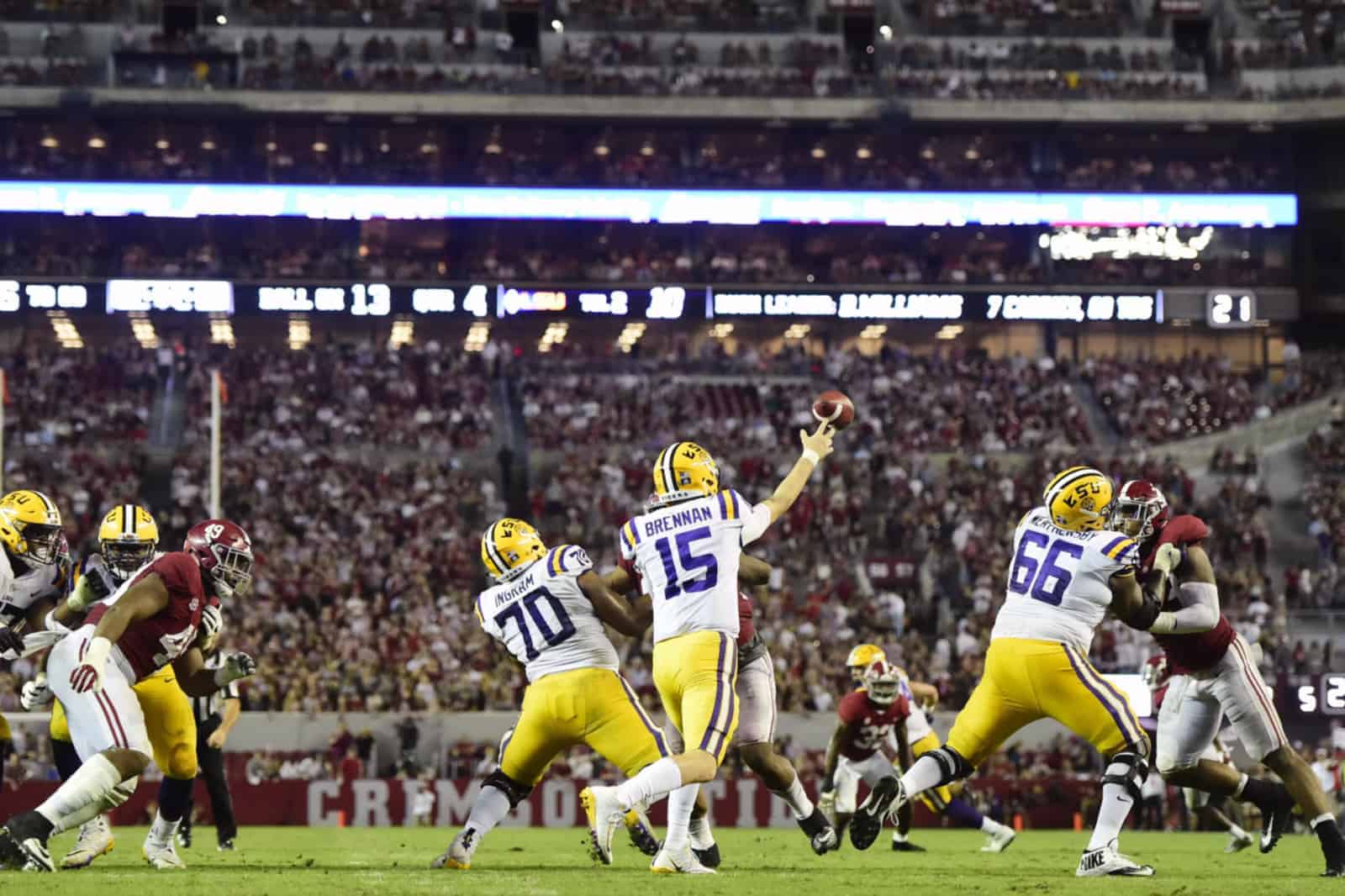 While the lion’s share of the college football games scheduled for 2018 are between two FBS teams who have met before, only seven feature a combination that was played on the biggest of stages.

How big was it?

One team walked away wearing a national championship crown, while the other, well, they walked away with one of the toughest losses in program history.

That makes these games the biggest FBS vs. FBS grudge matches in all of 2018.

The Seminoles, headlined by quarterback Chris Weinke and wide receiver Peter Warrick, also cruised through their regular-season slate, averaging 38.2 points per game, No. 3 in the nation. The icing on the cake was a 30-23 season-ending win at (3) Florida.

In the title game itself, FSU roared out of the gates and held a 28-14 lead at halftime, including a crucial blocked punt for a touchdown. The Hokies scored 15-unanswered points in the 3rd quarter only to give up 18-straight to the ‘Noles in the 4th. Florida State won the game 46-29.

Twenty-years ago this season, the Minutemen and Eagles squared off for all the FCS marbles in Chattanooga, Tennessee. UMass was led by head coach Mark Whipple in his first year of a six-year stint in Amherst. After a series of NFL jobs, he returned to the Minutemen in 2014 where he still serves as head coach. Georgia Southern was led by Paul Johnson, who went on to coach at Navy (2002-07) and is now at Georgia Tech.

Despite losing three games, UMass won the Atlantic 10 and then built momentum in the early rounds of the playoff with wins over McNeese State (21-19), Lehigh (27-21) and Northwestern State (41-31). Georgia Southern went undefeated in the regular season, won the Southern Conference and pounded Colgate (49-28), UConn (52-30) and Western Illinois (42-14) on its way to the National Championship game.

The (12) Minutemen upset the (1) Eagles 55-42 in the title match, earning the only national championship in program history. UMass moved up to the FBS in 2012 via the MAC and went independent in 2016. Georgia Southern moved up as a Sun Belt member in 2014.

Vince Young’s 8-yard touchdown run with 19 seconds remaining in the 2006 Rose Bowl sealed (2) Texas’ 41-38 triumph over (1) USC and instantly became one of the most iconic plays in college football history. It also earned the Longhorns their fourth national title and the first in 25 years.

USC leads the all-time series 5-1. Dating back to 1955, all five of the other meetings were played during the regular season, including last year’s 27-24 Trojan win in Los Angeles.

Twelve seasons before Georgia Southern played UMass for the FCS title, they faced Arkansas State in the championship game. The ’86 Eagles went 9-2 in the regular season, with the only losses coming at Florida (38-14) and at East Carolina (35-33). They cruised through the first three rounds of the playoffs under the direction of head coach Erk Russell, a three-sport athlete at Auburn who coached baseball at his alma mater from 1959-62.

Arkansas State went 9-2-1 in the regular season, including a win 30-10 at Memphis (then a Division I-A independent) and a 10-10 tie at Ole Miss. One of the two losses was a 24-9 defeat at Mississippi State. The team was coached by Larry Lacewell, who went on to serve as director of scouting for the Dallas Cowboys from 1992-2004.

The infamous all-SEC BCS title game, LSU had already bested Alabama once in a No. 1 vs. No. 2 matchup during the regular season, but were forced to do it all over again for a national championship.

The two have met 82 times since the series began in 1895. All but the first nine games (when one or both schools were independents) and the 2011-12 BCS title game were played as conference games. Alabama leads 52-25-5 all-time and has won seven straight.

The only case of two teams from one state playing in what was labeled as the national title game, Florida-Florida State’s championship match was played in the middle season of Bowl Alliance, which reigned from 1995-97. It followed the Bowl Coalition scheme (1992-94) and preceded the BCS (1998-2013).

It was also a rematch of the season finale for both teams, making it like LSU-Alabama’s national title scenario. In this case, Florida State played the role of the Tigers. The (2) Seminoles beat the (1) Gators 24-21 on Nov. 30, 1966 only to have to play them again in the Sugar Bowl 33 days later for the biggest of big enchiladas.

And like LSU, Florida State got destroyed the second time around, losing 52-20. It was Steve Spurrier’s seventh season in Gainesville and Bobby Bowden’s 21st in Tallahassee.

The 1973 season was the first that the NCAA split its former “College Division” into a Division II and III level. Subsequently, it was also the inaugural year of the D-II playoffs.

After kicking off the season with a 21-19 loss at Eastern Michigan, Louisiana Tech ran the tables and captured a Southland conference title. Narrow wins over Western Illinois (18-13) and Boise State (38-34) propelled them into the first-ever D-II championship game.

Western Kentucky was a perfect 10-0 in ’73, winning the Ohio Valley Conference title. It beat Lehigh in the quarterfinals (25-16) and Grambling State (28-20) in the semifinals.

The Bulldogs blanked the Hilltoppers 34-0 in the title game, earning it the second of their three consecutive national titles. After a series of moves up the college football ladder for both schools, Western Kentucky joined Louisiana Tech in Conference USA in 2014.

The Bulldogs lead the all-time series 5-3 but the two have split the last four. They also clashed for the 2016 C-USA championship, WKU winning 58-44 in a barnburner.