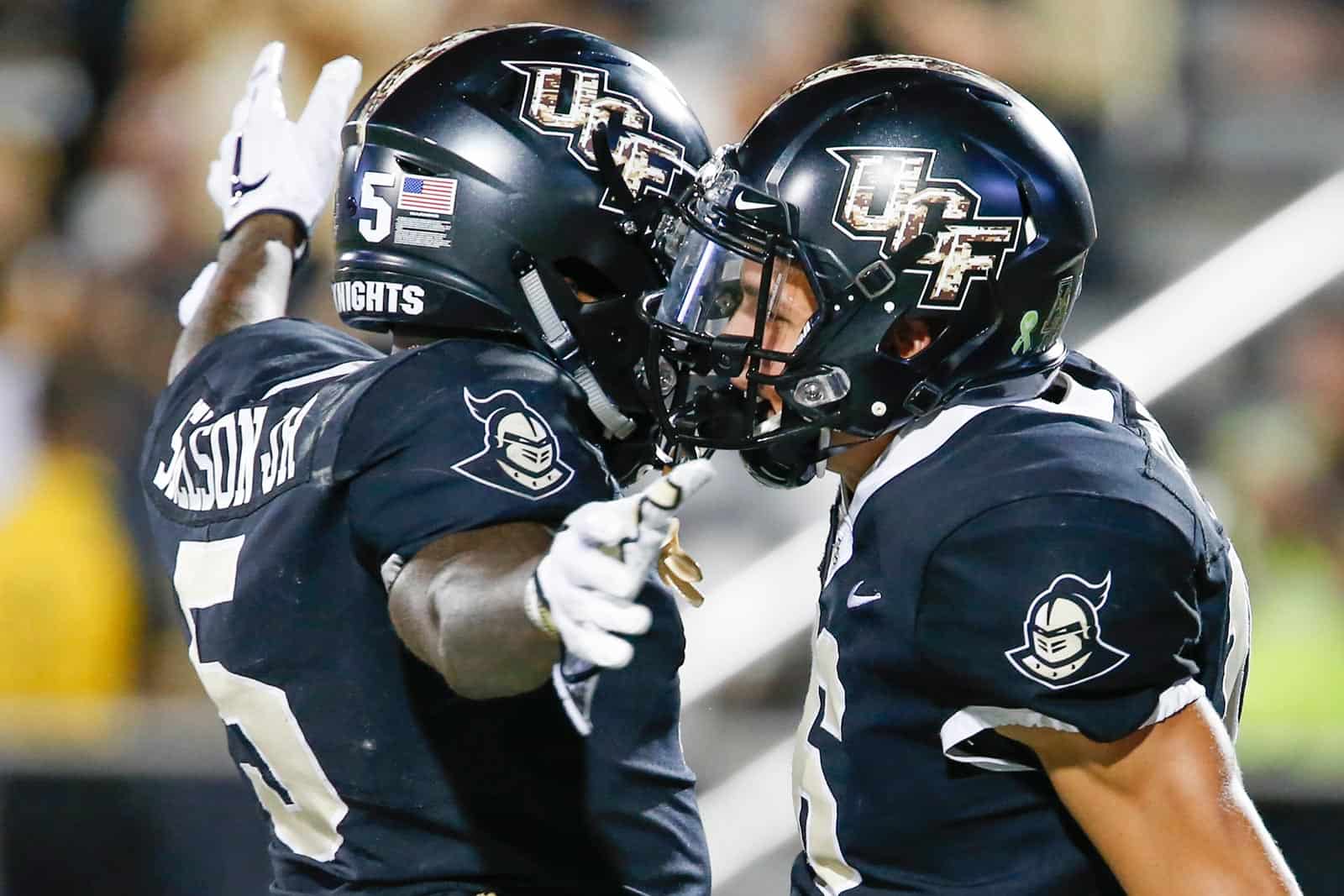 What’s the difference between deserving and earning an opportunity?

According to Merriam-Webster, “deserve” is to be worthy, fit, or suitable for some reward while “earn” is to receive an opportunity as a return for effort and especially for work done or services rendered.

Far more than a meaningless label, Power 5 membership gives programs a clear pathway to a national championship via the CFB Playoff bracket. The five conferences at the apex of the sport are the only place where a given coach can stand in front of his players at the beginning of the season and state, unequivocally, “if we win all of our games, we’ll play for a national title.”

The teams listed here, in order of level of performance, have consistently, on the football field, earned a shot at the next level.

No program has earned a shot to move up more than Boise State has. Over the last decade, and despite a major transition at head coach, the Broncos have hands down outperformed the rest of the field.

Boise State plays in one of the more competitive Group of 5 leagues, winning the Mountain West title three times since joining up in 2011. The Broncos have also been deliberate in not just booking games with Power 5 opponents, but scheduling powerhouse programs that will provide serious tests – Oregon in 2009, Virginia Tech in 2010, Georgia in 2011, Michigan State in 2012, Washington in 2013 and 2015, Ole Miss in 2014, Oklahoma State in 2018, and Florida State in 2019.

While Houston hasn’t had the dominance in conference play that Boise State has, it’s earned a slight edge over the Broncos vs. Power 5 opponents. It’s also worth noting that both schools played the same number of Power foes in the last decade – the Cougars earning a 13-7 mark and the Broncos going 12-8.

What strengthens Cincinnati’s case, and makes its numbers not an apples-to-apples comparison, are the eight seasons it spent in the Big East. Four of these years (2009-12) came in the last decade, meaning the Bearcats were playing programs which are now Power 5 members (think West Virginia, Louisville, Syracuse, and Pitt), at a much higher clip than other current Group of 5 members.

If you include these games, Cincinnati has played twice as many Power 5 opponents since 2009 than any other program listed here other than independent BYU. It makes the Bearcats 23-17 mark vs. the top tier of competition (7.5% less than Houston’s mark and a mere 2.5% lower than Boise State’s) even more impressive because they’ve managed to maintain a winning record despite twice the volume of games.

Though their numbers aren’t on par with Boise State or Houston’s – the Cougars’ status as a non-Group of 5 program that is committed to scheduling additional, high quality Power opponents makes them perhaps the most deserving of a shot at the next level.

While UCF might be considered the obvious first option to move up to a Power 5 league, its performance has been inconsistent over the past decade. Where on one hand the Knights went 25-1 from 2017-18 and 22-5 from 2012-13, on the other they went 6-19 in the two-season gap between the two dominant streaks including posting an 0-12 record in 2015.

Navy’s case is complicated by the fact it was an independent up until 2015 when it signed on with the American. That means, like Cincinnati and BYU, that it’s played more Power 5 opponents over the last decade than other comparable Group of 5 members. The Midshipmen have 29 such games vs. Boise State and Houston’s 20. Add in the fact that their 11-18 mark (7% better than UCF’s performance) includes a yearly clash with Notre Dame and other formidable opponents such as Ohio State (2009 and 2014), South Carolina (2011), and Penn State (2012) – and it’s even more impressive.

What hurts Northern Illinois’ case is first, it plays in the MAC – where the level of competition isn’t necessarily on par with the Mountain West or American. Next, it’s showed poorly vs. the Power 5 – posting a 7-15 mark vs. Houston’s 13-7 and Boise State’s 12-8.

You’ve also got to wonder how each program listed (especially those in Tier Two) would be transformed if it did ascend to a Power 5 league. While not a magical wand, recruiting, financial viability, exposure, etc. would all be ramped up – especially for programs who have already made it clear, on the field, that they could compete at a higher level.

Indiana and Kansas have blue-blood basketball programs and Indiana football do get a bowl bid periodically. Wake Forest is competitive in football. I think adding a 6th conference called the National Conference and add these teams plus 5 more to make 12. Take each conference winner and 6 at large teams. Top 4 seeds get a bye and first two rounds home games for top seeds until you get to the semi-finals. College football would then get some credibility back because right now that CFP is a joke.

Power 5 conferences are not about having the best teams, they are about making the most money. They need schools with strong alumni bases and loyal fans that draw a TV audience whether they are currently playing well or having a bad season. Some smaller schools already in the power 5 don’t fit the mold (Duke, Wake Forrest, Miami (FL), Vandy, TCU, Baylor), but most do. Commuter schools where the alumni don’t have a strong affiliation to the school (Houston, UCF, Cinci) are going to be hard press to get in and schools with no TV market (Boise St) are pretty much out.

I wish you were wrong that it is about the money, but you are right.

Keep up. UH is not a “commuter” school.

UCF is the largest public university in the nation, and is right next to a major media market in Orlando. Houston is in, well, houston, one of the fastest growing if not the fastest growing city in the nation. cincinnati is in a much bigger market than a baylor or a wake forest. i agree its about the money but let’s not pretend like these are commuter schools with nothing to offer. it’s just about the fact that revenue sharing means no one wants to share with another team and no team is going to be forced out for fear of everyone else thinking they are next.

Ummm No. The majority of the money is tired around TV contracts. Houston can delivery the eyeballs more than a lot of P5 schools. Their downfall is Texas politics.

Cincy was a commuter school in the 70s and 80s but that is no longer the case 70 percent of students live on or near campus now. Football really didn’t mean much when I was a student. It was all about the basketball. The big East helped not only basketball but it made football much more important. Nothing beats a Saturday night game at nippert stadium

This is more true than many want to admit. These schools have tons of fans when they are winning, that are nowhere to be found when they are not. That powers that be don’t pay a lot of attention to programs hoping to get an invitation to the big time before their ride turns back into a pumpkin.

BYU is more consistant than SOME of the Power 5 teams.

Saying they are more consistent than most is a stretch.

In the BYU section it makes it seem like Cincy has only played Rutgers & Pitt every year. They’ve also played Ohio State, Michigan, Tennessee, Oklahoma, Miami FL (W), Purdue (W), UCLA(W) and NC State(W). Not exactly like they have only played against P5 cupcakes

The AAC and the Mountain West don’t need the P5. They keep on improving and close the gap year after year. The best football teams in these conferences have demonstrated that they can hang with the “top tier”. This season, AAC basketball came dangerously close to surpassing the Pac12 in the Sagarin Ratings. In baseball, the AAC is already far better than the Big Ten.

But just think what they could do with the P5 money and “prestige”. The fact that they were cut-out of the club when it was formed limits their ability to complete long-term and it continually takes it’s toll. The top-tier teams in the AAC (and other G5 leagues) continually out-perform teams that are in the P5. There should be some criteria laid out defining what criteria non-P5 universities need to meet to gain entry, and current P5 teams that fail to meet that same criteria should be booted. In general, lean toward inclusion and providing a path for inclusion instead of being focused on exclusion.

Of course AAC baseball is going to be better, look at their southern footprint.

Maybe if Marshall actually best West Virginia for a change…..the Herd fans get whipped into a frenzy and then WVU just cleans their clocks. Get a couple of W and then we can include Marshall.

Are you a Boise State graduate?

Memphis has been solid for almost 10 years. Have invested alot into facilities. Consistently recruits with P5 and only team in 2 seasons to make UCF Sweat until the last possession.

Memphis academics are in the toilet .

he wasn’t talking about football only academics. the U Memphis is like dead last in US news and ranking list for universities.

Thanks for the article, I have been hinting for it for a few years. I hope next week gives the list of Power Schools that should be considered more like Group of 5.

Rutgers should lead the list. Delaney cannot admit what a pitiful program it is. Brought in simply for Big10 alums in the Metro area to boost Rutgers home attendance and give them a P5 win over a piss poor program.

What a joke to not include USF. lol

USF should be on this list. having been in a power conference (big east) before honestly the top programs in the AAC can beat most teams in the P5 conferences. Houston,USF, UCF, Memphis, Cinn, Temple.

Conversely can, USF was in a top conference (BCS) for several years and had nothing to show for it. UCF was in the BCS for exactly one season and won the Fiesta Bowl…and have been to 2 New Years bowls since.

USF was also in the best hoops conference at the time and also showed they couldn’t leverage it. Often losing to UCF while they were in C-USA.

USF really doesn’t deserve anything at this point.

Merrill Lynch, while you are right that USF has not won our conference, yet, we have consistently played and beaten Power 5 schools. Including wins at Notre Dame and Auburn. We have beaten beaten both Miami, FSU, South Carolina, UNC, among other Power 5 teams.

As far as basketball goes, we struggled for a big between the Seth Greenberg days and the Brian Gregory days we have now, where we just won the CBI tourney.

LOL UCF doesn’t even have the advantage over USF head to head. (6-4) have had a winless season(2015). have a losing bowl record.

while UCF was beating up on the likes of Tulsa in Conference USA. while USF played Big East teams now mostly P5 teams competed and won.

You guys keep your list the AAC will keep beating your paper teams.

It’s so funny how people focus on wins and losses for entrance into the Power 5. If that was the case Boise would have been added a long time ago. It’s all about money and how much value (in dollars) you can add to the conference. Why do ya think Rutgers got added when one of these AAC teams got passed over?