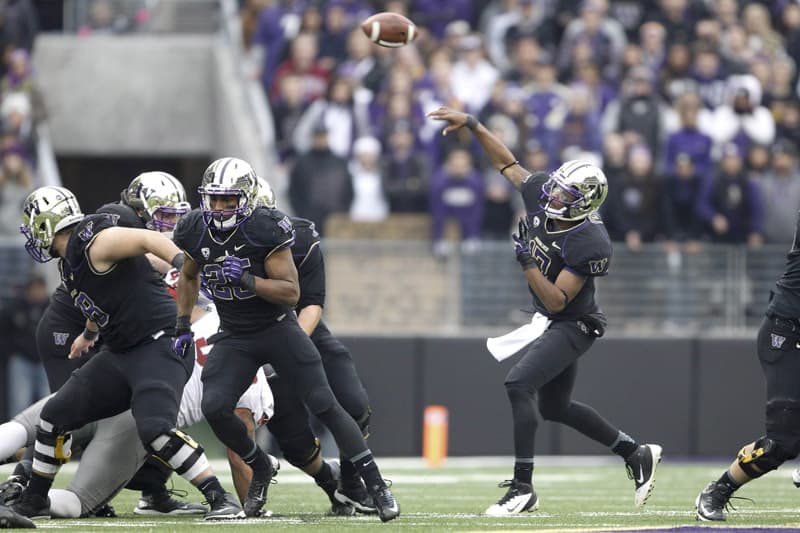 I recently addressed 5 SEC squads that should be pretty ashamed of their non-conference schedules. With a non-conference quartet consisting of Temple, UMass, Charleston Southern, and Old Dominion, the Vanderbilt Commodores easily clinched the top spot for the most shameful SEC non-conference slate.

(Also, don’t forget to check out our review of the 5 weakest 2014 Big Ten non-conference schedules while you’re here.)

The Cardinal are coming off an unprecedented 5-year stretch consisting of five straight bowl games, four BCS appearances, and no fewer than 11 wins in each of the past four seasons. While expectations are high once again down on The Farm, Stanford fans can’t be too thrilled at the club’s non-conference slate – especially at home.

FCS opponent UC Davis makes the short drive south to open up Stanford’s 2014 season on August 30. After an early season conference showdown at home versus USC the following week, Army’s option-happy offense comes to Palo Alto for the first time since 1979. Although the Black Knights put up a decent battle at home last year before the Cardinal pulled away 34-20, expect a defense that gave up 31.6 points per game last year to be overwhelmed by Stanford’s massive offensive line.

It only took coach Mike Leach two years to take the Cougars bowling for the first time since 2003. His squad was poised to knock off Colorado State in the New Mexico Bowl until a stunning series of 4th quarter turnovers resulted in a 48-45 loss.

Leach and returning quarterback Connor Halliday look to improve upon a passing game that pumped out 368 yards of offense in the air last year. There should be plenty of room in opposing secondaries during matchups versus non-conference foes Rutgers (81st in points against in 2013), Nevada (104th in points against in 2013), and Football Championship Subdivision’s Portland State.

Hawaii makes its first of three appearances on the list thanks in part to a miserable 2013 season that saw the Rainbows winless until a 7-point win during the final week over Army.

Oregon State will travel to the Big Island after an opening week tussle versus Portland State. It does bear mentioning that the Beavers opened up 2013 with a devastating 49-46 home loss to Eastern Washington, but it’s hard to believe they could overlook an FCS opponent two years in a row. The non-conference schedule does improve a bit when 2013 bowl winner San Diego State comes to town on September 20.

First-year coach Mike MacIntyre won as many games in his first season (4) as his predecessor Jon Embree did in 2011-2012 combined. Part of this was due to a non-conference schedule featuring two FCS schools, which resulted when Colorado and Fresno State were unable to reschedule a postponed contest.

The non-conference slate isn’t much better in 2014. After Colorado’s traditional opening season tilt versus rival Colorado State, the Buffs travel to Gillette Stadium to take on what many believe is the 128th – or dead last – ranked team in all of college football: UMass. Two weeks later, on September 20th, Colorado takes on a Hawaii team that could neither move the ball on the ground on offense or stop opposing teams from doing so on defense last season.

One of two teams utilizing the Hawaii Exemption, Washington finds itself as the only Pac-12 squad playing four non-conference opponents. Ironically, FCS foe Eastern Washington might prove to be the Huskies biggest challenge.

After flying across the Pacific Ocean to face Hawaii during Week 1, Washington returns home to play three straight non-conference home games. On September 6, an Eastern Washington squad that defeated #25 Oregon State in 2013 and made it all the way to the FCS semifinals comes to town with nothing to lose. This matchup is followed by teams that pretty much did nothing but lose in 2013: Illinois managed only four wins while Georgia State struggled mightily in the post-Bill Curry era en route to an 0-12 season.

After looking at the PAC-12 OOC schedule, there is not much difference then the SEC OOC, PAC-12 plays 9 Conference games while the SEC tries to make up the 9th Conference game with a big name opponent. Bama vs W Virginia, Florida vs FSU…etc….

You, sire, are an idiot. Everyone of these teams is playing a road away game. Road games are hard in college football. Also, most of the Pac 12 plays a power 5 team on top of a 9 game schedule. Go back to Bama or wherever the hell you’re from, marry your cousin, and start making trolls instead of being one.

Not this year, sonny!

When you say “the SEC tries to make up the 9th Conference game with a big name opponent’ you only list two examples. Why? Two programs do not make up the SEC, therefore the statement above has no rationale. The following six SEC programs have no ‘big name’ opponent on their 2014 schedule.

On the flipside Georgia has two strong opponents (Clemson and GT). Where each of the remaining six programs play one strong opponent and three relatively weak opponents.

The point being making a general blanket statement about an entire conference OOC schedule most often fails. One must evaluate each programs entire schedule individually when comparing programs with three game OOC schedules with those playing 4 OOC games.

Utah playing home to Idaho State and Fresno State has to be in the conversation. Their other game is against Michigan.

Except Utah will lose to Fresno St.

Fresno will take it to utah. utah will start 1-2 and be lucky to have 3 wins on the season. PAC added utah just to pad the schedule of other teams. Just look at how well it has worked across the board in all sports.

This is a pretty funny thread. Bob and Ray were wrong.

@therise2top
Those are some weak schedules. UW schedule had more to do with the departed coach.
Good luck at usc.

Nice to see that the Huskies are finally taking a page out of the Quack playbook. Play soft, play often.

LMAO at those who thought Utah would lose to Fresno State. In what universe did you expect that to happen?

Washington Huskies have been the KIng of weak schedules in the Pac 12 for years.
Their nonconference basketball games are all cupcake teams, and they play them all at home.

Sad, but true. We can always go back and watch the 1990-1992 games. 2015 is going tombe along year @ Washington with more losses, more no shows in the stands and no,crappy n3rd tier bowl to go to and lose.

P.S. their is always Crew ,

Hey Scott Woodard! What gives? Nothing but crap non league games till 2020 and then only one decent game a year? What is the story? Seattle is too far to travel but Berkley is not? FCS kings is the new UW mantra. Crappy home schedules mean unsold tickets. I know, everyone is afraid to play the UW, especially after their last 15 years of dominance (yuk yuk).
Wow, no game with Montana since 1951 and then 2 in 4 years. Washington gets North Dakota , not even North Dakota State. Your ABC theory of scheduling has become BCDor BDD. It is important to always have a 7th home game, so that you can always have al least 2 and possibly 3 crappy homes now that Colorado is in the Pac12. No wonder season ticket sales are falling.?

Where are the defenders of Washington’s crap schedules? Trade UCLA/USC evey year for Utah and Colorado and add in 1-2 FCS games and Rutgers and BYU. What a way to man up and pay Petersen 3.8 million a year.