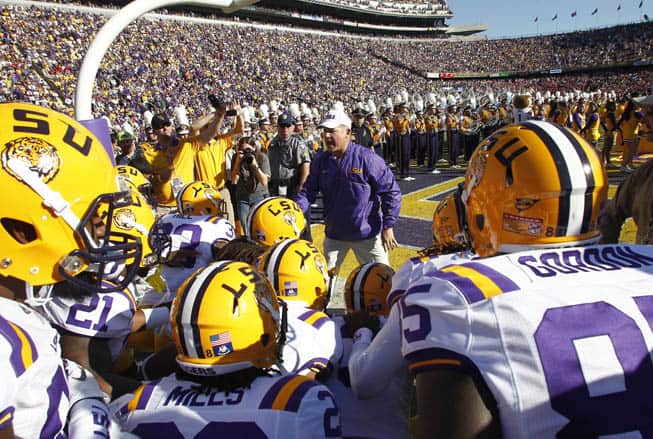 It’s hard to believe but the start of the college football season is finally here. 235 days after we last saw Alabama wax Notre Dame in the BCS National Championship, it’s time for a new season of shocking upsets, blowout victories over FCS squads, last-second field goals and unbelievable plays by Heisman hopefuls.

All season long we’ll get you ready for football Saturdays by taking a look at the 5 most anticipated games of the weekend. We’ll break down why the games matter, what to look for, and why you won’t want to get off your couch until that final gun sounds. We’ll also try to give you some games that are flying just under the radar but should prove to be just as compelling as any top 10 match-up.

The opening night of college football features 17 match-ups from coast to coast. The ESPN double header is pretty solid, and it’s tempting to put Ole Miss at Vandy (9:15 p.m. ET, ESPN) on here to see how the Rebels deal with all the off-season media buzz; it’s just as interesting to see if the Commodores can get off on the right foot on their quest for a third straight bowl game.

But I’m a sucker for Head Ball Coach. He’s one of the few coaches worth listening to during those otherwise useless interviews before halftime. The biggest question mark for Steve Spurrier is the quarterback situation where both Connor Shaw and Dylan Thompson plan to see action. On the other side of the ball, the Tar Heels tackles and running backs will have to find some way to at least slow down Jadeveon Clowney to give senior quarterback Bryn Renner time to throw.

Because of the stellar slate of games Saturday night, the Bulldogs versus Cowboys match-up earlier in the day in Houston isn’t getting as much love as it should. Oklahoma State comes into the game ranked 13th in the country and was picked by the media to win the Big 12. While a loss to Mississippi State obviously doesn’t ruin the Cowboys Big 12 championship aspirations, it certainly would shake the confidence of Mike Gundy’s squad. Expect to see senior Clint Chelf and sophomore J.W. Walsh split time at quarterback against a Bulldogs defense that finished in the middle of the pack nationally in total defense last year at 387 yards per game.

One can only image what Virginia Tech starting quarterback Logan Thomas must be thinking as he leads his young squad into the Georgia Dome to take on the two-time defending national champions. Thomas showed signs of brilliance last season, but he also threw 16 interceptions to only 18 touchdowns. A few early INTs against Alabama’s farm-system-for-the-NFL defense and you won’t have to worry about missing the start of the Georgia/Clemson game due to a close contest in Atlanta.

Far and away, this is the best game of week 1: A top 10 battle that doesn’t take place on a neutral site between schools located only 80 miles apart. Georgia travels to Death Valley with a #5 ranking to take on an 8th-ranked Tigers squad that many are picking to play in only their second BCS game.

Aaron Murray and a Bulldogs offense that returns eight starters look to begin their quest of a BCS Championship. It’s going to have to come at the expense of equally talented Clemson QB Tajh Boyd who scorched opponents last season for nearly 4,000 yards and 36 touchdowns. Get comfortable, grab a cold one and some snacks, and don’t touch the remote.

With Georgia and Clemson potentially on the big screen, point your computer to ESPN3 to catch another great game, this time between LSU and TCU. It will be interesting to see how the Tigers cope with losing a whopping eight defensive players to the NFL draft. Just as intriguing is how returning – but often struggling QB – Zach Mettenberger fares against a Horned Frogs defense that returns almost half of its starters (although Devonte Fields – the Big 12 defensive player of the year- won’t suit up due to a suspension).

Texas A&M vs Rice – 2nd half, after Johnny Foosball sleeps off that hangover!

Aren’t you a stripper in Birmingham? Could swear I’ve seen you before…. Go Bruins! Here’s to Californis seceding from the Union.

you mean after he is eligible to play? since he was penalized for signing autographs for money? lol not a hangover. he should be in WAY more trouble.

How about Ohio State and Michigan! GO BUCKS!!