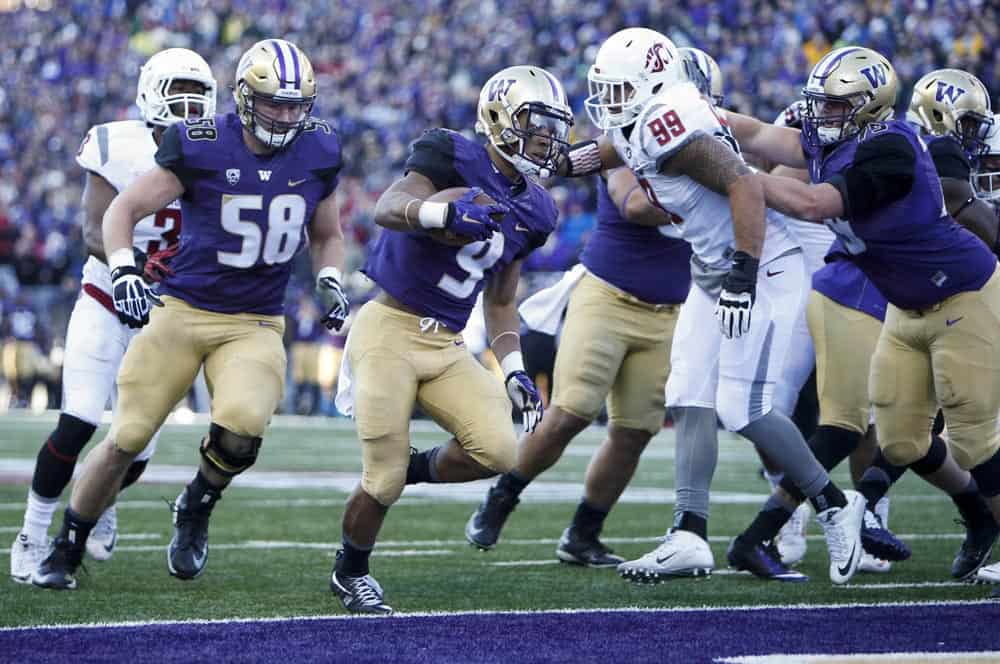 Breaking it down; Tuesday night features three MAC games, Wednesday night is devoid of any action, Thursday evening has one game, Friday is stacked with 14 games, and Saturday offers up 43.

As luck would have it, with five, it’s also the week with the most ranked vs. ranked action this season. Tune in Friday afternoon to see (5) Washington at (23) Washington State for a meaningful Apple Cup. On Saturday things crank up early in the Noon EST time slot with the game of the weekend- (3) Michigan at (2) Ohio State. In the midafternoon its (13) Auburn visiting (1) Alabama and at night its (22) Utah at (9) Colorado and (15) Florida at (14) Florida State.

When you add in all the rivalry games, it’s a football feast worthy of Thanksgiving weekend.

This week’s “Hardware Up for Grabs” section is epic – and lengthy – just like my first marriage. Though it highlights 20 games, it’s not a complete listing of the rivalry games being played in Week 13. Instead, it’s an accounting of which games have an official physical award associated with it.

The only schools with byes in Week 13 have regular season action remaining next week, except for Army, which finishes in two weeks’ time with its traditional finale with Navy.

Tune in next week for the 411 on Week 14 – the balance of regular-season action in the Big 12 and Sun Belt and the eight conference championship games that will decide who is in, and out, of the third-ever College Football Playoff.

Minnesota and (6) Wisconsin first played 126-years ago in 1890 and they clash for the 126th time this Saturday in Madison. They’ve only missed playing once – in 1906 – a game canceled by President Theodore Roosevelt, “who had decided to cool off heated college rivalries, because of injuries and deaths on the field.”

That very first game – a 63-0 win for Minnesota – was played on November 15, just 14 days before Army and Navy met for the first time on the gridiron in West Point, New York.

MOST-LIKELY WEEK 13 WINNERS BASED ON HISTORY (FBS vs. FBS only):

The Apple Cup wasn’t born until 1962, “in honor of Washington State’s delicious and iconic apples.” Originally, the Huskies and Cougars played for their version of a Governor’s Trophy. If you measure the rivalry in Apples only, Washington has won 38 Cups vs. Washington State’s 16.

Introduced just last season, the Battle Line Trophy outlines the states of Arkansas and Missouri as they would appear on a map. Crafted primarily of silver, it weighs in at a hefty 180 pounds and is nearly seven feet tall including its base. It’s also the natural continuation, geographically, of the Golden Boot, the traveling prize for the Arkansas-LSU series. Ironically, both trophies were designed by Arkansas student-athlete David Bazzel.

Established in 1996, the Commonwealth Cup is another whopper – four feet high and weighing in at 100 pounds. It’s roomy enough for the scores of every previous game between the two programs to be listed on its base. Since it was introduced, Virginia Tech has won 17 Cups vs. Virginia’s three.

Though perhaps less-well know than the mini cannon that Illinois and Purdue play for, the Fremont Cannon is a beast. Dating back to 1970, the weapon is a full-size reproduction of the howitzer used by John C. Fremont as he headed west to Nevada in 1843. It cost $10,000 and was manufactured by the Kennecott Copper Corporation. Unlike many rivalry prizes, the Fremont dates all the way back to the beginning of the series, so the all-time record also reflects the number of cannons won.

Dating back to 2009, the Gansz Trophy honors coach Frank Gansz, a highly regarded, longtime special teams coach in college and the NFL. Gansz played at Navy from 1957-59, was an assistant coach there from 1969-72 and was the special teams coach at SMU from 2008 until he passed away in 2009. Navy has won the Gansz four times, SMU is yet to win the award.

Awarded to the winner of the Egg Bowl, the Golden Egg was introduced after the 1926 game in Starkville, when the underdog Ole Miss team scored an unexpected 7-6 win over then Mississippi A&M. Zealous Rebel fans stormed the field after the game, rushing towards the goal posts only to be beat back, with cane chairs, by State fans. The incident was so ugly that the student bodies decided to present a trophy after the next game “in a dignified ceremony designed to calm fans.”Ole Miss has collected 55 Eggs vs. Mississippi State’s 28.

Awarded to the winner of the Sunflower Showdown, Kansas’ version of the Governor’s Cup was first presented in 1969. The two teams have played consecutively since 1911 and from 1902-39 played for an earlier award called the Governor’s Trophy. K-State has won 26 Cups vs. Kansas’ 20.

The Governor’s Cup – Kentucky at (11) Louisville – series started in 1912 – tied at 14 games apiece but Louisville has won five straight.

The Heroes Trophy was introduced in 2011, Nebraska’s first season in the Big Ten. The name was chosen with the intent of honoring one Iowa citizen and one Nebraska citizen for an “extraordinary act” prior to the playing of each game. Thus far, the Huskers have won three prizes vs. the Hawkeyes two.

Dating back to 1948, the trophy presented to the winner of the Iron Bowl was the brainchild of the Alabama and Auburn chapters of Omicron Delta Kappa, a national leadership honor society. In January 1978, it was dedicated to Dean James E. Foy V as he retired as the Dean of Student Affairs at Auburn. Prior to taking on that role in 1950, Foy had served as the Assistant Dean of Students at Alabama. The Crimson Tide have won 40 ODK’s vs. the Tigers’ 28.

Not to be confused with the Shillelagh Trophy (presented to the winner of Notre Dame-Purdue), the Jeweled Shillelagh is a foot-long Gaelic war club made of oak or blackthorn from Ireland – said to be the only woods tougher than an Irish skull. The jewels are either ruby Trojan heads or emerald shamrocks, each inscribed with a year and score of a game, the stone used signifying which team won. Though the original Shillelagh was introduced in 1952 (and replaced in 1989 after it ran out of room), the medallions go back to the start of the series in 1926.

The Land Grant dates back to 1993, when Penn State joined the Big Ten and renewed its series with Michigan State, who it hadn’t played since 1966. The name honors the fact that both schools (founded just 10 days apart in 1855) were “pioneer land-grant schools in the nation.” The trophy features landmarks from each campus as well as the team’s mascots. Penn State has won 13 Land Grants vs. Michigan State’s seven.

First introduced in 2009, the Land of Lincoln, which depicts Abraham Lincoln’s iconic hat, was the result of an online contest for both schools’ fanbases. The two teams played for the Sweet Sioux Tomahawk from 1945 to 2008, but it was retired “out of respect for Native American Nations.” Northwestern has won the new award four times vs. Illinois’ three.

Dating all the way back to 1925, the Old Oaken Bucket was the brainchild of an alumnus of each school, charged with the task of finding a traveling trophy. The duo struck gold at Bruner Farm, where an old bucket, now the Old Oaken Bucket, hung from a well. The first game played for the prize ended in a 0-0 tie, which explains why the bronze “IP” is attached to the Bucket’s handle. This led to a bronze “I” or “P” being linked to the trophy for each team’s win ever since. So far, 58 “P’s” have been attached vs. 30 “I’s.”

Established in 1948 by fraternities at both schools, the Old Wagon Wheel honors the Mormon move westward in the mid-19th century, done in covered wagons. BYU has won the Wheel 39 times vs. Utah State’s 23.

The Palmetto Bowl Trophy – South Carolina at (4) Clemson – series started in 1896 – Clemson leads 67-42-4 and has won the last two. Before that South Carolina won five straight.

The Palmetto Bowl Trophy replaced the Hardee’s Trophy in 2015, it also marked the first time the state of South Carolina’s rivalry game had an official name. No. 1 Clemson (a 20-point favorite) narrowly beat unranked South Carolina, 37-32, for the first-ever Palmetto Trophy last season.

Paul Bunyan’s Axe, introduced in 1948, was preceded by a wood-crafted Slab of Bacon, awarded to the winner beginning in 1930. The tradition of “bringing home the bacon” was halted in the early 1940s when the slab went missing (it was found in 1994 in Madison). Recorded on the handle of Bunyan’s Axe are the winners of every game since the series began. Wisconsin has taken possession of the Axe 41 times vs. Minnesota’s 24.

Awarded to the winner of the Civil War, the Platypus Trophy may have the best backstory of any prize in college football. Sculpted (but never officially finished – it’s missing its feet) by Oregon art student Warren Spady, it was introduced in 1959. Oregon State won the first-ever Trophy game and then retained it until 1961 when it disappeared, not to be uncovered again until 2006. It was reintroduced in 2007, also the last time the Beavers won. The Ducks finally took possession of the Platypus in in 2008 – it’s been in Eugene ever since.

The Territorial Cup – Arizona State at Arizona – series started in 1899 – Arizona leads 48-40-1 but ASU has won three of the last four.

Last but not least we have the Valley Trophy, a giant “V” established in 2013 to “acknowledge the rivals that represent the Silicon Valley and San Joaquin Valley, respectively.” To date, San Jose State won the “V” twice vs. Fresno State’s one win in 2014.

In order to capture its first-ever Pac-12 South division title and advance to the conference championship, the Buffaloes must do something they haven’t achieved in 59 years – win at home vs. Utah.

The Wolverines have lost seven straight games in the Horseshoe, last winning there 16 years ago. That Michigan team was ranked No. 19 coming into its annual grudge match with then No. 12 Ohio State. The Wolverines won 38-26, finishing the regular season 8-3. They went on to beat No. 20 Auburn in the Citrus Bowl and finish No. 11 in the final AP.

In this week’s head scratcher, Rice holds an all-time advantage in its brief series with Stanford. The two haven’t played since 1964, a win for Stanford. The Owls won the first three (1957, 1958 and 1963), the first and last in Houston and the middle in California.

Texas A&M has never beaten LSU as an SEC team

Best ‘xx Things’ column of the year, thanks Amy!

Glad San Jose State managed to eek out a win over the Mutts of Fresno State. That said,we new a new Head Coach.