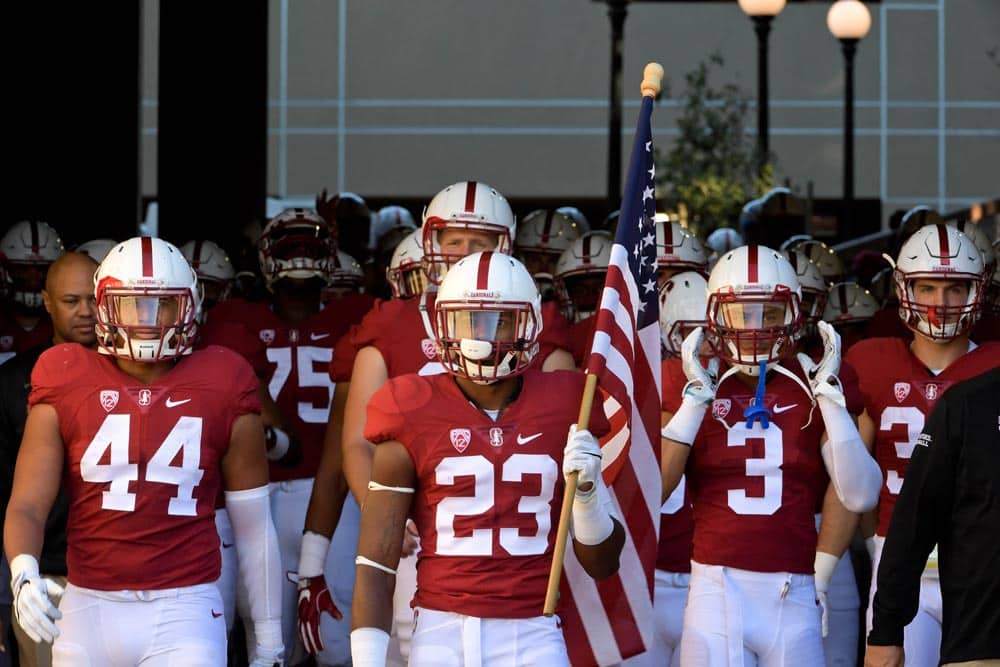 Week 5 of the 2016 college football schedule features 62 games, two apiece on Thursday and Friday and a full state of 58 on Saturday.

Contests featuring an FBS school taking on an FCS institution are down to only three, the lowest of the year and just 5% of the week’s offering.

Byes drop from the whopping 17 in Week 4 to only 7 this week, meaning 95% of the FBS programs are in action.

The last conference to kick-off league play in 2016, the MAC, features its first five league games this weekend. The official start is slated for Saturday at 2:30pm EST when Ohio University travels across the state to play rival Miami (Ohio) in Oxford.

Ranked vs. ranked contests match last weeks’ total of four. The Pac-12, Big Ten, SEC, and ACC all have two ranked teams clashing, meaning the races in those Power leagues will be clearer by the time sun comes up on Sunday.

Three of the four blockbuster games feature Top Ten teams squaring off, don’t forget that the first—(7) Stanford at (10) Washington—is slated for Friday night at 9pm EST on ESPN.

Following is a grand sweep across the landscape that is Week 5. As always, the facts are unique to this week and are limited to FBS vs. FBS action.

NC State and Wake Forest meet this Saturday afternoon for the 110th time in history. The series dates back to 1895 and the two have met every year since 1910. NC State has a dominating 65-38-6 lead all-time, but has split the last 10 with Wake.

Duke and Virginia first squared off 126-years ago in 1890. The first two games were played in Richmond, Va., just 29 years after the city was named the capital of the of the Confederate States of America. Virginia leads the all-time series 34-33, but has only beaten Duke twice in its last eight tries.

5: Nevada has won 5 straight over Hawaii.

MOST-LIKELY WEEK 5 WINNERS BASED ON HISTORY (FBS vs. FBS only):

The Bronze Boot – Wyoming at Colorado State – series started in 1899 – Colorado State leads 59-44-4 and has won three straight – referred to as “The Border War.”

The trophy, a bronzed jump boot worn by Colorado State alum and Vietnam veteran Jeff Romero, Sr., dates back to 1968. The two schools’ ROTC detachments meet at the Wyoming/Colorado border each year after the game with the game ball, the school hosting the next season’s game running the ball back to its stadium.

Dating back to 1972, this is the first leg of the three-game series between Army, Air Force and Navy. The Falcons didn’t start playing football until 1956 and in the 13-years before the trophy only played Army and Navy a combined 10 times. The Commander-in-Chief was created to ensure that the three academies met annually.

With 19, Air Force owns the most trophies, Navy is second with 15 and Army is last with 6. Either the Falcons or Midshipmen have won the last 19 awards.

The Shula Bowl and Trophy kicked off in 2002, the first year the two schools, only 60-miles apart, met on the football field. FAU first fielded a football team in 2001, FIU followed in 2002.

The Governor’s Victory Bell – Minnesota at Penn State – series started in 1993 – Penn State leads 8-5, its loss last season was the first since 2004.

Founded by the governors of the states of Minnesota and Pennsylvania in 1993, this version of a victory bell was unveiled for the first-ever game between the two, on Sept. 4, 1993. It was also the inaugural Big Ten contest for Penn State.

Awarded since 1950, legend has it that the Spittoon was originally purchased at a Lansing antique store by Michigan State grad Gene McDermott. Why did he buy it? Well, “in order to avoid a letdown in the game against Indiana just a week after knocking off rival Notre Dame.”

An actual trophy as opposed to an actual weapon, this travelling prize honors the cannons that both schools traditionally discharge on game days. It was first awarded in 2008.

The game is also the first leg of the three-pronged Michigan MAC Trophy, awarded to the annual victor in the Central Michigan/Eastern Michigan/Western Michigan series.

Auburn has NEVER lost to a Sun Belt team

On the line in Auburn’s Saturday afternoon clash with Louisiana-Monroe is its 23-0 record vs. the current membership of the Sun Belt.

The last time the Illini won a game in Lincoln, Calvin Coolidge was president and the first-ever Winter Olympics were held in the French Alps.

Illinois went 6-1-1 in 1924, just one year removed from a perfect 8-0 campaign that included a Big Ten title and a National Championship.

Kentucky has NEVER won at (1) Alabama

The Wildcats have faced the Crimson Tide on the gridiron since 1917 and never in the 39-game series have they managed a road win.

The only other meeting was the 1978 Liberty Bowl in Memphis, a game Missouri won 20-15.

Oklahoma State has dropped 8 straight to (22) Texas in Stillwater

The last time the Cowboys beat the Longhorns in Boone Pickens was 19-years ago in 1997. It’s also the only time they’ve ever pulled it off, owning a 1-8 record vs. Texas at home.

1997 was the second season of the then fledgling Big 12. Oklahoma State finished 8-4 while the Longhorns went 4-7, at the time their worst mark since 1988.

The Boilermakers’ Saturday afternoon date in College Park isn’t only their first game there, it’s the first time they’ve ever faced the Terrapins in the regular season and their first-ever Big Ten meeting.

The Mountaineers have dropped five straight to the Wildcats, their only win all-time coming 86-years ago in Morgantown.

I don’t know how someone researches facts like this…it’s certainly deeper than simple Googling. Props, Amy.