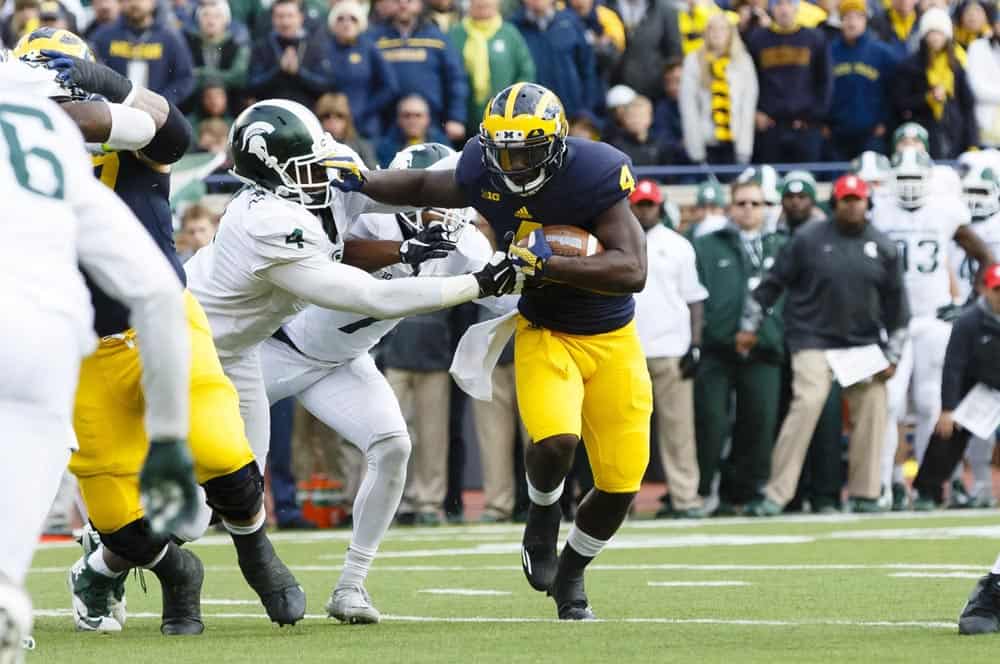 Week 9 of the college football schedule means that there are only five full weekends remaining in the 2016 season. A lot like my first marriage, it’s going way too fast.

For the third week in a row there are three ranked vs. ranked matchups. Each features an undefeated Power Five team (there are only seven remaining) hitting the road to face a Top 20 opponent. Two of the three have dropped at least three straight at their destination, see the Fun Facts for more details.

Byes are up to a season-high 22 this week, a number that includes five ranked teams.  FBS vs. FCS games drop from three to two with only Mississippi State (vs. Samford) and UMass (vs. Wagner) playing down a level.

All-in-all there are 54 games, the lowest total of the season: five on Thursday, three on Friday and 46 on Saturday.

(2) Michigan and Michigan State play for the 109th time this Saturday. The two have met consecutively since 1945, missing 1943-44 due to World War II. The Wolverines played through the wartime years, but the Spartans canceled their 1943 season due to a lack of available players. MSU returned to the gridiron in ’44 but played only six games.

If Michigan State were to manage a huge upset this weekend it would be only the second time in history that it’s won four straight over Michigan. The first came from 1934-37, all four wins occurring in Ann Arbor.

Interestingly, the two schools only met in East Lansing three times from 1915-1957, the other 38 games all played at Michigan Stadium.

(2) Michigan-Michigan State and Illinois-Minnesota both kicked off 118-years ago in 1898. Even though Michigan went 10-0 that season, winning the Western Conference title, Harvard (11-0) and Princeton (11-0-1) are recognized as the national champions.

MOST-LIKELY WEEK 9 WINNERS BASED ON HISTORY (FBS vs. FBS only):

First presented in 1953, the Paul Bunyan was donated by then Michigan governor Gerhard Mennen Williams to honor Michigan State’s inaugural season in the Big Ten. All-in-all, the trophy is a whopping nine-feet tall, featuring Bunyan standing with one foot on each side of the state, each school’s flag claiming it’s half.

Established in 2009 by the student governments of both schools, the Okefenokee is a 10-foot long oar, carved from a 1,000-year old cypress tree in the Okefenokee Swamp. Covering nearly 700 square miles, the swamp straddles the Florida-Georgia state line.

Seven years later, the Gators have taken home the oar four times vs. the Bulldogs three.

Rather than being an active entity, the Saddle Trophy is missing in action. It dates back to 1961 when the Lubbock Avalanche Journal and the Fort Worth Star-Telegram hooked up to honor the yearly winner. It was part of a move to brand the rivalry as “The West Texas Championship of the Southwest Conference.”

Texas Tech didn’t join the Southwest Conference until 1960 while TCU had been a member since 1923. The Saddle was in use until 1970, when it mysteriously disappeared. At that time, each school had won the traveling prize five times apiece.

There has been a push to resurrect the Saddle since TCU joined the Big 12 in 2012.

The Black Knights have had six opportunities to knock off the Demon Deacons in Winston-Salem and have fallen short each time. Though the two teams have met 15 times since 1945, they didn’t play at Wake Forest until 1990. That’s been the venue six out of the last nine games, all wins for the Deacons.

Boise State travels to Wyoming this Saturday and then hosts San Jose State next Friday night, both teams it has never lost to.

Kansas State and Iowa State play for the 100th time

Not only have the Wildcats and Cyclones met 99 times previously, they’ve played every single year since 1917. It earns the series a place in the Top Ten of the longest consecutive rivalries in college football.

Iowa State leads all-time 49-46-4 but K-State is on an eight-game winning streak. If the Wildcats can stretch their run to 11, it will mark the longest win streak in series history.

The 2007 win was Lloyd Carr’s final season at Michigan. It was also the last time the Wolverines were ranked in the Top Five—that is until Week 2 of this year.

The ’07 team came into the season at No. 5 in the AP before free-falling out of the rankings after their shock-the-world loss in the opener to then FCS Appalachian State.

The last time the Cornhuskers left Madison with a win was in 1966, the same year they went 9-2 and finished No. 6 in the final AP. Nebraska reeled off nine straight wins that season only to drop its last two games at Oklahoma (10-9) and then vs. No. 3 Alabama (34-7) in the Sugar Bowl.

Yet another serial road loser, Northwestern hasn’t won in Columbus since 1971, suffering 45 years of defeats since. Not only did the ’71 Wildcats beat No. 16 Ohio State, they capped off the season with a win over No. 19 Michigan State.

One has really not talked about Boise St this year even though they are undefeated, playing Wyoming will not be easy. Wonder if they will run the table & if they do not really sure if they will make the CFP.

They more then likely will not unless Wazzu finishes Top 25 (Whom Boise beat week 2) BYU finishes 8-4 (not even sure that is still possible) and their championship game in the MWC is against a ranked opponent, which I haven’t the foggiest how likely that is, but usually someone over there appears to be decent before a larger school raids their coach. SDSU seems the most likely. They’d also need conference champions to be chugging along with 2+ losses, which is honestly not out of the question this year in the slightest. I believe every P5 conference is sitting on an undefeated, BUT they seem to all be hanging onto a single undefeated or so.

The biggest issue, I feel, is this isn’t quite the caliber of Boise State team that was phenominal with everyone making excuses why they weren’t good. It’s funny that college grad “intellectuals” make reference to their stadium size as if that has ANYTHING to do with how good the team playing there is. These guys are legitimately just getting by mediocre competition. Now if this same team was “just getting by” in the SEC East would they be in consideration? Sure. And not that I would agree with that either. But they just don’t look that great. They run out of gas in the 2nd half, they are prone to making mistakes, and they appear to lack depth.

Boise’s starters seem like they could play against anyone else’s starters, but once the subs come in and the rotation is in full swing, there is an obvious drop in productivity. I don’t think they have the depth ( and possibly the coaching) to be any sort of threat if they squeaked into the playoffs by chance and would be a gimme game for their first opponent.

NOTE: I never actually said they have no business playing in the playoff. If it’s a choice between a 2-loss B10 team and an undefeated Boise, Boise should get it everytime in that scenario. I just don’t think they have the same ability quite yet and need some consistent recruiting finding great players under rocks like Coach Pete could (who has been criticized for under recruiting at Udub and look at them…….stars mean absolutely nothing and that guy has proven it at two schools now)