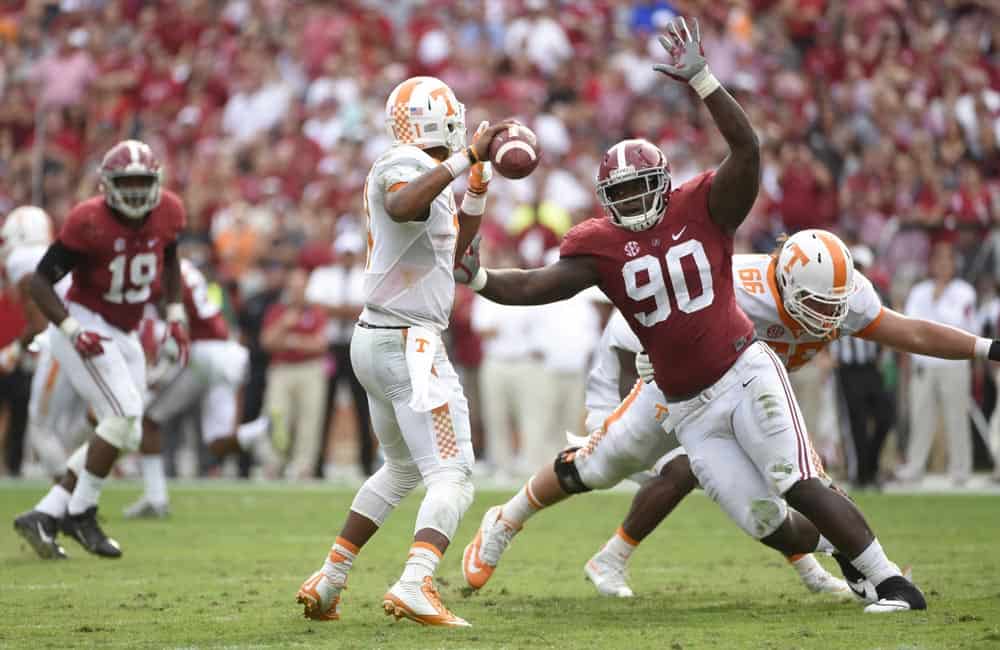 Week 7 of the college football schedule means we’ve already passed the halfway point in the season. On tap are 55 contests, the least amount of total games this year and down one from Week 6. One game is slated for Wednesday night, four on Friday, and 49 on Saturday.

Byes are at a season high 18, one more than the 17 in Week 4 and two more than last week’s 16. Among those teams taking a break are Michigan, Texas A&M, and Washington, all members of the latest AP Top Ten.

After finally disappearing off the schedule completely last week, one FBS vs. FCS game sneaks back in this Saturday as Army hosts Lafayette.

Ranked vs. ranked games are down one from the four we’ve enjoyed the past four weeks, but No. 1 and No. 2 are in action and both play Top Ten opponents with one loss. As far as when you need to be in front of a screen – (1) Alabama at (9) Tennessee is in the 3:30pm EST time slot on CBS and (2) Ohio State at (8) Wisconsin is slated for 8:00pm EST on ABC.

Enjoy the following tip toe through the tulip field of Week 7. As always, the 411 is unique to this week’s schedule and limited to FBS vs. FBS action.

The first game between the two was played on Nov. 28, 1901 in Birmingham just months after President William McKinley was assassinated at the Pan American Exposition in Buffalo, NY. In October, Vice President Theodore Roosevelt, who had assumed the presidency, renamed what had been previously called the “Executive Mansion” the “White House.”

Georgia and Vanderbilt first clashed on the gridiron in 1893. It was only the third season of football for the Bulldogs and the fourth for the Commodores.

MOST-LIKELY WEEK 7 WINNERS BASED ON HISTORY (FBS vs. FBS only):

The I-75 Trophy replaced the 31-year old Peace Pipe Trophy in 2011. The two schools are located only 30 minutes apart, a quick trip on Interstate 75 in northwestern Ohio.

The Legends Trophy honors the first-ever game between the Cardinal and Irish – the 1925 Rose Bowl, a game Notre Dame won 27-10, earning it its second national title. Counted among the legendary that day were Knute Rocke, the Four Horsemen, Pop Warner, and Ernie Nevers.

The “Battle for the Old Oil Can” debuted in 2011, the winning entry in a contest aimed at naming the rivalry and establishing a traveling trophy. The antique can (purchased to replicate the original), commemorates “the discovery of an old oil can from Fresno (circa 1935) that was supposedly recovered during a San Diego State campus building project.”

The Textile Bowl Trophy dates back to 1981, a “part of a joint marketing effort by the textile commissions of both North Carolina and South Carolina…State and Clemson boast two of the largest, most respected textile schools in the country and have similar academic missions.”

Texas-Oklahoma isn’t the only college football game scheduled for the Texas State Fair this season – it’s one of three.

Prairie View A&M and Grambling kicked things off on Oct. 1 in the State Fair Classic, the Red River Showdown was featured last weekend, and this Saturday its Air Force and New Mexico in what’s being called the Air Force Classic.

New Mexico has never played in the postseason in the historic Cotton Bowl, while for Air Force it’s been 57-years since it pushed TCU to scoreless tie in the 1959 Cotton Bowl. It was only the third season ever for Falcon football, a 9-0-2 finish that included a No. 6 rank in the final AP poll.

(11) Baylor has never lost to Kansas in Waco

Though Kansas lost its last three appearances in Waco by an average of 40 points, only four total points separated the two teams combined in their 2002 and 2006 meetings.

Colorado and Colorado State both have a chance to make history

Two of the three FBS teams hailing from the Centennial State have an opportunity to post historic firsts in Week 7. Combined, the Buffaloes and Rams are 0-12 against this weekend’s opponents – Colorado 0-7 vs. Arizona State and Colorado State 0-5 vs. (15) Boise State.

According to OddsShark.com, the Buffs have the substantially better chance of snapping their all-time streak.

Prior to this Saturday, the only other time the Terrapins and Golden Gophers have met in football was in the 1977 Hall of Fame Classic.

Maryland won the game 17-7, the fifth of six bowl consecutive bowl seasons stretching from 1973-78. For Minnesota, it was only the third post-season appearance in program history and the first since 1962. The Gophers would have to wait seven seasons before going bowling again, beating Clemson in the 1985 Independence Bowl.

The 4-1 Wolfpack finally leave North Carolina state lines this weekend for a clash with (3) Clemson. It’s also one of only three out-of-state games for NC State, the balance coming next Saturday at (7) Louisville and a Week 11 trek to Syracuse.

Pitt hasn’t won at Virginia since 1953

Pitt finished 3-5-1 in 1953 while Virginia skidded to a 1-8 mark, its first losing season in 10 years and the most losses it had ever suffered since it first hit the field in 1888.

The last time the Hokies and Orange squared off both were Big East members. That was 2003, Virginia Tech’s final season before fleeing for the ACC, Syracuse wouldn’t follow until 2013.

The two schools played each other consecutively from 1992-2003. Syracuse leads the all-time series 9-8 but Virginia Tech has won three of the last five.

The Broncos are ranked No. 24 coming into Saturday’s clash at Akron, where they’ve only lost once in history.

The only other voter recognition Western Michigan has ever received came in 1982, when they went 7-2-2 and earned a No. 16 rank in the final NCAA Division I-AA poll.

Pres McKinley was shot on Sept 6th and died Sept 14th. Doesn’t affect the game, but wouldn’t have if it was in Oct. Weird!