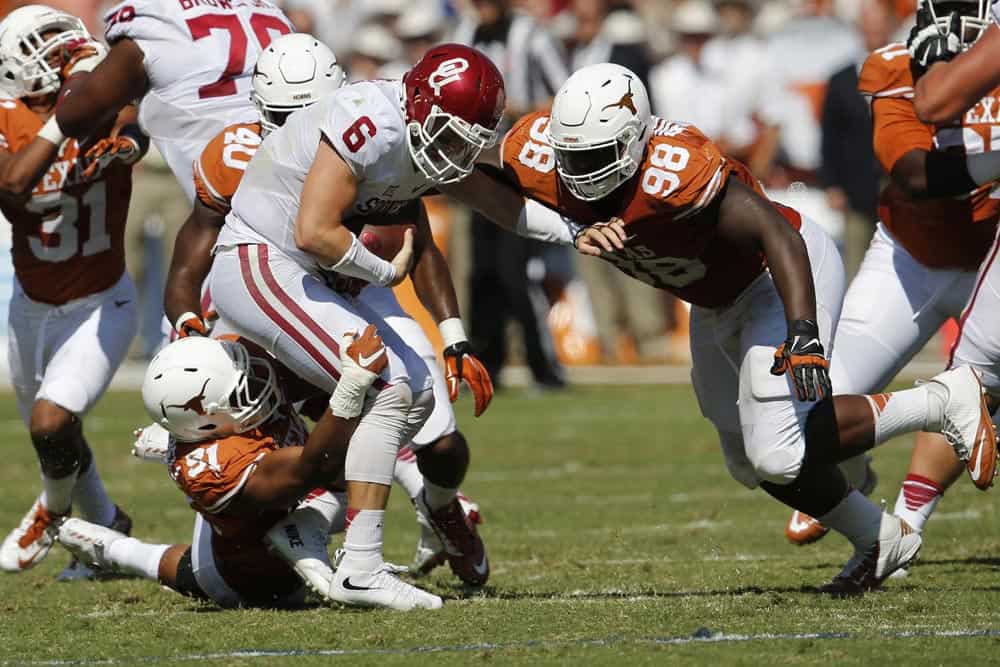 With 56 games on tap, Week 6 of the college football schedule offers up fewer contests than any week thus far in 2016.

It’s also the first with a Wednesday night game – Georgia Southern at Arkansas State at 8:00pm EST on ESPN. That leaves two games on Thursday night, four on Friday and a season-low 49 on Saturday.

Sixteen teams enjoy a bye in Week 6, including six members of the latest AP Top 25 rankings. It’s the biggest number of byes since Week 4 with 17.

It’s also the first week without any FCS opponents on the slate, meaning that everything on offer is FBS level football.

Non-conference action is down to a mere four games total, a number which amounts to each of the four independent schools (Army, BYU, Notre Dame and UMass) taking on an FBS foe.

Enjoy the following trek through the fact field of Week 6. As always, it’s unique to this week and limited to FBS vs. FBS action.

Along with double-dipping the Sooners in 1901, the Longhorns also played Houston High School (who they beat 32-0) and Kirksville Osteopath (who they fell to 48-0). Known as the “O” eleven, the medical school team also knocked off Missouri, Nebraska, and Wisconsin during a run that lasted from 1899-1928. The institution itself is still alive and well, and teaching, in Missouri.

Purdue and Illinois first squared off on the gridiron 126-years ago in 1890. For the Illini, the game was one of only three that season, the other a home-and-home with Illinois Western. For the Boilermakers, it was the year before—in 1891—they would capture their first-ever football title, winning the Indiana Intercollegiate Athletic Association. It was the first of four consecutive IIAA crowns, a run that included a perfect 12-0 mark from 1891-92.

10:  USC has won 10 straight over (21) Colorado (the Buffaloes have never beaten the Trojans).

MOST-LIKELY WEEK 6 WINNERS BASED ON HISTORY (FBS vs. FBS only):

The tale of the Cannon stretches back over 100 years ago, to 1905 when Purdue students brought the scaled-down firearm to Illinois with hopes of firing it off after a win. Illinois fans found the weapon, hidden near their stadium, and captured it. It was retained by one of the Illini students involved in its confiscation until 1943, when he offered it up to be used as a traveling trophy.

The Floyd of Rosedale – Iowa at Minnesota – series started in 1891 – Minnesota leads all-time series 62-45-2, but Iowa has won three of the last four.

A strong contender for the best name among the college football awards, the Floyd of Rosedale is a bronze statue of a pig honoring an actual pig. The original animal was the price of a 1935 bet on the game between Minnesota Governor Floyd Olson and Iowa Governor Clyde Herring. The pig, a prize hog, hailed from Rosedale, Iowa.

The Golden Gophers won the game 13-6.

Awarded to the annual winner of the Red River Showdown, the Golden Hat dates back to 1941 when the Texas State Fair presented it to the rivalry. Originally called the “Bronze Hat,” it was upgraded to the gold standard in 1969. According to Lost Lettermen, it’s also never been stolen, lost, broken or vandalized.

The O’Rourke-McFadden dates back to 2008 and is named in honor of the two All-American quarterbacks who played in the first-ever clash between the two schools, the 1940 Cotton Bowl. Clemson’s “Banks” McFadden led his Tigers to a 6-3 win over Boston College’s “Chuckin’” Charlie O’Rourke.

The loss was the last-ever in O’Rourke’s collegiate career, the next season he led BC to an 11-0 record and a national championship, the only in school history.

Auburn and Michigan both play their first road games

After five consecutive home games to kick-off the season, the 3-2 Tigers and 5-0 Wolverines finally hit the road in Week 6. Auburn makes the trek to Starkville, Miss. to play Mississippi State while (4) Michigan travels all the way to Piscataway, N.J. to face Rutgers.

It’s been almost a century since the Yellow Jackets suffered a loss at Pittsburgh, of course it doesn’t hurt that they’ve only played there once since – in 2014. The 56-28 win that year is also their only road win all-time vs. the Panthers, also falling there in 1918 and 1919.

The defeat was Georgia Tech’s sole misstep in 1920, finishing 8-1 and capturing a piece of the Southern Intercollegiate Athletic Association championship. As for Pitt, still an independent, they went 6-0-2 under then coach Pop Warner.

The only time the Irish and Wolfpack have ever met on a football field previous to this weekend’s game was the 2003 Gator Bowl. No. 11 Notre Dame fell 28-6 to No. 17 NC State that New Year’s Day, capping off an 11-3 season for the Wolfpack including a No. 12 rank in the final AP poll.

It marks the highest win total in program history and the second-highest final ranking, just after the No. 11 finish in 1974.

Like Notre Dame and NC State, the Volunteers-Aggies football series has been limited to postseason play. The two schools hooked up for the 2005 Cotton Bowl and the 1957 Gator Bowl, both losses for Texas A&M.

All told, the Aggies have only scored once against the Volunteers in history, a 5-yard touchdown pass from Reggie McNeal to Earvin Taylor with 5:13 to go in the fourth quarter of the 2005 Cotton Bowl. Tennessee won that game 38-7.

It’s been 19 years since a ranked Huskies team faced an unranked Ducks squad. Washington went 8-4 that season, ranked No. 4 in the opening AP and finishing No. 18 after beating No. 25 Michigan State in the Aloha Bowl.

Oregon was completely out of the rankings in 1997, going 1-4 during the regular season vs. Top 25 opponents. The only win over a ranked team, a 31-28 shocker, came versus, guess who? No. 6 Washington.