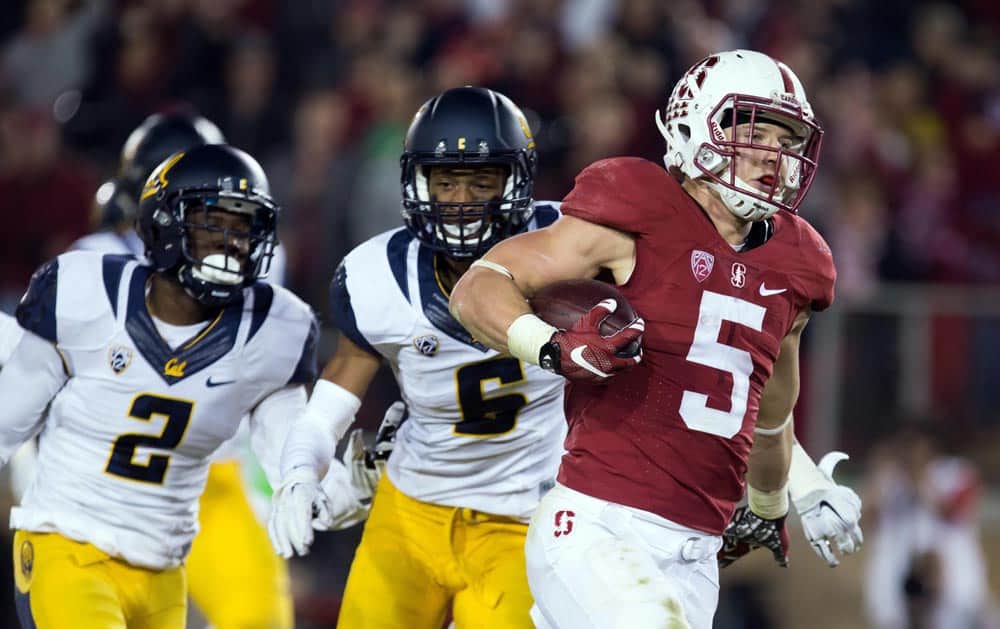 Week 12 of the college football schedule features a whopping 65 games, the most we’ve enjoyed since Week 3’s 67 contests.

The increase is due to a combination of byes dropping to five (every Power Five team is in action this week) and FCS games rising to six (the most since Week 4).

This is the week the SEC takes somewhat of a breather, four of its members facing FCS foes (No. 1 Alabama, No. 15 Auburn, Kentucky, and South Carolina) and an additional two (Georgia and No. 25 Texas A&M) playing opponents from the Sun Belt and Conference USA.

That leaves Arkansas (at Mississippi State), Missouri (at No. 19 Tennessee) and Ole Miss (at Vanderbilt) playing Power Five foes.

Then there is (16) LSU and (23) Florida, who were scheduled to play South Alabama and FCS Presbyterian respectively, but instead will square off in Baton Rouge. More details on that game can be found in the Fun Facts section.

Also worth noting is the number of first-ever meetings, at four it’s the most since Week 4. Included are Power programs Nebraska-Maryland and Notre Dame-Virginia Tech, hitting the gridiron together for never-seen-before action.

Don’t forget to tune in on Thursday night (8pm ET, ESPN) for (5) Louisville at Houston. Though it isn’t as juicy as it looked back in September, it still ought to be a battle and one of the best games of the week.

(24) Stanford and Cal play for the 110th time this Saturday in Berkeley. The two campuses are just 50 miles apart, Cal to the north and Stanford to the south. The entirety of the series has been played within California state lines and all but 14 in either Stanford or Berkeley. The exceptions are the first thirteen games (1892-1903), all in San Francisco, and the fifteenth game (1905) in Palo Alto.

If the Cardinal manage a win this weekend, it will mark seven straight victories over the Golden Bears, tying their longest winning streak in the series, a seven-game stretch from 1995-2001. Cal’s best run came in a six-game streak from 1919-23.

Stanford-Cal, Minnesota-Northwestern, and Purdue-Wisconsin all kicked off in 1892. It was the same fall that, on Nov. 12, William “Pudge” Heffelfinger was paid to play in a football game.

Heffelfinger, an All-American at Yale, received $500 from Pittsburgh’s Allegheny Athletic Association to play in a single game vs. the Rival Pittsburgh Athletic Club. It was the first time in history a football player accepted money in exchange for participation.

The Pro Football Hall of Fame credits the transaction as the “birth of professional football” and Heffelfinger as the first pro player in the sport’s history. Pudge went on to serve as a congressman from his home state of Minnesota.

MOST-LIKELY WEEK 12 WINNERS BASED ON HISTORY (FBS vs. FBS only):

The Anniversary Award dates back to 1985 when the alumni associations of both schools established a traveling prize to commemorate the 75th anniversary of each institution. Both were founded in 1910 in northern Ohio – Bowling Green in the west and Kent, 150 miles to the east.

The Falcons have won 23 Anniversaries vs. the Golden Flashes’ seven.

Awarded to the winner of the Big Game, the tale of the Axe is about as storied, and sorted as possible. It dates back to, of all things, a series of baseball games between the two schools in 1899. That’s when the Axe was purchased, “probably from Sears” by Stanford fans and painted red. During the three-game series, Cardinal enthusiasts used the Axe to chop up a variety of Cal related items, including beheading a scarecrow wearing school colors. After Stanford blew a late lead in game three, Cal fans stole the Axe.

After spiriting it back to Berkeley, Cal held on to the prize for 30 years. That’s when, in 1930 a group of Stanford students referred to as the “Immortal 21” by their school and the “Immoral 21” by Cal, stole the Axe back.

One of a handful of bells awarded in FBS rivalries, USC-UCLA’s Victory Bell dates back to 1939 when the UCLA Alumni Association gave the bell, a massive 295-pounder off a locomotive, to the school. The Bruins rang the bell after each football score for two seasons until 1941, when USC fans stole the bell during the season opener.

After a series of shenanigans, USC and UCLA signed an agreement before the 1942 game to award the bell to the winner of the cross-town rivalry. The recipient gets to paint the bell’s carriage its school colors, which the Trojans have done 42 times vs. the Bruins’ 31. Four games (1944, 1958, 1971 and 1989) ended in a tie.

Not only have the Hoosiers lost 20 straight to the No. 3 Wolverines, they’ve dropped 18 straight road games, last winning in Michigan Stadium 49 years ago.

That was the same year Indiana last won the Big Ten, posting a 9-2 record that included a 14-3 loss to No. 1 USC in the Rose Bowl. The Trojans went on to win National Championship while the Hoosiers finished ranked No. 4 in the final AP, a tie for the highest mark in program history.

Kansas finished 3-6 in ’38 and 3-5-2 in ’01. The ’01 team was coached by John Outland – the namesake and founder of the Outland Trophy. He also played at Kansas and established the prestigious award believing that inside linemen deserved more recognition.

In a game that was originally scheduled for Week 6 in Gainesville, the Tigers and Gators meet this Saturday in Baton Rouge.

The original game was delayed because of Hurricane Matthew and the reschedule highly contested. LSU’s strong stance to play the game at home, replacing a visit from South Alabama, may wind up to be fortuitous as the Tigers are 4-1 hosting Florida since 2006 vs. 2-3 in Gainesville.

Missouri has NEVER lost in Knoxville

The Tigers have played the Volunteers twice in Neyland Stadium, winning on both occasions. The first came in 2012, Mizzou’s inaugural season in the SEC and the second in 2014. The Tigers won the two games by an average of 5.5 points.

The ’47 Oklahoma State squad, members of the Missouri Valley Conference, posted a disappointing 3-7 record. The only other wins were at Kansas State and at Temple. It only played two league games that season, Drake and Tulsa, both losses.

The last Washington team to beat ASU rose as high as No. 8 in the AP after beating then No. 10 Stanford on Nov. 3. They went on to lose the next week at unranked Oregon State. After rebounding with a win over No. 9 Washington State the following Saturday, the Huskies suffered back-to-back losses to No. 1 Miami (Fla.) and No. 9 Texas (in the Holiday Bowl) to close out the season. They finished 8-4, ranked No. 19 in the final AP.