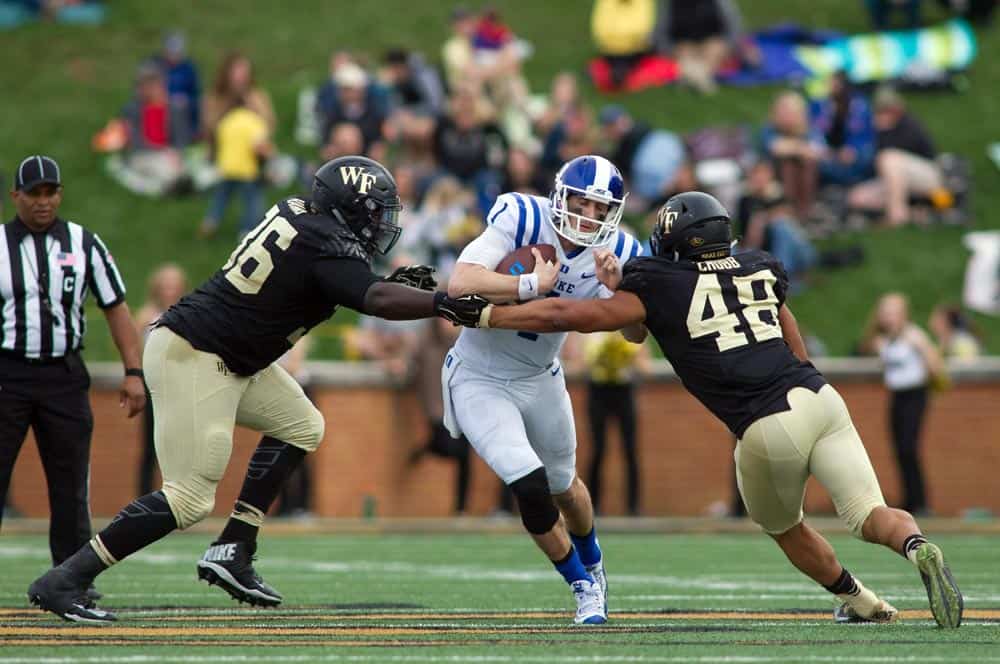 With the NFL kicking off this Thursday, college ball abandons that night all together and instead plays just two games on Friday night and a whopping 73 on Saturday (a 16-game increase vs. Week 1). It’s the only full week of the 2016 season without a Thursday night matchup.

Games featuring FCS opponents are down from Week 1’s 46 to 29. Though that’s a healthy reduction, 39% of Week 2’s games still include a team from the lower level.

Power vs. Power games drop from 14 last week to 12 this week and conference games rise from two to six. The American Athletic (Navy-UConn) and Sun Belt (Georgia Southern-South Alabama) both kick off league play this week.

Following is the 411 on Week 2. As always, the facts are unique to this week and are limited to FBS vs. FBS action.

Penn State-Pittsburgh and Duke-Wake Forest both meet for the 97th time in history this weekend.

Duke and Wake Forest first met 127-years ago, in 1889. The two teams played twice that year, in May (a Demon Deacon victory) and again in November (a win for the Blue Devils).

29: Florida has won 29 straight over Kentucky.

MOST-LIKELY WEEK 2 WINNERS BASED ON HISTORY (FBS vs. FBS only):

The Razorbacks and No. 15 Horned Frogs meet this Saturday night in Ft. Worth for the first time since Oct. 5, 1991. That was Arkansas’ final season in the old Southwest Conference, migrating to the SEC in 1992.

Auburn, which hosts Arkansas State on Saturday night, has never lost a game to a current Sun Belt school.

All-time the Cardinals are 3-4 vs. the Hoosiers meaning that Saturday afternoon’s game in Bloomington could get Ball State to .500 in the series.

One of Saturday’s late-night games, Cal travels to San Diego State where it has lost in all three of its previous appearances, in 1995, 1994 and 1983.

On the flip side, the Golden Bears are a perfect 4-0 vs. the Aztecs in Berkley, the most recent game there last season.

The No. 13 Cardinals’ Friday night trip to Syracuse is the only road action any Top 25 school will face this week.

No. 7 Stanford and No. 12 Michigan State both have the week off while the rest of the ranked field plays at home.

Another lopsided series, Conference USA’s Middle Tennessee is 3-1 all-time vs. SEC Vanderbilt and 3-0 vs. the Commodores in Nashville.

Penn State and Pitt play for the first time since 2000

After a 16-year break, Penn State and Pitt renew their 89-game rivalry this Saturday at high noon in Pittsburgh.

More than just the next unique venue for a college athletic event, No. 17 Tennessee vs. Virginia Tech at 180,000 seat Bristol Motor Speedway is set to smash the all-time single-game college football attendance record.

The current record stands at 115,109, the number of people who packed into Michigan Stadium to see Michigan beat Notre Dame back in 2013. Projected attendance at Bristol this Saturday night is in the neighborhood of 150,000.

It’s not the first time college football has been played at a NASCAR venue as Bethune-Cookman (located in Dayton Beach, Fla.) beat Florida A&M, Mississippi Valley State, Savannah State and Alabama A&M at Daytona International Speedway during the 1974-75 seasons.

The Cavaliers travel to Eugene, Oregon this weekend for a Saturday night clash with the No. 24 Ducks. The game could earn Virginia—which has fielded a football team since 1888—it’s first-ever win vs. a Pac-12 foe.

But, those series were played just prior to Boise State’s meteoric rise. The Broncos didn’t move up to the FBS ranks until 1996 and though they didn’t earn any love in the AP the first six years after the move (1996-2001), they’ve earned mention in at least once in every season since.

The two teams renew their friendship late Saturday night on the blue turf on ESPN2.

I like these articles, good job Amy.
I find it funny that Virginia has never beaten a Pac-12 team, may be the reason the Pac-12 keeps scheduling them.
Nice to see Pitt vs Penn St again & I hope Vandy can get out of this slump over the Blue Raiders.
If the Bristol game goes well, be sure to know that it will be a annual thing but well really need to be two power house traditional teams to fill it up.

Virginia along with Tennessee and Vanderbilt are among the few P5 east coast and/or south programs which will agree to play a home-and-home with top P5 west coast programs (e.g. P12 Stanford, Oregon, USC).

But for the most part the ACC refuses to fly over the Mississippi. BC-USC series completed last year. After the Virginia-Oregon series, the only two future ACC-P12 series are on the schedule (Cal-NC, Colo-GT). Clemson will not come west.

Your SEC defenders will talk about playing 8 tough league games as a justification for not traveling too far for a home & home. Tough teams like Vandy, Kentucky-loser to Southern Miss @ home, Tennessee and Arkansas near losers @ home to other G5 teams, MIssissippi St. loser to 7 year G5 program South Alabama, LSU and Missouri (at least they went on the road) losers to unranked teams. What more can you say? SEC stalwarts want a minimum of 7 home games a year plus the top ones like Alabama want the money from the neutral site games. No home & home schedules for them or Florida-which hasn’t left Florida in over 25 years.

It amazes me that no matter what the SEC does it is never good enough for HATERS. They lost 7 games this past weekend you should all be happy!.If Auburn is playing Oregon in Dallas and home & home with Cal it shows they are at least doing something…DAMN. You say UVa plays west coast games why not do a little research, they have played 5 games against the pac 12 teams in over 100 years of football Come on Walker get more bullets before shooting your little pop gun

Georgia played a home-and-home with Arizona State. Missouri has never feared going on the road. A&M will go to UCLA next year. LSU has recently played at Washington. Vanderbilt will travel. Arkansas has played Texas, Rutgers and others in home-and-homes recently. So quit it. The SEC goes on the road often.

Another thing to consider it the need to travel? For a team like Clemson to play USC they fly over four dozen other Power 5 programs. There is no reason for them to travel that far to play USC when they could play Georgia, Auburn, Oklahoma or any number of other high profile games. These institutions aren’t working with an unlimited supply of cash. They try to limit expenditures, too. If you are Michigan State, you are going to have to travel to play someone out of conference. If you are Georgia, there are seven out of conference Power 5 schools only a state away. it’s simple.

Great article Amy! Keep em coming. I love articles like this. Love little known facts about teams. This is truely the best time of the year! Love college football!

Yes, I enjoyed the article. Now, we just need bowls that tie-ins the PAC-12 and SEC/ACC, and the nation will watch it every year.

Lopsided, yes. However, Vanderbilt is actually 13-3 all-time against Middle Tennessee. With that being said, they are also 11-3 in Nashville against the Blue Raiders.

You were only off by 36 points..
Plus you make the comment “but Ohio State meets some toughest teams later: #10 Wisconsin, #27 Northwestern, #26 PSU, #28 Nebraska, #12 MSU, #5 UM… then blows away #1 Alabama and #3 FSU in playoffs.”
Well, Northwestern is 0-2, Penn St just lost to Pitt, we will see what Nebraska is about this week versus the Ducks, Wisconsin, Mich St & Michigan, I will give you. But I doubt The Ohio State is blowing Bama or FSU away anytime soon.

It cost a lot of money for an SEC vs Pac-12 to play a home n home, cost to fly the team, coaches, band, boosters….hell, they’re are already losing money. Then to ask the fans to travel that far, I am not against it but no poor or middle class person is able to do that. I am not sure if one Virginia fan even showed up the Oregon game (joking). I will be a little bias & say that college football in the east just means a little more to fans then the west but you will still see (as we have in the past) SEC vs Pac-12 home n home & neutral site games, yet people still want someone to complain about that it is not happening, but it is.
Home n home games do not define college football, money & excitement do! If that was the case then Bama should play at W.Kentucky, The Ohio State should play at Tulsa, Oklahoma should play at La.Monroe ….etc
Hell, those stadiums don’t hold over 35,000 fans & once again, the same people that complain about home n home don’t even go to both of the games so what does it matter.