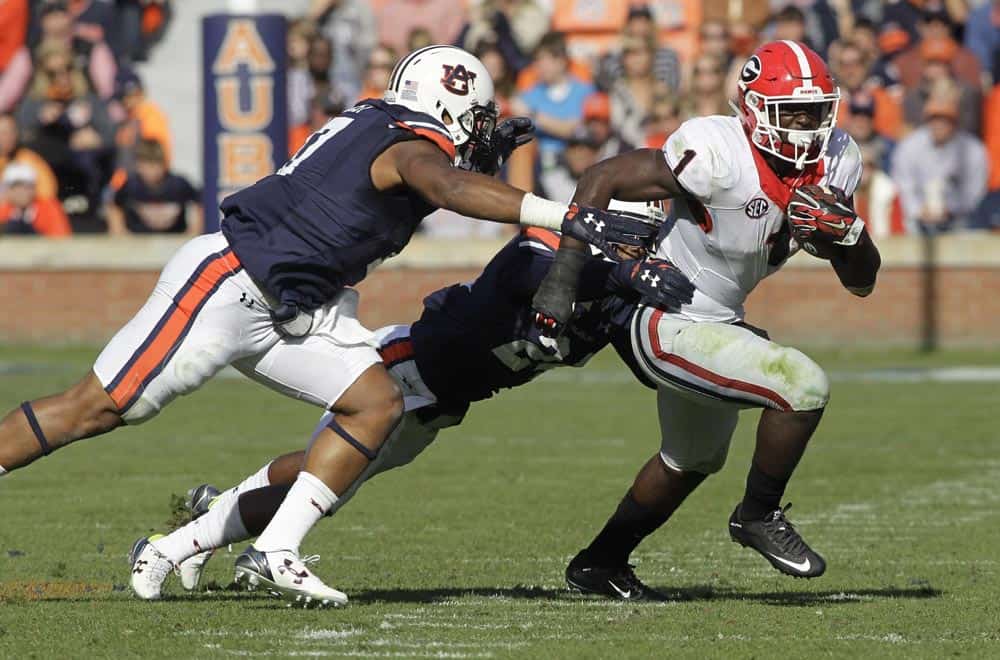 Matching Week 4’s total number of games, Week 11 of the college football schedule features 58 contests – two on Tuesday, two on Wednesday, three on Thursday, one on Friday and 51 on Saturday.

Byes are up three from last week’s eight to 11. The only Power teams taking a break are from the Big 12 (K-State and TCU) meaning every team from the ACC, Big Ten, Pac-12 and SEC will be in action.

FBS vs. FCS games are down to just one—BYU hosting Southern Utah on Saturday. It’s the fewest since Week 7.

Ranked vs. ranked action stays static at two – (24) LSU at (25) Arkansas and (20) USC at (4) Washington. Both are Saturday evening, the SEC game on ESPN and the Pac-12 contest on FOX. Don’t forget to tune in to (1) Alabama hosting unranked Mississippi State, fresh off upsetting Texas A&M last Saturday. It’s on ESPN at noon EST on Saturday.

Even more crucial, keep in mind that Week 11 means that there are only three full weekends of college football remaining on the slate.

Now’s not the time to stop watching.

(9) Auburn and Georgia play for the 120th time this weekend. The first 14 games were played in Georgia (10 in Atlanta and four in Macon), but the series didn’t move to Athens until 1912.

In total, only 31 of the 119 all-time meetings (or 26%) have been played in the state of Alabama. It makes the fact that Georgia leads the series by a mere single game (56-55-8) all the more fascinating.

Duke and (17) North Carolina first played 128-years ago on Nov. 27, 1888. Twenty-one days earlier, on Nov. 6, incumbent Grover Cleveland won the popular vote in the Presidential Election by 100,000 votes but lost to Benjamin Harrison who had a 65-vote advantage in the Electoral College.

Cleveland would be back, four years later, in 1892, when he beat Harrison both popularly and electorally, securing the only non-consecutive terms as President in U.S. history. It was also the same year that the Auburn-Georgia and Illinois-Wisconsin (also a Week 11 matchup) played for the first time.

MOST-LIKELY WEEK 11 WINNERS BASED ON HISTORY (FBS vs. FBS only):

CUSA: Rice vs. Charlotte, Southern Miss vs. Old Dominion and UTEP vs. Florida Atlantic (all 1-0 all-time)

Heralded by some as the “best CFB trophy of the modern era” the $5 Bits of Broken Chair dates back to 2014 when Minnesota’s mascot and Nebraska’s fake coach exchanged words on Twitter. Basically, @GoldyGopher challenged @Faux Pelini to a “friendly wager” and the faux coach responded, “Ok how about if we win you give me $5, if you win I get to smash a wooden chair over your back.”

Though the series dates back to over 100-years ago, the Golden Boot (formed by combining the two states geographically) wasn’t introduced until 1996, Arkansas’ fifth season in the SEC. The trophy is a 24-karat gold whopper—four-feet high and weighing in at 200 pounds.

LSU has won the Boot 12 times vs. the Razorbacks’ eight.

The Ram-Falcon dates back to 1980 and, as advertised, is a bronze depiction of a Ram and Falcon squaring off atop a wooden base. Air Force has taken home the trophy 21 times vs. Colorado State’s 15.

One of a handful of bells that are awarded in FBS rivalries, the Victory Bell has been a part of the North Carolina-Duke rivalry since 1948. Established by a cheerleader from each school to “foster friendly relations and eliminate vandalism between the two neighboring schools” the Tar Heels have won the Bell 45 times vs. the Blue Devils’ 22.

In a brand-new controversy, the two schools have decided that cart which holds the Bell will now be permanently painted to honor both schools. Though this reportedly was the practice originally, for “decades” the winning team has painted the cart its shade of blue paint when it reclaims its prize. The last time that happened, in 2014 when the Tar Heels took the cart back from the Devils after a 45-20 win in Durham, Carolina players also painted the visitor’s locker room and Duke’s practice field.

The new practice of split painting the cart has not been well received by fans.

The eighth edition of the Shamrock Series, Saturday’s game between the Black Knights and Irish in the Alamodome counts as a home (or “home-away-from-home”) game for Notre Dame. The Irish began playing a home game at a neutral site in 2009, when they beat Washington State in, you guessed it, San Antonio.

For Army, it’s the second time this season it’s played in Texas – the first a 66-14 win over at UTEP in El Paso in Week 3. If the Black Knights manage a stunning upset over the Irish, something they haven’t done since 1958, they’ll be bowl eligible for the first time since 2010.

The only other previous meeting between Clemson and Pitt was in the 1977 Gator Bowl, a game the Panthers won 34-3.

Clemson came into that game ranked No. 11 in the AP, dropping to No. 19 in the final poll after losing 34-3 to No. 10 Pitt. For the Panthers, the win capped off a 9-2-1 finish and a No. 8 rank in the final AP under then first-year head coach Jackie Sherrill.

It was just one year after Pitt went 12-0 and won the 1976 National Championship in Johnny Majors’ final season at the helm.

Indiana has only beaten (10) Penn State once in history

The Hoosiers’ 2013 upset victory over the Nittany Lions snapped a 16-game losing streak dating back to 1993. That win came in Bloomington, also the site of this Saturday’s game.

Despite the loss to Indiana, Penn State managed to upend both No. 18 Michigan (in a memorable quadruple overtime game) and No. 14 Wisconsin (in the finale) that season.

Kentucky hasn’t won in Knoxville since 1984

The Wildcats have dropped 15 straight at Tennessee, last winning there 32 long years ago. It was the same season that Kentucky last managed a ranking in the final AP poll. Those Wildcats went 9-3 including a win over No. 20 Wisconsin in the Hall of Fame Classic, earning them a No. 19 finish.

It’s been seven seasons since the Cardinal and Ducks have clashed without either team being mentioned in the rankings. Since 2008, both teams were ranked four of the seven times they met, on three of these occasions (2010, 2011 and 2013) both were in the Top Ten.

Utah has dropped eight straight at in Tempe, last winning there during the nation’s bicentennial 40-years ago.

The Utes were in the WAC that season, finishing 3-7 with the additional wins coming over UTEP and New Mexico. Though it wasn’t pretty, it was a big improvement over the previous two seasons when they posted a combined 2-20 record.

Things weren’t much better for Arizona State (also WAC members) in ’76 – after receiving mention at No. 3 in the preseason AP the Sun Devils lost their first four games and finished 4-7. The high hopes were based off their 12-0 run the previous season, including a 17-14 win over No. 6 Nebraska in the Fiesta Bowl. They finished No. 2 in the AP that year, the national title going instead to 11-1 Oklahoma, who lost to unranked Kansas, but beat No. 5 Michigan in the Orange Bowl.

Its funny, Duke always has the oldest or longest series of the week.

Also a first ever meeting – S Utah at BYU