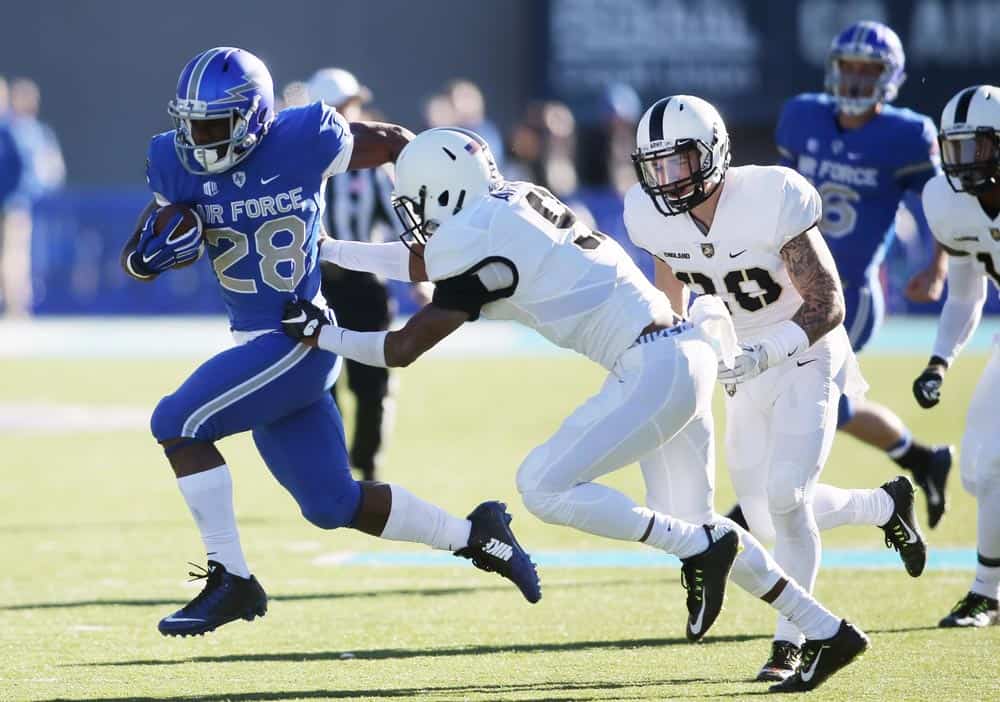 Week 10 of the college football schedule is stacked with 61 total games, the most on offer since Week 6. It’s also the first of four straight Tuesday nights of college football, all featuring MAC games.

Breaking it down – two games are on Tuesday night (both already played), one on Wednesday, four on Thursday, three on Friday and 51 on Saturday.

Ranked vs. ranked games are down from three to two, but they are whoppers – (1) Alabama and (6) Ohio State both facing Top 15 opponents who can’t afford another loss. Get your remote, picture-in-picture and/or secondary television cranked up because both games are slated for Saturday night at 8pm EST.

After averaging 18 since Week 6, byes are slashed to eight this week. The only Power teams not in action are from the Pac-12, meaning that all of the ACC, Big Ten, Big 12, and SEC schools are hitting the field.

FBS vs. FCS action stays static at two with only Tennessee (Tennessee Tech) and UTEP (Houston Baptist) playing down.

As a note, this week we’ll start using the CFB Playoff rankings as opposed to those from the AP, the first of which were released this Tuesday night.

(17) Baylor and TCU meet for the 112th time this Saturday. The series is tied at 52 games apiece (seven ended in ties) and the two have split the last four.

The Cavaliers lead the all-time series 34-14 but Wake won the last two.

MOST-LIKELY WEEK 10 WINNERS BASED ON HISTORY (FBS vs. FBS only):

An actual firearm, Bridger’s Rifle (a .50-caliber Rocky Mountain Hawken rifle) honors Jim Bridger, the “foremost mountain man in the history of the American West.” One of the first Americans to visit the territory that became Yellow Stone National Park, Bridger also is credited with discovering the Great Salt Lake.

For Utah State-Wyoming the tradition of “Bridger’s Battle” started in 2013, the winner of the rivalry’s name inscribed on the maple stock of the rifle. Thus far, the gun has only been in residence at Utah State.

The Chancellor’s Spurs were first awarded in 1996, both the first year of the new Big 12 conference and the first year that both Texas and Texas Tech had a university system chancellor.

Since then, the Longhorns have worn the Spurs home 15 times vs. the Red Raiders five.

The three-way contest between Army, Navy and Air Force, the Commander in Chief was established in 1972 to ensure that the newer Air Force Academy (which kicked off football in 1957) would play Navy and Army (both dating back to 1891) yearly.

Air Force’s 28-14 win over Navy in Week 5 this season means that a victory at West Point on Saturday would earn the Falcons their 20th Commander in Chief and their first since 2014.

Arkansas has NEVER beaten (11) Florida in the regular season

Not only have the Razorbacks dropped nine straight games to the Gators, they’ve only beaten them once in history – a 28-24 win the 1982 Bluebonnet Bowl in Houston.

(9) Auburn has NEVER lost to Vanderbilt at home

Did you know that Vanderbilt leads the all-time series with Auburn 21-20-1? Despite that, the Commodores have never, ever beaten the Tigers at Auburn.

The last time the Spartans lost in Champaign, George H. W. Bush (the elder) was President. The year was 1992 and MSU fell 14-10 to Illinois in the season finale.

Despite finishing 6-5-1 that season, the Illini also managed wins at No. 21 Ohio State and at Wisconsin. As for the tie, that was a 22-22 draw at then No. 3 Michigan

The Cornhuskers have had three chances to win a game in Columbus, Ohio and have fallen short on each occasion. The first two losses date back to 1955-56 when Nebraska hit the road in back-to-back seasons losing 28-20 and then 34-7. The most recent was in 2012 when the then No. 21 Huskers rolled into the Horseshoe only to get upended 63-38 by the No. 12 Buckeyes.

Nebraska’s only ever win over Ohio State came the year before, in 2011, also the Cornhuskers first season in the Big Ten. That game was in Lincoln, a 34-27 win over an Ohio State squad that would go on to finish 6-7 under interim coach Luke Fickell, bridging the gap between Jim Tressel and Urban Meyer.

Syracuse has NEVER beaten (2) Clemson in the regular season

The last time the Hokies left Durham, North Carolina with a loss was 35 years ago. That Virginia Tech team went 7-4 under Bill Dooley and allowed a mere 11.6 points per game, the sixth best scoring defense in program history.

Auburn and Vanderbilt didn’t play each other in regular season from 1951 to 1977. ( played in 1955 Gator bowl) . Alabama and Kentucky didn’t play each other from 1948 to 1971. If anyone from these schools or from the FBSCEDULES staff can search why these teams went 20+ years without playing I’d appreciate it. I understand non-permanent opponents go 6 to 8 years without playing .