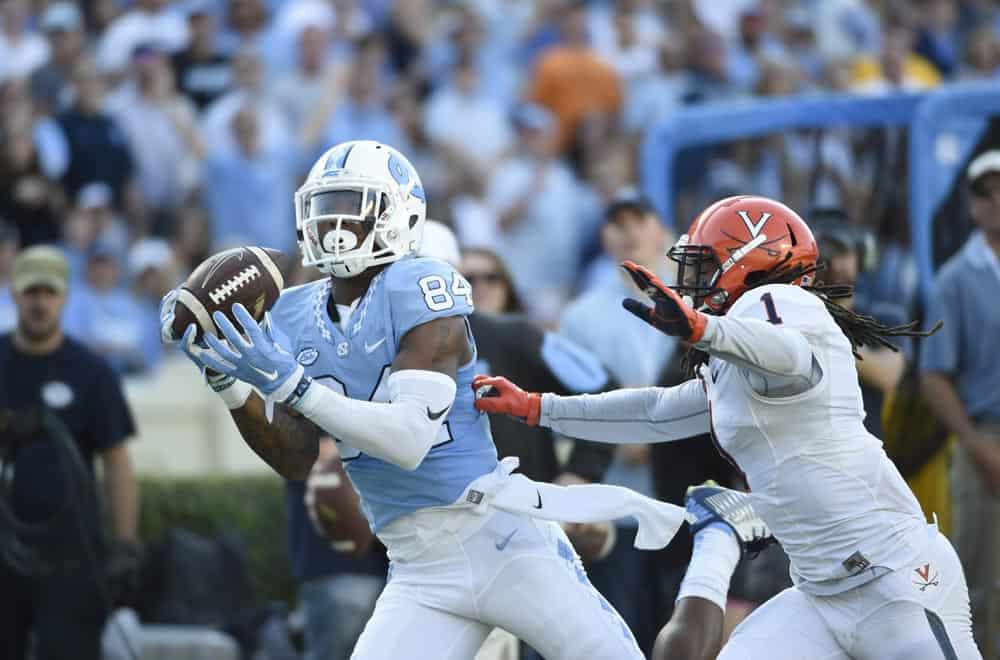 Week 8 of the 2016 edition of the college football schedule features three ranked vs. ranked matchups, all six teams representing a single division – the SEC West.

The blockbuster, must-see event is in Saturday’s mid-afternoon time slot on CBS when (6) Texas A&M visits (1) Alabama. It’s a game that ultimately may decide which team represents the SEC in the CFB Playoff.

All-in-all, Week 8 serves up 57 games, three each on Thursday and Friday night and 51 on Saturday. Byes are at 17, tying Week 4 for the second most this season. FBS vs. FCS matchups rise marginally to three, representing a mere five percent of the action.

Enjoy the following express tour though the Week 8 schedule. As always, the 411 is unique to this week’s schedule and limited to FBS vs. FBS action.

(22) North Carolina and Virginia first played 124-years ago in 1892. The two schools met twice that first season, in October in Charlottesville and again in November in Atlanta.

It was the same year that the first-ever night football game was played at the Great Mansfield Fair in Pennsylvania. It featured Mansfield State Normal College (Mansfield, Pa.) and Wyoming Seminary (Kingston, Pa.) in a 0-0 tie that only lasted several drives. The game was ended by the official, who deemed it “inconvenient to continue.” Not only was the lighting inadequate, the light pole had been installed in the center of the field.

The Tar Heel-Cavalier series includes a whopping 121 total games, North Carolina leads 63-54-4 and the two have met consecutively since 1919.

MOST-LIKELY WEEK 8 WINNERS BASED ON HISTORY (FBS vs. FBS only):

Established in 2015, The Belt is just that, a championship belt complete with football bling. It may be the best swag in college football. The two schools are located a mere 175 miles apart in southern Alabama.

The Heartland, a bronze bull, wasn’t introduced until 2004 when the two schools decided to honor their then 110-year old rivalry by offering a traveling prize. Why a bull? According to the Hawkeyes, it “symbolizes the kind of games that have been typical when the schools meet.”

Introduced in 1980, the Kuter Trophy is named for General Laurence S. Kuter, the first head of the Pacific Air Forces Command in 1957. “It is a striking tribute to the friendship between the schools and to the cooperation between the people of Hawaii and the Air Force.”

The Magnolia Bowl and its trophy wasn’t unveiled until 2008, after both student bodies participated in a “Name that Rivalry” contest via text. The original trophy was replaced in 2014 with a redesigned edition aimed at being a “better representation” of the rivalry.

After a 49-10 win over Central Michigan in Week 5, a Western Michigan victory on Saturday would earn the Broncos their third-consecutive Michigan MAC title.

At least five of this week’s series started in the 19th century.

These long-standing rivalries, in-conference games for the ACC, Big Ten, and SEC are among college football’s greatest treasures.

Indiana hasn’t won at Northwestern since 1993

The Hoosiers have dropped seven straight games in Evanston, last winning there 23-years ago. It was also the last time Indiana scored more than seven wins in a season, finishing 8-4 and rising as high as No. 17 in the AP poll.

Kansas State has won four straight over Texas in Manhattan

In a fact that can be filed under head-scratchers, K-State has knocked off the Longhorns the last four times they’ve visited Manhattan.

Tulane has never won a game at Tulsa

In the ultimate battle between colorful atmospheric forces, the Green Wave are 0-5 at Chapman Stadium, home of the Golden Hurricane.

The losses have all occurred since 2006 by an average of 30 points. Tulsa leads the all-time series 10-2.