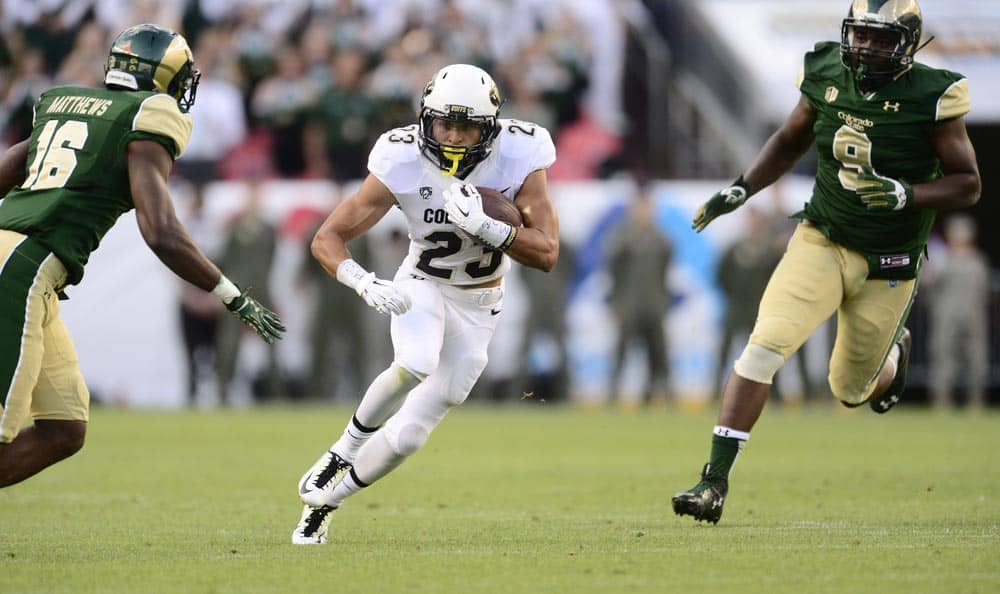 Week 1 of the 2016 college football schedule features 86 games with all but one of the 128 FBS programs in action.

Spanning across Labor Day weekend before the NFL kicks off on Thursday, Sept. 8, the collegians are set to play 16 games this Thursday, 11 on Friday, 57 on Saturday, one on Sunday, and one on Monday.

46 of the 86 games (53%) feature an FBS team squaring off with an FCS opponent. That leaves just 40 Week 1 contests pitting an FBS program against another FBS team.

Only 14 games are slated between Power Five programs, only two (South Carolina-Vanderbilt and Georgia Tech-Boston College) are conference games.

Take a look at a handful of vital stats related to this week’s schedule. All are unique to Week 1 matchups and all are limited to FBS vs. FBS action.

Marshall, the only program scheduled to play 12-consecutive games in 2016.

Colorado and Colorado State play for the 90th time on Friday, Sept. 2 (9pm EST). The Buffaloes lead the overall series 64-23-2.

Colorado and Colorado State first played in 1893 (though some sources date the first game back to 1890).

MOST-LIKELY WEEK 1 WINNERS BASED ON HISTORY (FBS vs. FBS only):

It’s also the ninth-ever college football game in Ireland, the most recent in 2014 when Penn State nipped UCF 26-24. The first dates back to 1988 when Boston College beat Army 38-24.

Clemson hasn’t won at Auburn since 1950

On tap for Saturday night, No. 2 Clemson will try to break its seven-game losing streak at Auburn.

Michigan has never lost to a Mountain West member

No. 7 Michigan hosts Hawaii in the early slot on Saturday, defending its 8-0 all-time mark vs. current Mountain West members.

The No. 22 Tar Heels and No. 18 Bulldogs meet late Saturday afternoon for the first time since the 1971 Gator Bowl. Georgia won that meeting in a 7-3 barnstormer, also its fourth-straight victory over UNC.

The Tar Heels’ most-recent win, 52-years ago, came during a 9-2 campaign, including a 35-0 win over Air Force in, ironically, the Gator Bowl. The ’63 Bulldogs posted a 4-5-1 record, well within the 20 worst finishes in school history.

On Thursday night, Wake Forest will try and beat Tulane for the first time in history. The Demon Deacons are 0-2 all-time vs. the Green Wave, the only two-ever meetings coming in 1995 and 1959.

Let’s not forget that LSU plays Wisconsin at Lambeau Field in Green Bay. Both head coaches are scared that the Lambeau Leap could result in penalties to the point that Les Miles wants to tell players that if they want a ride home with the team, to not commit the leap.

Digging this miscellaneous schedule info. Hope this is a weekly column.

It will be weekly.