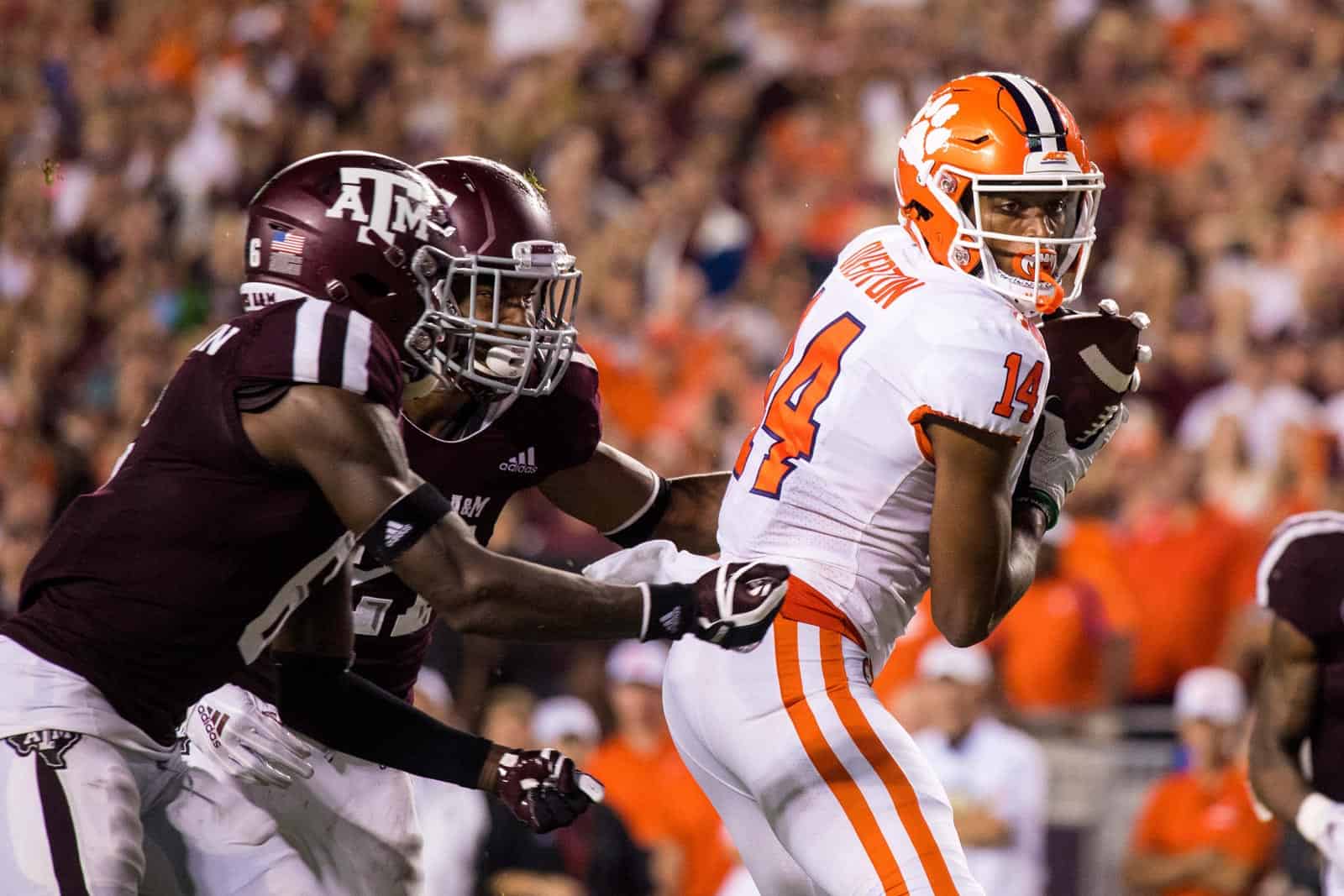 Welcome to Week 2 of 2019 SEC Football Predictions! This week’s schedule is not great top-to-bottom, but the two games at the top of the list are huge, not to mention a few other Power 5 vs. Power 5 matchups.

LSU heads to Austin to play Texas in a non-neutral site marquee matchup while Texas A&M leaves the Lone Star State to face Clemson… in CLEMSON! You read that correctly. The two marquee matchups of the week will take place at the college campus of one of the participating teams. Forgive me if I appear mad at neutral-site games. I’m not. I just believe college football is great when the games are played on a college campus. Preferably the campus of one of the two teams playing.

Enough chit-chat. Let’s get to predicting Week 2 of the 2019 SEC Football Predictions.

West Virginia is coming off a 20-13 win over James Madison in a game where the Mountaineers were out-rushed, 172-34. WVU won the very important turnover statistic, 3-0, and they’ll need to do the same against Missouri in an 11:00am local kickoff Saturday morning in Columbia, Missouri.

Missouri is coming off a 37-31 loss at Wyoming. They blew an early lead on the road and should perform much better at home at a much more normal sea level this week.
PREDICTION: Missouri 34, West Virginia 21

The Gamecocks should (better) get back on track with a win in their home-opener against Charleston Southern after giving up 15 unanswered fourth quarter points to North Carolina in a 24-20 loss in Week 1. If USC does not win this one, Will Muschamp will need to consider polishing up the resume he uses for defensive coordinator openings.

Something interesting to watch will be the debut of freshman quarterback Ryan Hilinski for the Gamecocks following Jake Bentley’s likely season-ending injury in the loss to UNC. Hilinski is the younger brother of former Washington State quarterback, Ryan Hilinski, who took his own life in January 2018, just days after leading the Cougars to a bowl win. I think it’s safe to say that we all wish Ryan and the Hilinski family well in everything they do moving forward.
PREDICTION: South Carolina 31, Charleston Southern 10

Both Vanderbilt and Purdue are coming off losses in Week 1, none more heartbreaking than Purdue’s 34-31 loss Friday night in Reno. Not only did the Boilermakers blow a 24-7 halftime lead, Wolfpack true freshman kicker hit a 56-yard field goal as time expired to give Nevada the victory.

Vanderbilt looked very overmatched, and they won’t be alone in 2019, to Georgia in a dull 30-6 loss to the Bulldogs. The Commodores still have questions at quarterback and Saturday at 11:00am local time in West Lafayette may be a little early to provide any correct answers.
PREDICTION: Purdue 45, Vanderbilt 14

Texas A&M turned this game into a classic last year in College Station with a fourth-quarter-comeback that fell just short of an early-season upset. Clemson gets the advantage of hosting this year’s game and that should be enough (along with really good players and depth on both sides of the ball) for the Tigers to improve to 2-0 in an early-season marquee matchup.
PREDICTION: Clemson 38, Texas A&M 21

I feel like Alabama should win this game.
PREDICTION: Alabama 52, New Mexico State 3

So, ummmmm. Georgia State, eh? Woof. Wow. Anywho, Tennessee somehow does what they should have done last week and gets in the win column at home Saturday night in Neyland Stadium.
PREDICTION: Tennessee 35, BYU 24

This SEC opener for both teams is very important… to these two teams. This one should be pretty entertaining.
PREDICTION: Ole Miss 32, Arkansas 28

Auburn will not have a letdown and will win this football game.
PREDICTION: Auburn 48, Tulane 6

This game deserves much more than a couple of sentences, but LSU’s behavior and performance in big games such as this follow a pattern and this game should be no different.

The Tigers jump out to a lead in the range of 28-10 in the first half, only to allow Texas to begin a mad-dash comeback early in the fourth quarter. The Longhorns get the ball back with less than two minutes remaining with a chance to win before the LSU defense makes a big stop near the goal line to get the huge win on the road.
PREDICTION: LSU 31, Texas 27

Eric Taylor is a software developer and is a proud seasonal contributor to FBSchedules.com. Follow him on Twitter @EricFromSpfld or contact him via email at [email protected]  Be sure to Like the Facebook page Facebook.com/EricTaylorWritesStuff  for the latest on the 2019 SEC Football Predictions as well as all the things.

This is a hard week to pick SEC teams, I would like to see Texas A&M & LSU win but hard to see happening.
The Aggies came close last year & I am sure the Clemson remembers that so I doubt this one will be close again, Tigers will be ready.
LSU is a toss up
I got Purdon’t beating Vandy & W Virginia beating Mizz, hopefully I’m wrong.

I think I missed the 52-3 pick last week… UT over Georgia State. Ha.