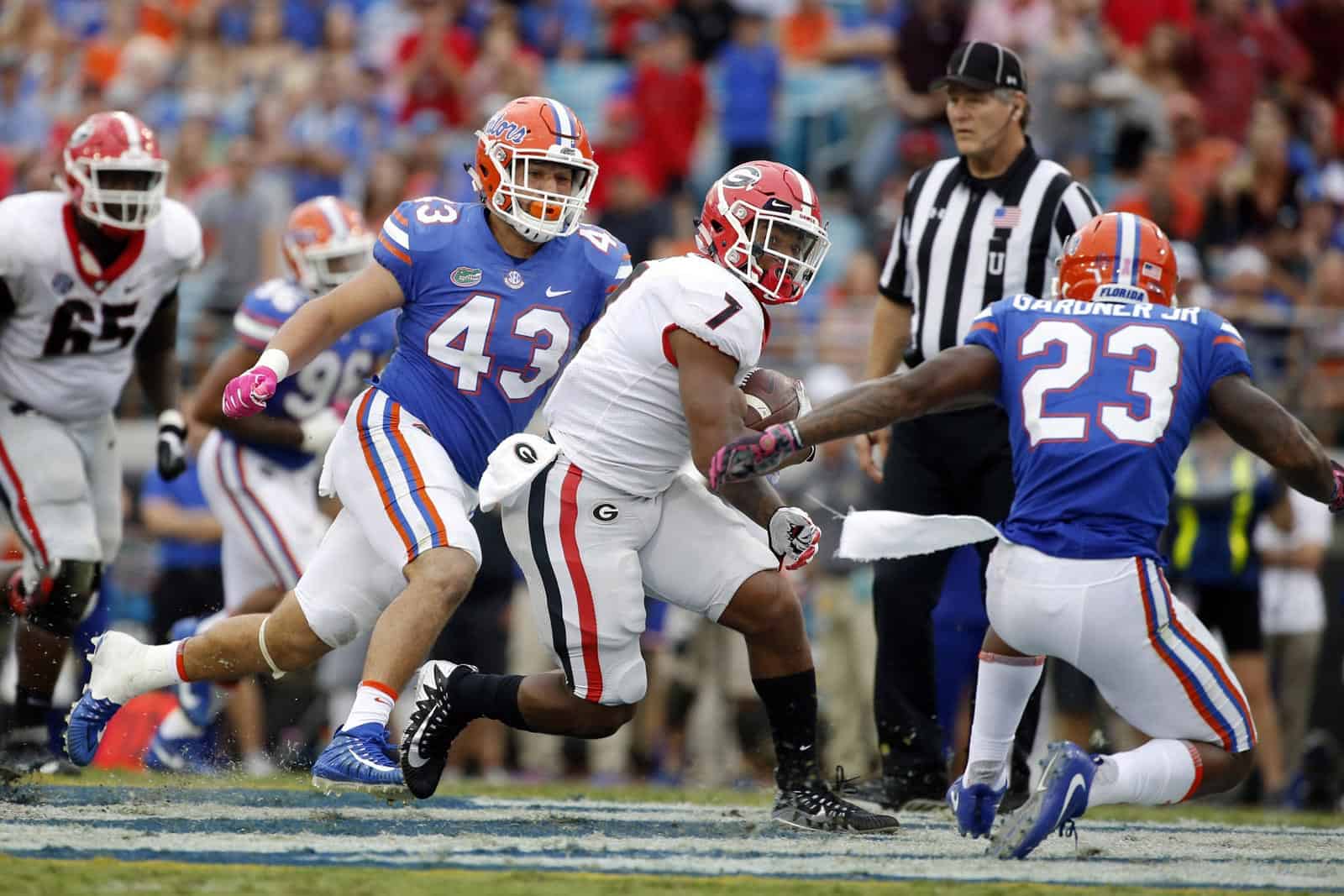 The cream is really about to rise to the top in the SEC East over the next two weeks. Florida and Georgia get together for their annual tussle in Jacksonville this week before Georgia travels to Lexington next week to take on Kentucky.

Let’s get through Week 9 before we look ahead to Week 10’s division deciding games.

A word of wisdom: Arkansas shut out Tulsa last week and Vanderbilt lost by seven to SEC East contender Kentucky. That’s about all we have on this one.
PREDICTION: Arkansas 21, Vanderbilt 10

A word of wisdom: The last time Georgia lost by at least three touchdowns, everyone wrote off Kirby Smart’s Bulldogs. An SEC Championship (and payback) win over Auburn and a Rose Bowl victory later, Georgia found themselves in the College Football Playoff National Championship Game against Alabama. And they nearly won.

Georgia has again gone from the ranks of being considered unbeatable to being undervalued. The difference in this group of Bulldogs and last year’s Georgia team is the lack of sustained dominating play on defense. This week’s opponent, on the other hand, seems to only be getting better with each passing week.

Dan Mullen and the Gators have beaten everyone on the schedule (including LSU) with the exception of… get ready for it… Kentucky… at home. October Florida looks to be light years away from September Florida. Mullen not only has the Gators playing turnover-forcing style defense, he has the offense playing smart and efficient on offense. Florida’s plus-nine turnover margin ranks just below LSU and Alabama in the SEC. Mullen’s most impressive work still remains his magic touch with quarterbacks.

Gators sophomore quarterback Feleipe Franks has improved his consistency by leaps and bounds in 2018. Franks has thrown 15 touchdowns compared to only five interceptions. The gunslinger impressed everyone in 2017 with his strong arm after the 65-yard rope he threw to beat Tennessee on the final play of the game. Franks’ arm strength was quickly equalized by his inability to consistently throw a pass to a guy wearing a Gators jersey. This season Franks has already thrown for six more touchdowns this season than he threw all of 2017.

As improved as the play of Franks has been, there is a bit of fool’s gold mixed in with the optimism. The sophomore has thrown three touchdowns and three interceptions in the previous three games. This includes a 12-for-27, 161-yard performance against LSU in a game the Gators won, but to say it was because of magical quarterback play would be a stretch.

Georgia has yet to develop an identity on offense or defense. The offense appears to have a problem answering the challenge of only having one ball per play to share with such a loaded backfield. The play from sophomore quarterback Jake Fromm has not been bad, but it hasn’t had the spark of last year either. The difference maker for the Dawgs might be yet another freshman quarterback. Justin Fields may not have a ton of yards on Saturday, but his spark and change of pace may throw Florida’s defense off just enough to swing the game in the direction of Georgia.

The true winner of this game may be sitting in Lexington if this game is a defensive slobber knocker like everyone is expecting. Lucky for Georgia, they get to travel to Lexington next week against the best scoring defense in the SEC.
PREDICTION: Georgia 24, Florida 20

A word of wisdom: Kentucky has proven it can beat Florida, but the Wildcats were dominated October 6th on the road in College Station in an overtime loss to Texas A&M. Kudos to the Wildcats for forcing the game into overtime when they had zero running game. Although the loss hurt, we saw that Kentucky can find ways to stay in games even when they have a bad night.

Missouri is a tough nut to crack. They’ve lost three consecutive games, but they held Alabama to 39 points in 2018. Alabama has scored 39 points by the coin toss in every game before and since. The Tigers are obviously good on offense, but the team has not been able to put together a complete game since the 40-37 win over Purdue way back on September 15th. Yes. The same Purdue that defeated Ohio State, 49-20, last Saturday night.

Missouri is ranked 35th nationally at stopping the run. If the Tigers can keep Kentucky’s Benny Snell under 100 yards in Columbia on Saturday afternoon, Kentucky’s matchup with Georgia next week in Lexington will take a sour turn.
PREDICTION: Missouri 31, Kentucky 23

A word of wisdom: Texas A&M is looking forward to seeing what their team can do in November with Jimbo Fisher. Past Aggie teams have left many scratching their heads in November over the last five years. Each season would start off with a bang. Five straight wins and a top-five ranking would be followed by a complete fall-apart after a blowout loss to Alabama.

Who knows what we will get from Mississippi State this week. The Bulldogs have played well, but they just seem a step behind everyone else. I think much of that has to do with a first-year head coach. If it comes down to the coaching matchup Saturday, Mississippi State is in trouble.
PREDICTION: Texas A&M 35, Mississippi State 20

A word of wisdom: Tennessee doesn’t quit. They gave up 58 last week at home against Alabama, but they played tough the entire game. South Carolina is about as average a team as you will ever find in the SEC.

The Gamecocks have turned the ball over four times when inside the red zone. They have also allowed the opposition to convert 5-of-8 fourth downs. The only team worse than the Gamecocks at first downs per game (22.7) is Tennessee (17.1).

If you’re looking for a close game, this could be one to watch. This matchup has historically been the most closely contested game in this history of the SEC. That’s the one thing this matchup has going for it this year.
PREDICTION: Tennessee 34, South Carolina 21

Slow week in the SEC, not much happening.
I’ll take Georgia to bounce back & beat Florida, Dawgs seem to strong to let this one get by them (Largest Outdoor Cocktail Party) there is.
I’ll disagree on the other as well, I’ll take Vandy over Sauce & S.Carolina over Tennessee.
I like Kentucky over Mizz but I can see why your predictions are this way, you are probably right. I am just going by records by I agree on A&M beating Miss St as well.