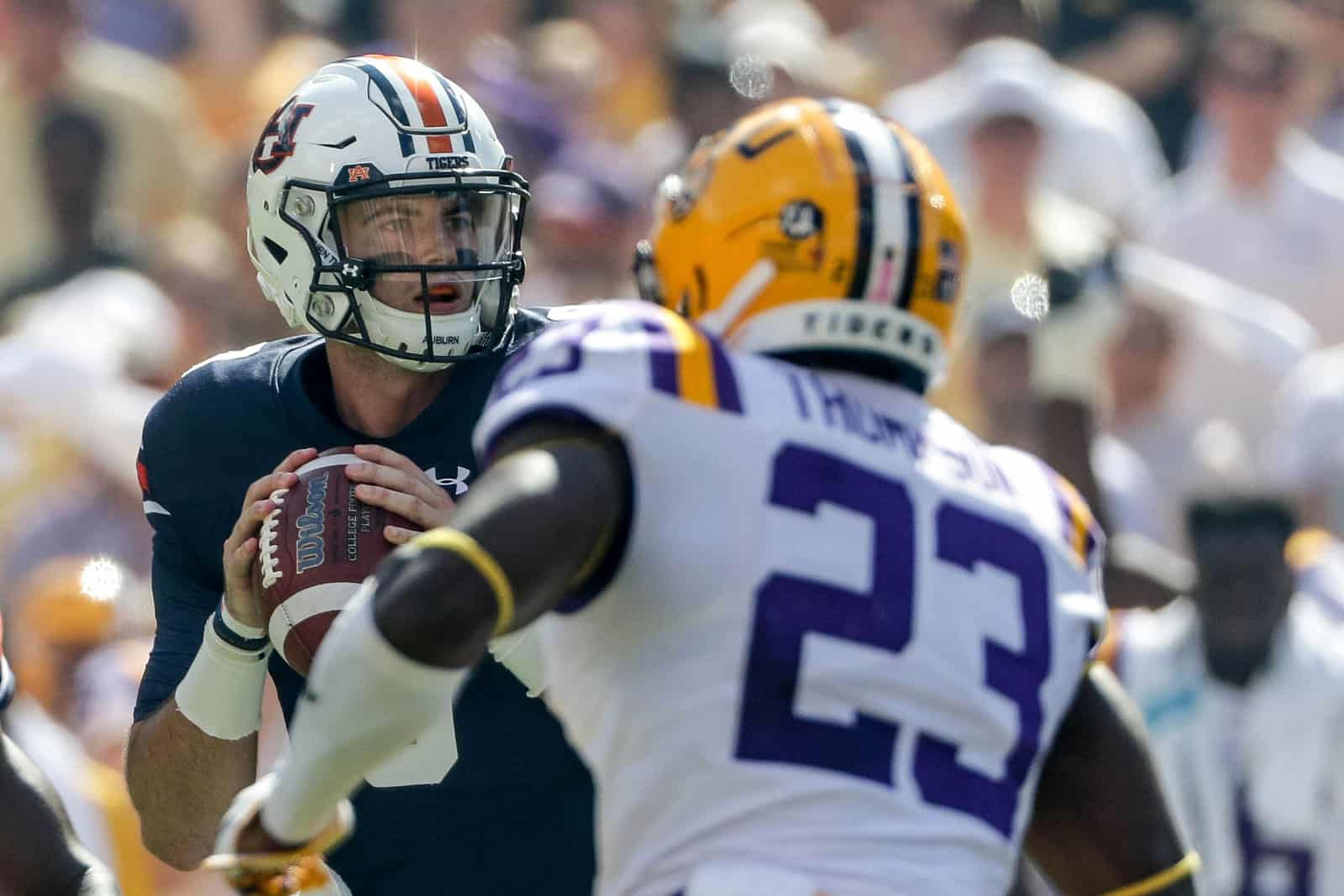 At the beginning of the season, Georgia was seen as an overwhelming favorite of the East. Although an overwhelming favorite, the Bulldogs were wary of dark horses in Florida and South Carolina. After just two short weeks into the season, the gulf that rests between Georgia and the rest of the SEC East grew even larger. So large, in fact, that the only remaining hope in the East, outside Athens, resides in Columbia (Missouri) and Lexington. Missouri and Kentucky were voted to finish fourth and fifth, respectively, by the media at SEC Media Days in Atlanta.

To review: Kentucky and Missouri are Georgia’s biggest challengers in the East. Also, the East is so weak that Georgia’s biggest obstacle to Atlanta is their SEC West schedule (at LSU on 10/13 and at home against Auburn on 11/10).

In all seriousness, our thoughts and prayers are with those battling the challenges brought on by Hurricane Florence. Many games will be canceled this weekend, which only strengthens the fact that college football is a great distraction from the ugly realities of life. We miss it even more when natural disasters strike down our Saturday distraction.

Quick word of wisdom: If Kentucky looks lighter, it’s because they are playing without a monkey on the their collective backs for the first time since 1986. The Wildcats went to The Swamp and finally defeated Florida last Saturday night. Florida did not make 20 unforced errors and Kentucky didn’t steal points (not counting the last play of the game). The Wildcats were pretty much dominant the entire game. Running back Benny Snell and quarterback Terry Wilson both eclipsed the 100-yard mark rushing. To be fair, Snell was in a league of his own, running for 300 yards and two touchdowns on 47 carries.

The Wildcats will now face a new challenge. The challenge of being an SEC East challenger. Can they take seriously the title of “SEC East Challenger”? They better, because no one else will until they prove they belong.
PREDICTION: Kentucky 45, Murray State 7

Quick word of wisdom: I hate to brag, but I nailed Tennessee’s Week 2 win over East Tennessee State. Please allow me to use the next paragraph to quote my prediction.

“I guess Tennessee will win this game.”

Sure. The proof from last week’s brilliance is right there in black and white, but what about this week? UTEP comes to town to give Jeremy Pruitt and the Vols an opportunity to gain a little more confidence for next week’s rivalry game against Florida. It was announced earlier in the week that Florida-Tennessee will be a night game in Knoxville.

Expect Tennessee to continue to improve and gain confidence as Jeremy Pruitt gets ready for his first Florida Week as Tennessee’s head coach.
PREDICTION: Tennessee 42, UTEP 14

Quick word of wisdom: Georgia is the heavy favorite and rightfully so. I graduated from MTSU, but I don’t think that spark of inspiration will be enough for the Blue Raiders.
PREDICTION: Georgia 52, MTSU 3

Quick word of wisdom: I’ll save you the three-paragraph breakdown before revealing an upset pick. Let’s just get it out of the way now. Vanderbilt will beat Notre Dame and it will not be a huge upset.

The college football world has not witnessed a vastly overrated team at No. 8 like Notre Dame since Week 1 of the 2018 SEC Football season when Miami laid an egg at midfield of the Jerry Dome against LSU.

I know it’s early, but Vanderbilt is categorically better than the Irish. The Commodores will go into South Bend and win. It will not be a game where Notre Dame hands them a victory with unforced errors and mistakes. The Irish will be surprised by the physicality of Vanderbilt and will never recover.

I know many are saying, “This is crazy.” My response to you is, “When has Vandy ever let me down when putting my faith in them to get a big win?” Oh yeah, every time. Well, today it all changes in South Bend. Anchor down, Vandy. Anchor down.
PREDICTION: Vanderbilt 27, Notre Dame 17

Big game word of wisdom: Auburn comes in prepared to prove that last year’s complete choke in Baton Rouge was a fluke. They also hope to prove that LSU’s impressive start to 2018 is a fluke as well.

The SEC West appears to be as loaded as it has ever been, so the stakes are even higher than normal for division games. This will be the first of many games in 2018 that will be regarded as a “Crucial SEC West match-up.” I’d like to say the winner will separate themselves from the loser, but Auburn has played for the SEC Championship twice (winning in 2013) after losing this game since 2013.

Auburn has the advantage at quarterback and the defense should be, at the very least, equal to LSU’s. That’s actually being very kind to LSU, as Auburn has possibly the best front seven on defense in the nation. At the end of the day, both teams have a ton of talent on both sides of the ball. LSU is not a three-touchdown underdog with no talent. They have athletes that can compete with any team in the country. The question with the Tigers from Baton Rouge is the same question we’ve had for ten years. What about quarterback?

Junior Ohio State transfer quarterback Joe Burrow is trying to become the quarterback LSU fans have been begging for all these years. He’s not exactly Peyton Manning on the field thus far, but he’s been serviceable. With that being said, Burrow has completed only 47.7 percent of his passes and has thrown only two touchdowns. Some say he hasn’t needed to throw very much to win, so the coaching staff hasn’t asked him to throw it around the field. Another group may say the coaching staff doesn’t trust Burrow enough to allow him to sling it around. You wouldn’t be wrong believing the latter of the two.

Don’t be surprised if Auburn cannot cover the 10.5-point spread, but don’t look for many points from the LSU offense. I see this one being similar to many games in this rivalry. Expect a low-scoring, defensive, and physical struggle.
PREDICTION: Auburn 17, LSU 7

Quick word of wisdom: Colorado State must spend practices only going over what they will do in the second half of a game. At least that was the case last week at home against Arkansas. The Rams trailed 27-9 in the third quarter before storming back for 25 unanswered points in the 34-27 win — the Rams first of the season.

Florida is coming off a loss to Kentucky for the first time since 1986, so who knows where the Gators heads will be for this one. Kentucky manhandled Florida at the line of scrimmage, but Colorado State should not be as physical as Kentucky. Dan Mullen will need to build some form of confidence in his Gators this week or his tenure in Gainesville will become an even bigger rebuilding project than originally planned.

Florida travels to Knoxville for their first road game of the 2018 season next week. The Gators need to take as much momentum as they can from this game with Colorado State because Neyland Stadium will be rocking for the nighttime kickoff in seven days. It’ll be close, but the Gators should board the plane next week with a 2-1 record.
PREDICTION: Florida 31, Colorado State 23

Quick word of wisdom: The Hogs open as only a seven-point favorite over the Mean Green of North Texas. I assume this is because they blew a 27-9 third quarter lead at Colorado State last week and the fact that North Texas is much improved this season. The Mean Green aren’t exactly winning any awards for toughest strength of schedule, but the passing game they possess is lethal. They rank No. 1 nationally in passing yards per game. Junior quarterback Mason Fine has already thrown for nearly 900 yards in two games and he could very well go for over 350 yards in this game against an Arkansas team still trying to find their way under first year coach Chad Morris.

The Razorbacks bring the 117th-ranked pass defense to the field to combat this North Texas passing attack. Hog fans will be beside themselves if Arkansas can’t shore up the defensive backfield struggles quickly against the Mean Green.

This game will get people’s attention as the Alabama-Ole Miss broadcast gives the studio update with news of the upset in Fayetteville.
PREDICTION: North Texas 35, Arkansas 31

Quick word of wisdom: Can Ole Miss score enough to beat Alabama? Can the Rebels stop anyone in college football on defense? Will Alabama make three consecutive extra points? The answer to all three of these questions is probably a resounding, “No.”

Ole Miss can score a ton of points, but dang. They allowed 41 points to Southern Illinois. Not just 41 garbage points. These were legit, back and forth, numerous lead changes and this is still a game, 41 points. Ole Miss led 42-41 late in the third quarter before the Salukis began leaking oil all over Oxford.

The Rebels scored a cool 76 points on Saturday night. The Ole Miss basketball team scored less than 76 points 15 times this past season. Seventy may become a familiar number in Oxford in 2018, but it will be on the wrong side of the scoreboard Saturday night. Tua Tagovailoa should put up numbers to match the Heisman hype he’s receiving. When all else fails, Alabama will be forced to hand the ball to one of its 24 running backs.
PREDICTION: Alabama 73, Ole Miss 27

Big game word of wisdom: Mississippi State is just another SEC West team that looks legit thus far in 2018. The Bulldogs went to Manhattan, Kansas, last week and took a plug out of the Wildcats. Sophomore running back Kylin Hill ran for 211 yards and 2 touchdowns on 17 carries in the win. He also caught one pass that he took 16 yards to the end zone. Yes, Mississippi State is legit.
PREDICTION: Mississippi State 44, Louisiana 13

Quick word of wisdom: Could Texas A&M been any closer to beating No. 2 Clemson Saturday night? I don’t think so. The ball that was ruled a fumble out of the end zone appeared to land about 14 rows up in the sideline stands. The best method to avoiding a bad call ruining your night is holding on the ball and taking the game out of the referees’ hands. No matter how you look at it, Texas A&M is yet another team in the West looking to give Alabama fits in the race to Atlanta.
PREDICTION: Texas A&M 49, ULM 17

Quick word of wisdom: Missouri squeezed out three points in last year’s 35-3 blowout loss in Columbia. Now, Purdue is coming off losses to Northwestern and Eastern Michigan as they prepare to face the much-improved and much more impressive Tigers. Missouri is better and they have the revenge factor to feed the week’s preparation. Purdue needs to be prepared for a nasty beating at the hands of Missouri. It’s going to get ugly early and often.
PREDICTION: Missouri 66, Purdue 21

Great commentary on these picks. I think you may be drinking a little too much of the Vandy kool aid. Think ND wins relatively easily, Arkansas gets the win as well as Purdue gets their first win of the year vs Missouri.