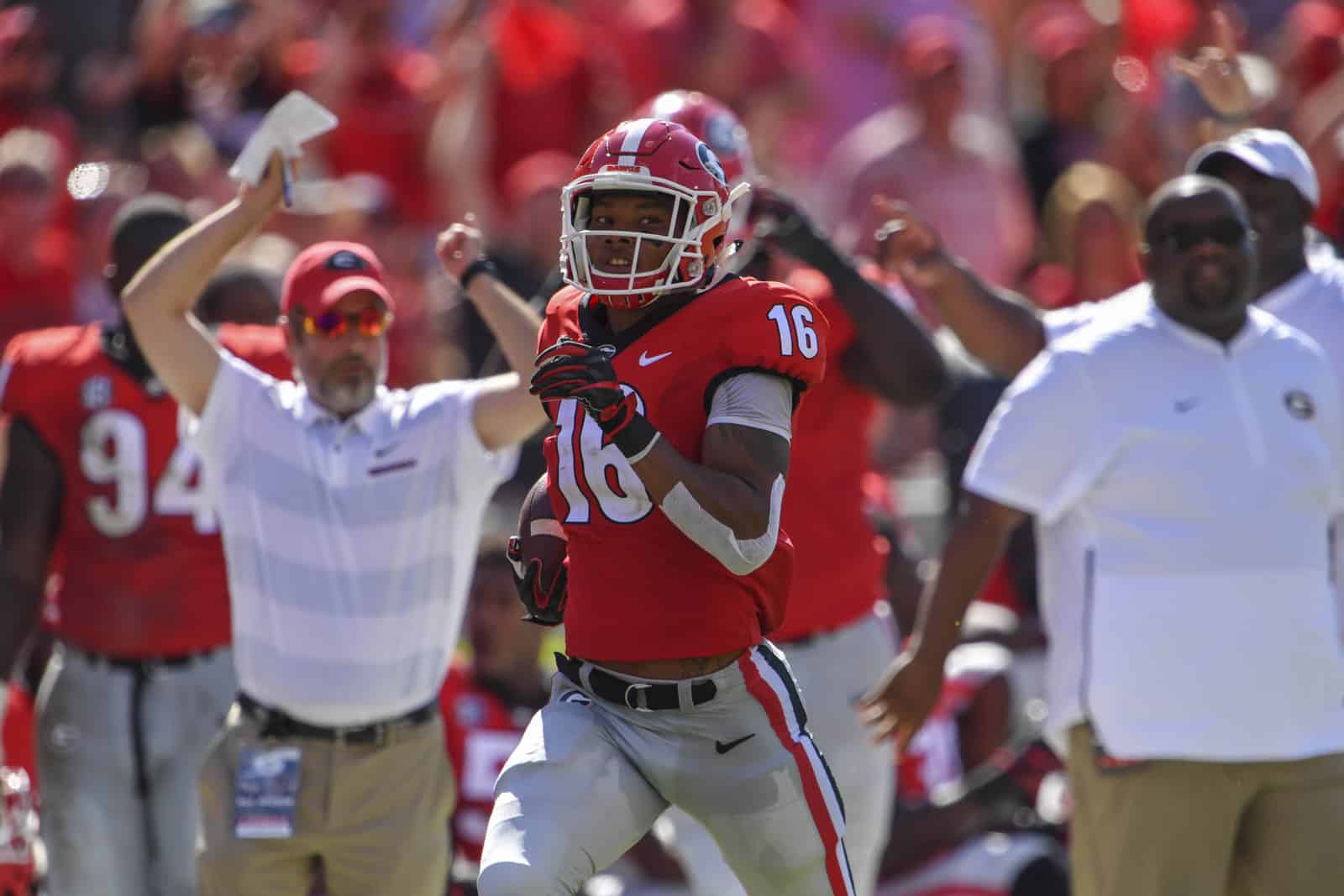 Although Week 1 of the college football season was not loaded with marquee match-ups as in past seasons, the payoff comes in Week 2. In past years, Week 1 has featured some huge games while Week 2 was nothing more than a tax write-off for the elite programs as they played small schools looking to sacrifice their inferior players in order to receive a paycheck big enough to fund the athletic department’s fiscal year budget.

Week 2 of the 2018 SEC Football season is not great, but it has a couple of intriguing road games for two top-three teams that could result in a loss early in the season. No. 2 Clemson travels to College Station to take on Jimbo Fisher’s new Texas A&M Aggies while No. 3 Georgia travels to Columbia for a dangerous game against a healthy Deebo Samuel and the South Carolina Gamecocks.

Oh, yeah. Don’t forget about the 32nd season of the television show, “Is This The Year Kentucky Beats Florida?”

Week 2 of the 2018 SEC Football Predictions is here. Let’s predict some football games.

Quick word of wisdom: A trip to the Little Apple will be Joe Moorhead’s first road game as head coach of the Bulldogs. This would be a tough undertaking in years past, but a healthy Nick Fitzgerald should be enough for Mississippi State to leave Manhattan with a win.
PREDICTION: Mississippi State 35, Kansas State 21

Quick word of wisdom: Vanderbilt is coming off of a 35-7 win over Middle Tennessee while Nevada comes to Nashville with a 1-0 record after beating Portland State 72-19. A Vanderbilt win could create a little momentum for the Commodores’ trip to South Bend to take on No. 9 Notre Dame.
PREDICTION: Vanderbilt 31, Nevada 21

Quick word of wisdom: Arkansas State was a one-year training stop for Hugh Freeze and Gus Malzahn in back-to-back years in 2011 and 2012, respectively. Speaking of Auburn coaches, former Auburn assistant Trooper Taylor is listed as assistant head coach and cornerbacks coach in Jonesboro. He should receive a warm welcome in Tuscaloosa on Saturday afternoon.

The Red Wolves lost their best offensive weapon for the season when Oklahoma transfer wide receive Dahu Green was injured in the 48-21 season-opening win over SEMO.

Alabama has Tua and that should be enough.
PREDICTION: Alabama 55, Arkansas State 7

Big game word of wisdom: Most everyone that has ever watched a college football game is pointing to this game as the upset of the year. The problem with this is the word “upset” becomes a little watered down when everyone is picking the underdog. This is something Georgia will see more and more as they develop into a perennial top 3 team. Every road game against a team not in the FCS will become THE game that the season will come crumbling down. That is what we are seeing now.

Gamecocks fans believe beyond a shadow of a doubt that they will win. And rightfully so. It happened in 2010 when No. 1 Alabama came into Williams-Brice Stadium and left with the programs first regular season loss since 2007. Georgia brought a No. 5 ranking to Columbia in 2012 before getting destroyed 35-7. That was the same Georgia team that fell five yards short of an SEC Championship and an almost guaranteed win against Notre Dame in the BCS National Championship game.

All of the above takes into account zero statistics and zero players that are on current rosters, but history is a major player in college football (see Kentucky-Florida prediction below). The college game is almost like a court case. Precedent plays an important role in big games. When a team has never won a big game against a higher ranked team, precedent usually wins out. I’m not saying South Carolina will win, but I’m saying they’ve done it before and the Gamecocks fans know how to get loud enough to become a factor in the outcome of a game.

Georgia may not be as good as they were in 2017 — at least not yet anyway — but I think they have enough horsepower in the backfield to pound out an ugly victory in Week 2.
PREDICTION: Georgia 17, South Carolina 9

Quick word of wisdom: So much for Ole Miss not being competitive under the weight of NCAA probation and the inexperience of Matt Luke as a head coach. The Rebels traveled to Houston last week and dominated Texas Tech for four quarters. The run game was impressive. More specifically, junior running back Scottie Phillips made his debut for the Rebels and all he did was run for 204 yards and two touchdowns while earning SEC Offensive Player of the Week honors.

Like LSU, Ole Miss is coming into a week where a letdown is almost inevitable. Luckily for both teams, the competition will not be strong enough to take advantage of the letdown. Ole Miss wants to stay healthy and add another win to a season where playing spoiler will be the Rebels’ role in multiple weeks. The first big spoiler test comes next Saturday night when No. 1 Alabama visits The Grove.
PREDICTION: Ole Miss 52 , Southern Illinois 0

Quick word of wisdom: Either Miami was way overrated or LSU is way better than we thought. I think it’s something between the two, but the Tigers looked very good Sunday night at Jerry’s World in their 33-17 dismantling of the Hurricanes. Whatever the case may be, Ed Orgeron’s Tigers jumped 14 spots from No. 25 all the way up to No. 11 in the AP Poll.

LSU will more than likely have a letdown in this sammich game a week after Miami and before heading to Auburn next week. Lucky for the Tigers, the Lions will provide a soft landing as they come down from the high of Sunday’s victory.
PREDICTION: LSU 44, Southeastern Louisiana 10

Quick word of wisdom: Missouri needs to use the next two weeks as a catapult for momentum. They welcome the Cowboys of Wyoming to Columbia this week and will travel to Purdue next week before hosting Georgia on September 22. Drew Locke should throw for just under 500 yards and a few touchdowns in this one.
PREDICTION: Missouri 63, Wyoming 24

Big game word of wisdom: This game is ranked No. 4 in my Top ten games for head coaches at new schools in 2018. And for good reason. What better way for Jimbo Fisher to loudly make the nation aware that he intends on A&M being a force in the SEC than to beat an old ACC foe in No. 2 Clemson.

The Aggies have talent at running back with junior Trayveon Williams, but most assume Clemson will dominate up front and stop the run. The question mark for A&M will be how sophomore quarterback Kellen Mond can perform. Any hopes of upsetting Dabo and the Tigers Saturday night at Kyle Field rest on the arm and legs of Mond. If Mond can extend plays and make a few throws after escaping the pocket, A&M can keep this interesting longer than a half. Mond will obviously be under pressure against one of the nation’s best defensive lines, so his ability to be accurate on the run will determine if this is a game late in the fourth quarter.

Even if Mond can do all those things perfectly, I think Clemson will make at least one more play than A&M when needed. That being said, the Aggies are on the right path to success under Jimbo Fisher.
PREDICTION: Clemson 34, Texas A&M 17

Quick word of wisdom: Arkansas and Mississippi State make road trips in Week 2 that could be considered impressive when the games were scheduled, but they are both at least a touchdown favorite to win.

Arkansas should be 3-0 heading into the September 22nd game at Auburn. Although Colorado State will provide no atmosphere compared to Jordan-Hare, any road win is a good win early in the tenure of a new coaching staff. The Razorbacks won’t be great in 2018, but a win Saturday night in Fort Collins will get them one win closer to a bowl game.
PREDICTION: Arkansas 43, Colorado State 13

Quick word of wisdom: Auburn is another team that is more than happy to open the home schedule with an “easier” opponent coming off a big Week 1 win. The Tigers just want to stay healthy and get through this glorified walk-through before LSU heads to town next Saturday.
PREDICTION: Auburn 66, Alabama State 0

Quick word of wisdom: Feleipi Franks still looks raw as a young QB in the SEC. Against Charleston Southern, Franks didn’t appear to go through his progressions very effectively. His arm is strong, but the decision making still needs work.

By no means does Feleipi Franks being raw give Kentucky an advantage over Florida at quarterback. The Wildcats used both Terry Wilson and Gunnar Hoak at quarterback in a 35-20 victory over Central Michigan. While Wilson was 11-of-18 passing, he had only 78 yards passing and threw two interceptions.

Kentucky’s running game, on the other hand, was very impressive Saturday afternoon in Lexington. Sophomore running back AJ Rose ran for 104 yards and two touchdowns on only eight carries. Rose’s 55-yard touchdown run late in the first quarter bolstered his gaudy 13-yards per carry average. Then there’s Benny Snell, Jr. The junior carried the ball 20 times for 125 yards and two touchdowns.

The Wildcats may be able to pound the ball against an always strong Gators run defense with two physical backs like Rose and Snell. The numbers won’t be impressive, but controlling the clock and pounding until they can break one or two big runs could be the key to victory for Kentucky Saturday night in The Swamp.

The biggest key to victory in this game for either team is history. Forget the “History doesn’t affect this year’s game” coach speak. If that was true, Kentucky would have ended this streak already. If you believe the Wildcats didn’t allow History to become the unbeatable 12th man on the field last year, you don’t understand college football. History and home field will be the difference in this one Saturday night.
PREDICTION: Florida 26, Kentucky 20

I’ll take Bama 45-7 over Ark St
I will be pulling for A&M but think Clemson is too tough again, Tigers 31-20
Every time I think Kentucky can pull out a victory over the Gators, I loose. Just because the Gators are at home plus the Wildcats did not look good last week, I’ll take Florida.
Miss St should be good this year, even though they have a new coach, hopefully they can go on the road & pull off a victory over the Wildcats.

You about nailed the Bama pick. A&M didn’t get the right call in the end zone fumble, but the best way to guarantee a good call there is not fumble. And Florida did everything I said they would do. For some reason I thought history would overcome Florida’s shortcomings. Ha.