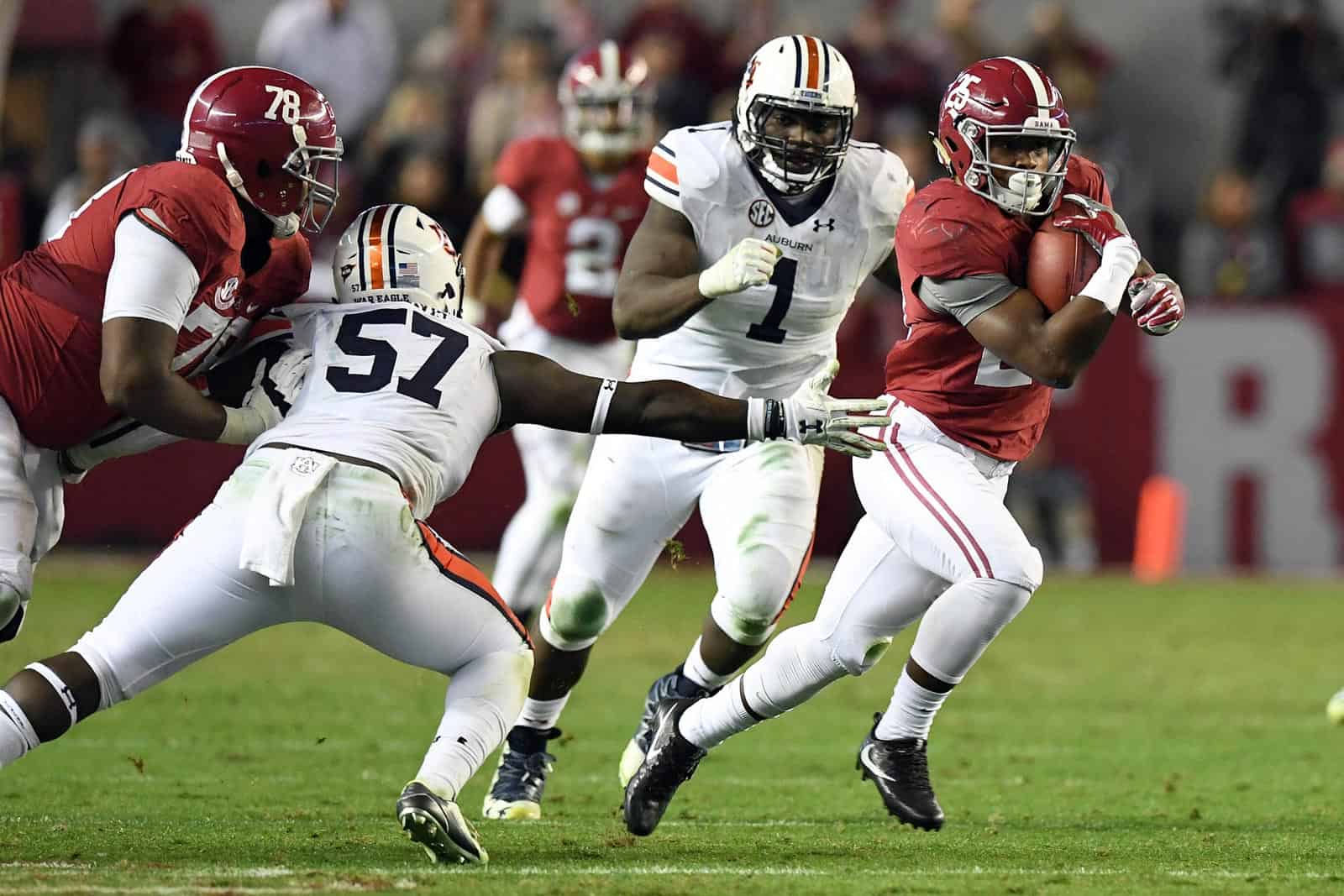 Week 13 is Rivalry Week. If I need to write more to get you fired up, then you’ve clicked the wrong article.

Our most sincere thoughts and prayers to the family of Finebaum caller, Tammy Bullard. She is what makes college football what it is. Logic and reason have no place in fandom and she used none of it when discussing (shouting about) her Auburn Tigers. And that’s the only way it should ever be. Roll Tide and War Eagle, Tammy.

A word of wisdom: Arkansas will finish the season winless in the SEC, but Chad Morris will continue to implement his system in Fayetteville. Hog fans need not expect to see winless conference records in the future.

Missouri will win and move to 8-4 overall, earning the Tigers a trip to Nashville for the Music City Bowl or a similar tier bowl.
PREDICTION: Missouri 54, Arkansas 13

A word of wisdom: Georgia Tech ranks first in the nation in rushing offense, gaining 353.7 yards per game. The Yellow Jackets passing game ranks 126th nationally, slinging the ball almost the length of an American football field (83.7 yards per game).

Georgia and Kirby Smart are experiencing the “transition” many expected in year three after losing the stable of studs they had on defense in 2017. The run game does not produce the same inflated yards as the Georgia Institute of Technology, but the pile of running backs the Bulldogs can throw at the opposition can do much more damage over four quarters. Expect some of the same from the 10th best running game on Saturday afternoon in Athens. Don’t be shocked when Georgia Tech looks unstoppable on offense for a quarter or two.
PREDICTION: Georgia 38, Georgia Tech 27

A word of wisdom: This isn’t exactly Danny Wuerffel vs. Charlie Ward, but Chris Weinke is expected to tell stories at halftime about how he fought in World War II before heading back to college in 2000 and winning a Heisman Trophy as a geriatric gunslinger.

Florida will make enough plays on defense to pull away late to win a very chippy and intense battle.
PREDICTION: Florida 24, Florida State 14

A word of wisdom: The Iron Bowl is back and Alabama has revenge on the brain. Auburn has memories of last year’s upset on The Plains and they have to keep that game in mind as no one gives them an ounce of hope to win in Tuscaloosa on Saturday.

Tua Tagovailoa appears to be as healthy as he’s been since September. A healthy Tua will be unstoppable on Saturday. Auburn’s defense is good, but not good enough to stop Tua enough times to keep the score manageable.

So much has been said and written about both these teams this season. The hard facts are Alabama’s defense looks vulnerable until they are forced to be the primary source of success. When handed that task, all the Tide defense did was allow zero points against LSU and Mississippi State in back-to-back weeks.

Auburn has nothing in the trenches and the offense is very stale. I see Auburn keeping it close early, but it won’t last long. Alabama will score as much as they can without mercy, if given the opportunity. Bama fans inside Bryant-Denny Stadium will go bonkers as they sing Dixieland Delight at the top of their lungs with the game well in hand and a trip to Atlanta and possibly the CFP well within their sights.
PREDICTION: Alabama 53, Auburn 6

A word of wisdom: The big story everyone enjoyed telling with a smirk years ago was how Tennessee hired General Robert Neyland to beat Vanderbilt. Now Tennessee loses to just about everyone in the SEC, including Vandy. Things appear to be going in the right direction in Knoxville with Jeremy Pruitt behind the controls, but a new two-decade-long win streak will need to wait at least one more year as Vanderbilt becomes bowl eligible once again.
PREDICTION: Vanderbilt 45, Tennessee 21

Clemson is better and they will win. They are peaking at the right time and are easily the second best team in the country. I don’t care how much of an in-state rivalry this is. The Gamecocks aren’t leaving Clemson with anything resembling a win.
PREDICTION: Clemson 63, South Carolina 13

LSU is good. They have only two losses. One to Florida and one to Alabama. They handed Georgia a 20-point whooping and still have a shot to finish in the top five before all is said and done.

Texas A&M has been hit-and-miss since losing in Tuscaloosa earlier in the season. LSU should dominate up front, out back, and down field all night.
PREDICTION: LSU 23, Texas A&M 10